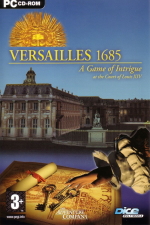 Versailles: 1685 is a historical adventure set in France in the time of Louis XIV. You take the role of a security guard, tasked with preventing an explosion in the famous museum. The series continues with the sequel, Versailles 2: Testament of the King.

Read about each of the characters in the King's bedchamber, then go through the only available door into the Bassano Antechamber. Turn around and talk to the usher, who will not let you back into the previous room. Look at the picture over the fireplace, then search the vases here to find Small Key 1 within the third one. Turn around and go through the door.

Talk to Charles Le Brun, the artist who is standing in front of the fireplace, and offer to find his missing sketches - he will leave. Turn right until you can see 2 doors, and head through the left one. Open the curtain to let some light into this room. Turn right to see a series of 6 cupboards. Open the 2nd cupboard and a drawer inside to get some scissors. Open the 5th cupboard and a drawer inside to get Pamphlet A. Now leave the room and you will head upstairs.

Continue through the door to the left of the fireplace, then turn left and head through the door to the right of the large windows to go further upstairs. Walk further ahead to find yourself in a small bedchamber. Look at the small casket on the floor, and open it with the scissors. Take out the paper from inside. Next look at the desk and use the blank paper on the candle to see the hidden message "The Hawk and the Little Birds". Leave this room and go back downstairs.

Go through the opened door straight ahead. Talk to the usher here and tell him that Monsieur Bontemps is expecting you.

From Rising to Council

Go through the open doors in the corner of the King's salon to enter the King's bedchamber. Talk to Alexandre Bontemps, who will ask you to speak to Madame de Maintenon. Turn left and enter the Bassano Antechamber, then continue through the door to the right of the 2 cabinets with vases. Proceed through the right door here to find the guard room, and keep going straight ahead into the next room. Show Pamphlet A to the usher and you will receive Pamphlet B. Speak to the usher again and ask him to pass on a message. Now make your way back to the King's bedchamber.

Show the transformed paper to Alexandre Bontemps and talk to him about it. Open the cupboard behind him and take a candle and a key. Go into the Bassano Antechamber again and use this key on the right cabinet. Take out the sketch folder. Go back through the King's bedchamber into the King's salon, automatically talking to Monseigneur. Give him the sketch folder, then head out through the tall doors into the Hall of Mirrors.

Turn right and go along the hallway twice to reach the Salon of War. Turn left and give the sketch folder to Charles Le Brun - you will get to keep the fake sketch. Use this on the painting table here. Pick up a brush and dip it in the gold paint, then use this on the sketch to reveal the message "The Ducks and the Spaniel".

Go back out to the Hall of Mirrors, where Alexandre Bontemps is waiting just to the left. Show him the fake sketch.

From Council to Mass

Back out and return to the Salon of Diana. Talk to the Swiss guard and ask about the small door. Go through one of the other doors here to find the Ambassadors' Staircase. Go down the stairs and talk to the Swiss guard here, asking for the key and saying you are on a mission from Monsieur Bontemps. Return up the stairs, then go left through a few rooms to return to the Salon of Apollo. Use your new key on the small hidden door here.

Turn left so you are walking away from the fireplace, and go forward until you are in a small gallery behind the Salon of Mars. Examine the musical score in front of you and turn the pages until you take one. Continue forward towards Jean-Baptiste Lully. Give him the musical score, then agree to help him by asking Monsieur Racine a question. Go back through the small hidden door, then make your way to the Salon of Mars. Open the drawer within the right cabinet here to find Small Key 2.

Go back out to the Salon of Apollo and turn left to enter the Salon of War. Look at the small table and take the plain paper and charcoal pencil. Go down to the bottom of the Ambassador's Staircase, then continue forward to end up in the Royal Courtyard. Go left, then turn left and talk to Alexandre Bontemps - tell him about the new message, then show him the musical score. Now ask for permission to enter the King's Cabinet of Curiosities. Go back inside and make your way back to where you started in the Salon of Abundance. Show your authorization to the Swiss guard here, then go through the doors. Open the drawer in the small table here to take out some medals. Place the plain paper on them, then use the charcoal to create a reproduction.

Starting in the Hall of Guards, go through the open door ahead. Continue through a door on the right into the Queen's Staircase. Go down the stairs once and turn around, then take some food from the guard on the stairs. Go further downstairs to end up out in the Royal Courtyard. Turn right and go forward through the gates to approach the Ministers' Wing, then turn right and head inside.

Turn left and enter the Marquis de Crossy's office. Give him the food and he will leave. Look at the desk here and pick up the quill, then use it on the paper. Now you need to click on letters in the message here based on the information from Pamphlet B (1, 7, 5, 12, 11, 13, 31, 25, 26, 17, 20) to spell out "Fox and Crane". You will take this as an epigraph. Back out from the desk and search the bookshelves to the right to find Pamphlet D.

Go all the way back to the Hall of Guards. Show Pamphlet D to Alexandre Bontemps, then show him the epigraph. He will now ask you to investigate Monsieur de Louvois' office.

Return to the Ministers' Wing, and this time turn right to enter Monsieur de Louvois' office. Take the telescope, then search the desk to find a memo. Look at the bottom of the shelves to the left to find a small door with a panel that requires a number combination. Back out for now and head back to the Hall of Guards. Listen to the conversation of the two closest men to hear the year 1643. Go through the door next to the usher to enter the Bassano Antechamber. Go through the doors near the fireplace to reach the Hall of Mirrors. Use your telescope on two parts of the ceiling to see the years 1674 and 1668.

Go to the Ministers' Wing and enter Monsieur de Louvois' office again. Look at the panel at the bottom of the shelves and open it by entering the 3 years (in any order): 1643, 1668, 1674. Take out the two plans. Go across to the Marquis de Crossy's office and use these on the plans already on his desk, to reveal the message "The Cock and the Diamond".

The King at Work

This act will start in the Salon of Mars. Turn left and look at the large painting on the wall. Use your billiard cue to get Pamphlet C from the side of the painting. Go through the door to the left to the Salon of Diana, then head downstairs using the Ambassadors' Staircase. Turn left at the bottom and go through the gate into the chapel.

Turn right and go through the door. Search the small drawers here to get Small Key 3 and an engraving. Back out and turn right to pick up a cord from the floor. Return to the Salon of Diana and look at the plans on the billiard table. Next go to the Salon of Venus. Ask Alexandre Bontemps about the Salon of Jupiter (this is the old name for the Salon of War). Go back to the side room in the chapel and talk to Pere de la Chaize, asking for help regarding a text. Show him Pamphlet E.

The Promenade in the Gardens

Starting in the Orangery, turn left and walk forward, then turn right and walk forward twice. Look at the bases of the orange trees here, and pick up the tool from the ground. Turn around and walk directly away from the center of the garden to head to the Apothecary. Find the only medicine here that you can pick up (just right of the door), then go out through the door. Head straight across the center of the garden and talk to Andre Le Notre about everything - he does not know about any keys here. Turn slightly left and walk forward into a maze.

Turn left and walk forward until you reach a gazebo. Talk to Duc du Maine, mentioning your mission for Monsieur Bontemps. After your conversation, leave the gazebo then come back again. Talk to Duc du Maine again, who wants some medicine. Give him the medicine you picked up earlier. After he leaves, pick up the plan of the maze he leaves behind. Each of the statues within the maze on the plan is assigned a Roman numeral. You need to visit the statues mentioned on the Fables list, in ascending order based on their Roman numerals. As you do this use the information from your Memorandum to select important letters from the plaques at the statues. This is the information you will collect:

When you have seen them all, go back to the maze entrance and talk to Alexandre Bontemps, agreeing to leave.

From Supper to Bedtime

Save your game, as you need to complete the remainder within 5 minutes.

Turn right and enter the King's Salon, then turn around and take the candle snuffer. Return through the previous room and into the Bassano Antechamber, then go right into the Hall of Mirrors. Use the tool from the garden on the closest orange tree to your left to find Small Key 4. Turn around and return to the Bassano Antechamber. Light your candle using the fireplace, then use it on the door to the left so you can head upstairs. Go through the door ahead.

Turn right and walk forwards, then go through a low doorway to the right. Use your candle snuffer to reach the bomb and bring it closer to you. Insert your 4 small keys in the 4 locks, in ascending order from left to right. Now look closely at the device to see a large grid of letters. You need to enter the full phrase that you learned in the maze, by clicking on the letters to change them: