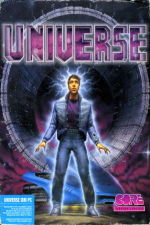 Universe is a traditional third person adventure game with a science fiction setting. You take the role of Boris Verne, cast into a parallel universe by your uncle's Virtual Dimension Inducer. You must travel through space to locate the defeat the Golden King.

Walk west, then south twice. Pick up the bent metal bar, then head north twice and east twice. Take the piece of circuit board. Now stand in the middle of the screen and wait for an asteroid to spin in from the west. Time a jump on to its surface. Wait until you go east, then jump on the duct and you will be back at your starting location.

Walk to the satellite dish and insert the metal bar into the panel, then insert the circuit board. Use the panel and a terminal will be shown. Select "Connect channel", then "Gavric Homeworld". Use the panel again, and "Set filtration system", then "Gavric Homeworld" - make sure you turn it off. Walk north over the bridge, then push the larger of the two ventilation shafts on the left and you will be sucked through.

Pick up the mirror, then walk west and south. Wait here, then jump on the asteroid again. Wait to go east one screen and jump on the duct as before. Walk north, then northwest. Wait for the robot to leave the screen, then throw your mirror at the door to destroy the two lasers. An alien will tell you to go and see Silphinaa. Use the console at the other door, and talk to Silphinaa until you are allowed inside. Say that you don't know where you are, then after the conversation attack the door's keypad with your metal bar. You will head upstairs.

You will have a vision of Baro Kaleev, then meet Snorglat the trader. Talk to him, introducing yourself, then saying you have nothing to trade. Use the screen in the middle of the console, and "Navigate course". Click on the planets to locate Balkanos 7, then "Lay in course" to that planet.

When you arrive, use the screen to "Descend to planet", then "Select quadrant" and choose the northeast quadrant. Head north and pick up the droid, then go east and south twice. Pick up the canister, and combine it with the droid. Head west twice, then north to find your car. Use the droid on an alien to get rid of them all. Jump into your car again. Using the screen, "Ascend from planet", "Navigate course". Set a course for Jor-Slev 4.

"Descend to planet", "Select quadrant" and go to the northwest quadrant. Walk east and pick up the rock. Throw the rock at the alien, then used the droid on the blob - you should now have some blobs. Go back west to your car and jump in. "Select quadrant" and go to the southeast. Walk west twice and talk to the alien until you can offer him blobs - trade these for some carvite. Go east twice and jump in your car again. "Ascend from planet", "Navigate course" and set a course for the Pfenellop Asteroid Cluster.

On the way, you will be intercepted by Snorglat again. Offer him the carvite crystals and he will take you to Wheelworld. You need to dock with his ship - use the left mouse button to guide your ship and the right mouse button to activate the claw.

After you arrive at Wheelworld, talk to Snorglat (any option) and he will paralyze you and take the carvite. Jump back in your car and set a course for Landing Bay Ref.40e. Push the droid, then pick up the cable before jumping back in the car. Now head for Landing Bar Ref.1h. Walk east through the gateway, then pick up the blue flask before continuing east and north. Insert your ID card into the dispenser, then select "Order" to get some synthetic carvite. Walk west and through the door into the bar. Play a game of Space Invaders on the console on the right (just for fun), then talk to the guy sitting by himself (use options 2, 2, 2).

You will go and buy a bottle of brandy - combine this with the synthetic carvite. Go back and talk to the alien again and he will drink the brandy and fall asleep. After you have taken his badge, leave the bar. Head south then go north through the small passage beneath the monorail. Walk on to the elevator and it will stop half-way down. Use your cable on the elevator to get down. Talk politely to tramp, asking for his help. Give him the blue flask and he will give you his ID card. Now climb back up the rope to the elevator. Use your droid on the elevator control at the top to get back up. Walk west and you will return to the arcway.

A healer will be mugged - you will walk over and interrupt. Talk to the healer, offering to get his hand back, and you will chase after the jet-packers. Keep shooting at them with your car, and ram them into the buildings as they pass you. You will eventually kill all but one, who will crash-land. Talk to him with options 1, 2, 1 and you will get the healer's hand. Walk east, north and east again, then talk with the healer. Follow him west and you will be attacked and chased by the Baron's droids.

When you arrive back at the elevator screen, quickly jump down on to it, then climb down the rope. Walk between the buildings to the east. Walk to the bridge and jump down to the monorail. On the next screen, jump to the pillar on the right and climb down. Walk left slightly and jump down to the track, then walk through the building and out to the door on the right. Use the droid on the duct to the left of the door and the door will open.

Use the ID card on the ordering terminal, selecting Mekanthallor Galaxy as the destination - you will be given a ticket. Use the door on the left, then the ticket on the terminal to get through the force field. Head east and use the keypad on the door to enter the ship.

Use the lift to get to level 1, then talk to the 2 guys with options 3, 1. Walk west and use the door console to enter your cabin. Watch the message, then use the communicator. Select "Level 3", then "Myrell". Exit your room and walk east, then use the lift to reach level 3. Once there, walk east, north, east twice, north, and east twice more. Use the door console, then talk to Myrell with 1, 1, 1 and exit the room again. An assassin will confront you - select 1, 2 and she will be knocked out. Pick up her key card, then head all the way back to the lift and go down to the Launch Bay.

Jump into the light blue car in the middle. Use the screen to "Navigate course", and set course for Ankarlon 5.

"Descend to planet", then "Select quadrant" and head to the northwest. Go west and push the junk on the left of the screen to get a straight metal bar. Combine the 2 parts of your starchart, then combine this with the straight metal bar. Go back east and jump in your car. Using the screen, "Ascend from planet", "Navigate course", and set a course for the Mekanthallor Galaxy, then Daarlor-Korv.

"Descend to planet", then "Select quadrant" and head to the northeast. Walk east twice. Insert your starchart into the recess in the shrine and you will sucked into a black hole.

Walk east and pick up the small rock. Look at the plaque to see a diagram with 6 stones marked. You need to quickly run around and stand on each of these stones, finishing with the furthest from the power gem, then throw your rock at the gem to dislodge it. Run and get the gem, then run back to the black hole (jumping over the gap) before the black demons catch you. Go west twice and jump into your car. Head back to your previous location, by selecting "Ascend from planet" and "Navigate course", and selecting Mekanthallor Galaxy, then Ankarlon 5.

"Descend to planet", then "Select quadrant" and head to the northwest again. Go west, then insert your metal bar into the terminal on the crawler. Use the power gem in the terminal, the use your computer arm on the terminal. Select the 2nd option, and you will meet the ship's pilot. Talk to it with 2, 3, 2 and you will receive a cloaking device before leaving.

Walk east and jump into your car. Head back to the Mekanthallor Galaxy and you will board a rebellion ship. Select dialog options 2, 1, 2, 1, then use the transporter pad to reach Coros.

Talk to the 2 smugglers, using options 2, 2, 3. Go north and talk to the man waiting by self, saying 2, 1. He will lead you to a droid room. After he leaves, go west and south, then talk to the sentinels (2, 1). Head back south and talk to the robot with dialog 1, 2 - when he comes back select option 2 and he will be destroyed. Go south. Pick up the batteries. Combine the power gem with the cloaking device, then with the batteries. Use the arm computer on the power gem to activate the cloaking device. Now walk west between the sentinels.

Baron Keelev will appear and shoot you, but this will backfire and you will steal his ID card. Use the arm computer on the power gem again and return east, south and west to the screen with 4 droids. Talk to the droid on the right, selecting options 2, 1, 1. It will blast a hole in the wall and you will go inside.

Now run east, up, east twice, up, east, south, east, north and east. Quickly throw the ID chip at the lizard's head, then jump on its tail and you will hide. Wait for the droid to get eaten, then pick up the batteries. Climb up and you will open a hatch to the outside. Combine the power gem with the batteries and use the arm computer on the power gem to use the cloaking device again. Now you can safely walk west without being shot. Push the droid facing away from you, then run northwest.