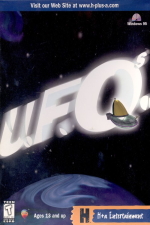 UFOs is a comedy 3rd person adventure game with several arcade elements. You play as Gnap, an alien who is stranded on Earth when his spaceship crashes. You must obtain the parts to repair your spaceship so you can continue your travels.

Take some mud from your spaceship, then try talking to the pigs. Head east and try to open the truck's door, but it is locked for now. Continue east and talk to the platypus, then free him from the trap and it will follow you around. Click on the platypus again, then pick up the patch of grass from the muddy bank. Now head north to return to the truck, then follow the path towards the small house (not the big barn in the background). Try to pat the dog, then talk to it. Pick up the branch from the tree trunk, then look through the window of the house - you can see the key but the old lady won't let you take it. Try opening the door, but again you are denied. In your inventory, combine the mud with the grass, then use this combination on the platypus, and you will end up with the key.

Return south and use the key on the truck - the gas tank is empty. Head north towards the barn and try to open the barn door, but it is locked. Use the haystack, but you refuse to search through it; instead get the platypus to search and he will find a needle. Use the needle to pick the lock and you will end up inside the barn. Try to get the gas can, but your remote control stops working. Climb the ladder and you will fall to the ground. Talk to the horse, then hit it with the branch and you will get the gas can. Go back outside and head west and south, then use the gas can on the truck and get inside.

You need to use the left and right arrows on your keyboard to change lanes while you are driving. Hit all the animals, aliens and people you can, and avoid hitting the rocks. Once the gauge along the bottom of the screen is filled, you will reach your next destination.

Pick up the fluffy dice from the hood of the crashed truck, then cross the street by heading northeast. Talk to the old man and the dog, but neither will listen to you. Try picking up the dog's toys, then try touching the dog. Use the platypus on the dog, then head west. Open the large bin on the right, then head inside through the door. Try to take the tongs from the left of the chef, then the box from the right. Put the platypus in the box and you will end up with the tongs. Now head northwest to find the bar.

Talk to both men here, then pick up the pool ball from the table and you will throw it at the skinny guy. Head east into the toilets. Turn on the tap then use the urinal. Look at the graffiti on the side of the toilet stall, then look in the toilet stall and you will see a coin. Use the tongs to get the coin, then return to the west.

A short cutscene will show that the guys at the bar don't like the current song playing from the jukebox; the jukebox requires 50 cents to operate and you only have a quarter. Head west and talk to the guy on the far left to see he has a gold tooth. Use the quarter on him, then combine the quarter with your fluffy dice. Use this combination on the jukebox, then on the coin slot and you will start a fight that ends up with you traveling again.

Cross the street towards the Toy Store, then try to take the cowboy hat from the left side of the roof. Look at the phone number in the window here, then head inside. Talk to the lady at the counter and look at the picture on the counter. Now keep trying to play with the toys in the store, and she will eventually kick you out. Return south to cross the street again and use your quarter in the telephone. Use the platypus on the phone and dial 555-6789. Go back into the Toy Store and take the picture from the counter, then leave the store.

Grab your quarter back from the phone, then head across the street to the opposite corner. Talk to the guy on the right and he offers you a joint - take it. Go into the store and head east, then take a packet of cereal and return left. Unfortunately security catches you and you lose the cereal.

Head south to return to the phone corner. Give the joint to the platypus and you will get a new wrench. Go over to the fire hydrant and use the wrench on the right side of it. Use the trash can on the water jet and you can take the cowboy hat. Head west and swap your cowboy hat for the grocery boy's hat on the ground. Continue west and use the grocery hat on the grandma so you can help her to her car. You will receive two tickets to the circus, and after she goes you can pick up the banana you dropped earlier.

Head southeast, northeast and east into Circus World. Give your tickets to the "man" at the booth and head into the tent. Go north towards the elephant and look at the machine next to him - elephant tranquilizers. Use your quarter to get a tranquilizer. Go south and you will see the elephant overdose. Now head to the elephant janitor behind the elephant. Pick up the bucket next to the trash can, then walk east to find a beer stall. Try to use the beer spigot, but you are not tall enough. Use the platypus on the sign to the left, then while the man is distracted, use your bucket on the beer spigot. Add the tranquilizer to the beer.

Return west and try to enter the passage. Show the picture of the clown to the janitor and you will be allowed through. Give the beer to the clown and take the first spaceship part that you need. Head out of this room and go west to see a performing monkey. Use the banana on him.

You just need to move left and right, and jump forward by pressing up. Catch the coins and notes falling from the sky and jump over the banana peels. Just take your time and you will eventually reach $19.95, enough for a box of cereal and the second spaceship part.

Head north towards the house and pull the axe out of the tree stump. Go inside and jump up to grab one of the bull's horns. Use the platypus on the trapdoor lid, then head down and east to see the jamboree.

Go to the second booth from the left and try to take the chicken from the barbecue on the right. Give your quarter to the guy here and he will give you an empty chicken bucket. Leave this booth and head east twice. Take the spring from the kid's head, then use the platypus on the girl behind the counter.

In this battle of tongues, you can attack by pressing right and defend by pressing left. You just need to be in a winning position when the time runs out, so if you have a good start to a round, just keep defending until the time is over. You need to win 2 rounds to be successful overall. When you win, you get a piece of gum.

Now head west three times to find the toy booth. Try to take the remote from the baby, but he starts crying. Put the gum on the flying saucer, then put the bucket on the baby's head, so you can take the remote. Fly east twice and pick up the large golden key, then fly west and you will drop it into a bucket of water. Keep flying the saucer around and you will eventually have to return it.

Head to the far east to find the dance floor. Use your spring on the ball, then climb up the rope and the final part of the spaceship will fall into place in your ship. Head west from here to return to the chicken booth to see that the box of hot sauce is now open. Continue west and put the bucket on the baby's head once more. Fly the saucer east and pick up some hot sauce, then continue east and drop it in the bucket of chicken the two-headed guy is eating.