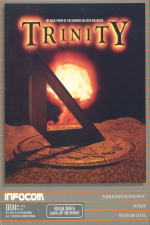 Trinity is a classic text adventure game by Infocom. You need to travel through space and time to change the course of history; in doing so you will hopefully affect the events of the Trinity Test and prevent a nuclear war.

Head southwest and north. Buy a bag of crumbs, then take the bag and change. Feed the birds and you will see a ruby. Try to pick it up, but it is stolen. Go north and push the perambulator east twice and south. Read the notice here, then open the perambulator and get inside. Open the umbrella. After the crash, get all, then go south and enter the water. Go east.

Head south 3 times, southwest, east, south, up, north, down, west, northeast and north 3 times. Set the ring to the sixth symbol, then turn the lever. Go south twice and drop all, then pick up the paper and umbrella. Walk east twice and enter the toadstool. Open the umbrella, then pick up the paper and umbrella again. Head east and get the spade, then go west and wait. Give the paper to the girl, then give her the umbrella. Sit on the bird and go through the door.

Head west twice, drop the spade, and get the splinter. Next go north twice. Set the ring to the fifth symbol, and go south twice, east, northwest and northeast. Open the front door of the cottage, go east, and open the back door. Read the book, then wait while the magpie gives you clues. Open the cage and take the cage. Go east and search the pile, then take the garlic. Enter the toadstool, then head down and northeast twice. Examine the fissure, get the lemming from the fissure, and put it in the cage, then immediately close the cage. Return southwest twice and up. Go through the door and head west, then put the garlic in the cauldron.

Go west, southwest, southeast and west. Drop the cage and pick up the axe. Go north twice and set the ring to the fourth symbol, then go south twice, east and northwest. Chop the tree with your axe, then push the tree north. Go north and enter the toadstool. Go down the stairs, open the box and press the red button. Now head south, northeast, northwest and west, then wait until the coconut floats out into the lagoon. Point at the coconut, then pick it up after the dolphin tosses it toward you. Walk southeast, north and up, then go through the door. Go south and east, then empty the hive twice - go west twice to get rid of the bee, then go east, northeast and east into the cottage. Hold you hand in the cauldron. Now drop the coconut and break it with your axe. Quickly pick it up and hold it over the cauldron.

Walk west, southwest, southeast and west. Drop the coconut and axe, then go north twice. Set the ring to the third symbol. Walk south twice, west twice and north twice. Show the splinter to the barrow wight, then go north. Search the bones and take the key. Enter the toadstool. Get the lantern, then go west and get the walkie-talkie. Continue west, then go east, turn on the lantern and drop it. Go west again and put the splinter in the crevice, then take the skink and put it in your pocket. Return east and get the lantern, then go east and head through the door. Go south and put the key in the hole, then turn the key. Go down and turn off the lantern.

Go east 3 times, then drop the lantern and walkie-talkie, and take the axe. Go north twice and set the ring to the second symbol. Head south twice and west 3 times. Throw the axe at the icicle, then get the icicle and the axe. Go east 3 times and north twice (so the icicle hardens again), then head south twice, east, northeast and east. Touch the lump with the icicle, then take the lump. Walk west 3 times and northwest, then enter the dish. Wait until you drift to the ground in the soap bubble, then head south and southwest. Enter the toadstool. Examine the moon, then take the skink and kill it. Wait until you are very close to the white door, then break the bubble with the axe. Head east, northeast twice and east again, then put the skink in the cauldron. Immediately go west, wait, and return east. Look in the cauldron and take the emerald.

Head west, southwest, southeast and west. Drop the axe and emerald, and take the spade, then head north twice. Set the ring to the seventh symbol. Head south twice, west twice and north. Lift the slab with the spade. Now drop the spade and look in the crypt. Examine the corpse, then take the shroud and wear it. Take the boots and wear them both. Also take the bandage and wear it. Look in the mouth and get the coin.

Go south and east twice. Examine the green boot, then get the emerald and place it in the green recess. Get the cage, walkie-talkie, bag and lantern, then go southeast and wait for the dory to land. Enter the dory and give the coin to the oarsman. Go south straight away, and enter the toadstool. Examine the box, then examine the panel. Open the book and examine the cardboard, then read the poetry. Now wait until you hear the motor fade into the distance. Head west and down twice, then drop the cage. Get the ruby and place it in the red recess. Take the cage again and head northwest 3 times. Open the jeep and enter it, then examine the radio and the dial. Set the slider to the number indicated on the dial. Extend the antenna, then turn on the radio and the walkie-talkie. Exit the jeep.

Go southeast 5 times, east, south and west. Open the right door, then go west and north and close the door, with the snake waiting outside the closet! Drop the cage, turn on your lantern, open the cage, and turn the lantern off again. Now open the door, and the snake will eat the lemming. Go south and take the paper, then take the screwdriver. Go south and west, and take the knife. Now head east, north, east twice, south and east (you should be south of the reservoir).

Drop all except your bag. Go up and drop the bag, then climb down again (this prevents the roadrunner from eating the crumbs). Head northeast and up, and try to take the binoculars, but you will fall in the water. Go south and down, then get the lantern and go up, north, and down. Turn the lantern on and get the binoculars. Go up and south, and get the bag. Turn the lantern off and drop it. Go down and get all, then go west 4 times and south twice.

Examine the shelter through your binoculars. Wait until the roadrunner appears, then point at the key, and take it. Go north 4 times and unlock the box, then examine the panel. Turn the breaker, and carefully note which wire/line Able suggests checking. Turn the breaker again. Head southwest 4 times, then give the bag to the dog, and wait until the roadrunner starts pecking at the crumbs. Now go north, east, northeast twice, up twice and east. Get the cardboard, then read the cardboard and read the diagram. This indicates the color of the wire you need to cut shortly (red, blue, striped or white - depending on which wire was indicated by Able earlier - ground, information, detonator or positive). Unscrew the panel and pull the chain, then look in the panel. Now wait until the countdown reaches eleven seconds, then cut the appropriate wire with your knife.

Back at the palace gates, go east and north twice, then wait for the game to end.