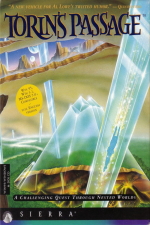 Torin's Passage is a fantasy adventure game by Sierra On-Line. You play as Torin, a young boy living with his parents on the planet of Strata; you return home one day to find your parents have been imprisoned by the evil sorceress Lycentia. You must set off on a journey with the aid of your shape-shifting cat Boogle to confront Lycentia and save your parents.

Take some berries, then walk towards the house and take the axe and rope before heading inside. Look in the basket and pick up the worm. Look at the small table next to the far chair and take the empty pouch. Leave the house and return down then go right. Approach the building near the cliff. Read the sign next to the door, then use your axe on the nearby crystal. Knock on the door to get inside, then talk to Herman and give him the berries.

Leave the house and return down and then left. Just before you reach the large tree in the water, go up along the path. Climb the tree, then use the rope on yourself and on the branch. Jump off, then start swinging by clicking near the right branch. When you are swinging really high, grab the branch. Walk down, then climb up on to the large tree in the water. Click on the snails on the small large and talk to them 4 times. Climb back down and walk left, then go up between the two spiky vines. Use your worm on the top right leaf. Go back and right and climb the large tree again. Look at the snails and give them your leaf. Now climb back down, go left and walk down when near the berries.

Approach the castle and put the snails on the leaf in the moat. Leave the castle and return down along the path. Go to the right and use your scum on the tree with the slugs at the base. Use Boogle's box over the moat scum. Walk just to the right and you will end up getting the slugs. Return right and into Herman's house. Give him the slugs. Leave the house and go down then just to the left. Use your axe on the square-shaped root of the nearest tree. Go back to Herman and give him the root, then take any of the crystals he offers.

Walk up the stairs and take the second green tile. Now go back up the stairs, then down to the left and through the door to meet the Bitternuts. Talk to Mrs Bitternuts 5 times, then exit and go down and through the archway to appear on the bridge. Walk right to meet the King and talk to him until the Queen gives you a locket. Open this in your inventory, then look at the crystals in the ceiling to notice they are incomplete. Use your blue crystal in the missing space to receive a ball invitation. Take the meat from the table. Leave here and return across the bridge. Go and visit the Bitternuts again, and give the invitation to Mrs Bitternuts, then take the green tile before leaving again.

Jump over the gap and climb down. Take the carpet, pillow, fan, sign and green tile. Climb back up and jump across the gap again. Go up to the washer woman and use the sign on her. Take the clothespin from the washing line. Go back to the gap and jump across again, then enter the cave to the right. Use the clothespin on your nose, then the carpet on the skunks. Go through the other end of the cave. Talk to the man on the ledge until he says he is uncomfortable, then give him your pillow. Go back away from the ledge, then climb down to where you originally got the carpet. Scroll down so you can drop the carpet to the ledge below. Use the fan on the carpet to get rid of the girls.

Walk over to the ladder and use Boogle's yo-yo on it. Get him to take the green tile, then go through the opening. Now climb back up, jump over the gap and go back to the nest. Scroll down so you can use the dragon poo on the tree, then climb down the tree. Go up the stairs and put your 8 tiles on the wall, then leave again. Climb up the tree and go all the way back to see the King. Take the tile from the floor here. Go back down the tree and up the stairs and put the 9th tile in the wall. Now rearrange and rotate the tiles to show a face (not smiling). Use your pouch on the phenocryst.

Walk any direction and you will fall. Quickly click on the Pergolans and you will be freed. Walk right and talk to Leenah a few times, then give her the locket. Take the knife from her boot and use it to free her.

You now need to arrange the 10 Ostiaries so there are groups of 4 with similar features along each line of the star. The four features that are important are: purple robes, red sashes, yellow scarves, blue sleeves and green hoods. For the next stage you need to rearrange the Ostiaries so all the females (shorter) are on the left and the males on the right. From left to right, they should be:

Now pick up the baton and use it on the females then on the males.

Open the cupboard and take the bottle. Open the bottle in your inventory, then use it on the top of the cupboard. Press the middle left button on here, then exit the cave. Look at the ground just to your right and look at the symbol, then back out and walk right to the hut. Click on the balance beam to sit in the right side, then get out again. Return left and continue left to a larger structure.

Click on the gray box, then step just to the right and you will get a cannonball. Repeat this 4 more times to get 5 cannonballs in total. Go back to the right, then to the hut. Put 4 cannonballs in the left side of the balance beam, then jump in the right side again and it will be level. Get out and go back to where you looked at the ground - there will now be a catapult there. Use the lever on the side, then climb in and cut the rope with your knife. Walk right to the end of the pathway and pick up the wrench. Now return to where you started and continue left. Make your way along the path all the way to the right. When you reach the silver machine click on it, then use the wrench on the nut. In the next area, keep following the paths until you reach the far lower left.

Enter the cavern on the right then look at the crystals. Swap the positions of the crystals to direct the beam of light through each position and head out the right side. Use your pouch on the phenocryst.

Use Boogle's nurse hat on yourself. Climb the boxes, then use your knife on the grate. Crawl left 3 times, then click to remove the menu and you will fall down. Talk to Mrs Plant (the sunflower) several times, then look at the silkworms on the ground in front of her. Take one of the red flowers from the left, then walk left. Talk to the Sappy Tree several times, then use your flower to get a sap tear. Return left and look at the silkworms again. Put some sap on each of the leaves, then pick up all 4 silkworms. Talk to Mrs Plant again to learn about the silkworms. Go left again to return to the tree.

Click on the grass to the right. Now you must make your way across - move your mouse around until you get a positive response, then click to move there. Continue this until you reach the far right. Go through the door, then pick up the cane and hat. Talk to the rabbit, then take the bow and give him the hat. Take the poster from the wall over on the right, then talk to the magician several times. Give him the rabbit in the hat. Walk to the far right to cycle around the room, then look at the acrobats and take the bagpipes from the shelves behind the magician.

Talk to the musician several times until you receive an audcryst and a crystcorder. In your inventory, put the audcryst in the top slot of the crystcorder and press play. Now walk left and talk to the carpenter several times, then walk to the far left or right to cycle and take the carpenter's saw. Talk to the stage manager several times until she says she wants you onstage with your saw and bow. Use your saw on your cane and give the magic wand you have created to the magician. Next use your silkworms on your poster and give the silk kerchief to the magician.

Walk to the far right to cycle around the room, then pick up the resin from the floor where the acrobats were previously. Use the resin on your bow. Walk behind the red curtain (via the right side) and use the saw on yourself.

Open your crystcorder and move the fragments of the audcryst around in the top slot until you have it saying "dreep, come here". Leave this playing on repeat and drop it in the null void. Now use the bagpipes on yourself and blow yourself down, right and backward until you are near the doorway.