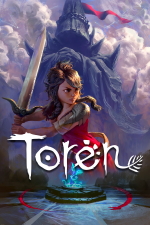 Toren is a fantasy 3rd person action adventure game with some platforming elements. There are 12 Steam Achievements, all documented in the walkthrough below. They can be obtained on a single play through, or you can jump to specific chapters in the game from the main menu after completing the game once; they don't tend to unlock until you exit the game.

Run along the starting platform to attack the dragon, and you will be turned into a statue. As an infant, crawl left, then walk forwards following the bird. Try to catch the bird and it will fly away. Now as a girl, examine the statue. Plant the tree on the slightly raised platform, then head outside.

Turn around and go past the top of the ladder you climbed earlier. Continue up a set of wooden steps to find the inside of a hollow tower (you will see a place to attach a spyglass just before entering the tower).

Turn to your left on entering the tower and pray at the shrine to start your next dream sequence.

Walk around the edge of the symbol on the ground, covering it with salt. Now follow the long path down and make your way forwards, avoiding all of the enemies. Keep going until you find a pool you can fall into. Underwater, keep following the path, falling down to deeper platforms as you go, and you will eventually reach an underwater flame, which you can use to end the dream.

Turn around and go down the spiral stairs to the base of the tower, then immediately turn right and climb up to a small ledge. Grab the chainmail and pull it free Little Warrior. Go back up to the ledge again and pick up the spyglass, then return up the spiral stairs and go outside again, putting the spyglass on its stand. Look through the spyglass and explore the entire scene until the dragon spots you. Go back inside.

Head down the spiral staircase again. Pick up the scroll from the ground. Now run around to the other side of the cover in the ground here and slide it open. Jump on the 2 vines holding it in place and it will fall over, revealing a massive tree and a sword.

Head out through the low triangular opening to the outside. Go just to the right and push a barrel so that it falls down. Go back inside and find two nearby large logs to push towards the outside. Go outside again and now you can jump up on to these logs to reach a new area. Now you must hide behind pillars and statues while the dragon is breathing in your direction, gradually making your way to the right. If you die, you will just start this sequence again and obtain an achievement Reincarnation (you get this the first time you die, except within dream sequences). Once you reach the shrine you will start the next dream sequence.

Walk around the edge of the octagon and cover it with salt. Run along the platform dodging the creatures to reach another shape, then cover this with salt as well. Keep going along a series of floating islands and a long passage until you see the dragon again. Wait until there is a long pause between breathing, then run to the far right and the dragon will leave. Continue along the pathway and grab the sword at the end.

Walk forward and inside, across another branch of the tree, until you stumble and are turned into a statue by the dragon.

You will automatically stand up near the base of the tree again Rise and Shine Little One. Pick up the fallen sword next to you Little Knight. Run up the stairs and outside towards the dragon. Turn left and run back past the deer, then climb down the tall ladder you ascended back in Chapter 1. Go through the doorway at the bottom and interact with the throne to get the helmet Little Monk. Return outside, go back up the tall ladder, and continue past where you came outside towards the dragon. Continue forward over a gap and along a stone path until you meet the dragon again.

Walk around the edge of the shape and cover it with salt. Now head to the far left to find a stag. Lure it towards the sword altar to the far right, and when it reaches the blood at the base of the altar you will draw your sword. Kill the stag, then head around behind the altar. Throughout this section, wait for the gusts of wind to pass before making any major moves. Jump right, then forward, right and forward again. Continue forward up to a higher level. Run along this passage, then jump up to the right. Follow this path and you will eventually reach some stairs to climb.

After you wake up again You are growing so quickly, turn around and make your way back down around the edge of the tower, until you reach the deer near the top of the tall ladder. Kill the deer Dark Knight. Now go back up to where you started this chapter.

Jump forward over the broken path and head inside, walking along a tree branch and jumping to a level above. Jump across towards the large shaking doors, then head up the spiral staircase to the left. Run up here, jumping across 2 gaps. When you reach the next gap, jump instead to the chandelier swinging in the middle, then from there to the opposite ledge. Go outside and kill a group of enemies, then use your sword on the mechanism straight ahead to release some chains and open those large doors. Go back inside and down the spiral staircase, then out through the doors.

Make your way up towards the dragon, hiding behind the statues as you approach. When you get close enough, attack the dragon and kill it A True Warrior.

Run down the slope following the water, heading back towards the tower, then head up around the right side. Jump over some platforms to the right and hide behind a nearby statue. Quickly run to the next statue to the right, then jump to the far left behind some buildings and follow the path here. Hide behind a statue on the other side, then quickly run to the next statue to the left and hide there as well. Now quickly run to the nearby fallen tree and cross over. Turn right and follow the path, jumping across the gap. Pray at the shrine here to start your next dream sequence.

Turn right and double-jump to make it over a gap, then turn left and enter the tower again, where you will start another dream.

Walk around the spiral shape, covering it with salt. Now you must navigate a maze by waiting for lightning flashes to guide your way. There are 3 triangle shapes to cover with salt, scattered throughout the maze; if you want an overview, hold down your "Look" key and wait for a lightning flash to see the entire maze. Once you have covered the 3 triangles, go straight forward from your starting position and cover a straight line symbol with salt. Continue straight ahead, avoiding the enemies, and go down the spiral staircase to the bottom.

On the next level, light your contract using the swinging sconce, then run around the outside of the tower and back in so you can light it from the other side of the same swinging sconce. Now run up the stairs to the left and jump over the gap, then jump to the chandelier again. After you rise again, jump off the chandelier and light your contract from one of the fires, then use it to light 2 more fires on this level, before heading to the outside. Quickly run around the stairs upwards and rush to jump back to the chandelier as it ascends.

Run along the path, then jump into the darkness Into the void.

If you have completed all of the dream sequences you will get another achievement now Enlightenment.

Walk to the dragon and pull out your sword, then your final battle will begin, where you will be assisted by Solidor. You need to advance towards the dragon slowly, by first using Solidor as a shield, then by protecting him with your sword. Alternate between these two, then attack the dragon and a nearby column will fall, pushing the dragon back.

In the second round, continue to help Solidor to move forward, but this time you must also pull a block into position to create a complete path. Once you can attack, Solidor will charge with his shield; instead of attacking the dragon again, hit the column to the left, which will again fall and push the dragon back further. The third round plays out the same as the second, and at the conclusion, you must jump on to Solidor's shield, then strike the dragon a final time.

After beating the dragon, simply walk up the stairs to the conclusion. Watch the credits through to their completion to get the final achievement Save Humanity.