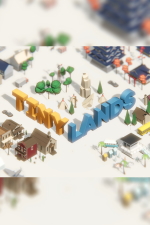 Tiny Lands is a simple puzzle game where you must closely examine 2 similar small scenes and find the differences between them. To find these differences you will need to rotate the scenes and possibly zoom in for more details. There are 13 Steam Achievements, all documented in the walkthrough below.

The objective in this world and all subsequent worlds is to identify 5 differences between the left and right scenes. You can click on the object in question in either scene, and you click on them in any order. The descriptions below detail the type of object followed by its description in the left scene, and the difference in its appearance in the right scene.

This special level contains 10 differences, and there is a specific achievement for finding them all 1st Anniversary Special!:

You will probably get most of the achievements just by playing the game, but here are the necessary steps to collect any you may have missed: