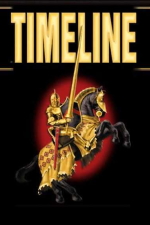 Timeline is a game based on the book of the same name by Michael Crichton. You play as graduate student Chris Hughes, sent back in time to track down your missing professor and his team, who have failed to return from 14th century France. The game has adventure elements interspersed with many action-based sequences.

Go through the motions of this tutorial, then go and pick up your stun staff and head through the door. Push the buttons when prompted, then wait while you are scanned and analyzed. Go through into the time travel cave. Press the numbers 5, 7 and 9, then press the load button to start a 2 minute countdown. Now run around the platforms and down to your pod, where you must push the button out the front before getting inside.

After the travel, walk carefully along the path until Baretto is killed. You must slide down several sections of the path, being careful to dodge the rocks and make it safely over a jump. When the path forks, listen out for which way Kate tells you to veer, it can be either left or right. Walk over the tree trunk and up some stairs, then continue sliding and make a final jump before you can walk down to Castelgard.

Proceed forward, then Kate will run off to try to open a door, and leave you to take care of the approaching guards. Pick up a barrel and throw it to knock out the guard. Repeat this until Kate says she has the door open, then follow her inside. Climb down the ladder and go out through the back door, then turn left and follow the street (note the Inn on the way) to reach a gate. You will see Oliver being taken past. Return to where you saw the Inn, but the Innkeeper requests gold to let you inside. Go to the man just left of the Inn, who challenges you to shoot arrows at all the targets within 15 seconds - do this and you will be given gold. Now go to the Innkeeper and he will let you inside.

Go through the first door and see the men fighting. Avoid them and take the narrow passage to the left, then steal the sword from the kitchen. Follow the back passage to find a man willing to train you using the dummy, then continue past a drunken man to return to the first room. The 2 fighting men should have left, so head up the stairs and into the first room on your right. Climb out to the balcony and walk along to enter the furthest window (if you fall, you can climb up again using the ladder). Grab the tunic from the wall, then run out the window again. Climb back in the first window and go down the stairs. At this point you will be mistaken for the knight who owns the tunic, and escorted to the tournament.

Win the jousting tournament by repeating hitting your opponents in the breastplate.

After the tournament, walk quickly through before the portcullis closes and traps you. Head right to the crane and turn the crank to raise the platform. Now go through the doorway after the guard who took your sword and attack him with your stun staff. Climb the stairs and go through the unlocked door, then use the lever to lower a drawbridge. Go across and around the castle wall until you can climb into the platform you raised earlier. You will automatically head across the courtyard and can go through another doorway.

Kate will point out that you don't want to get caught in here. Look through the small window in the door to see when the guards have turned away from you, then open the door and jump left to the ledge. Run along the ledge, then wait until the guards are walking away again before jumping out and going through the opposite door. After Kate joins you, enter the next area and duck into the alcove to the left. Carefully emerge after a few seconds and follow the guards until you see the Professor being accompanied out of a doorway ahead. Immediately run back to the alcove. After the next scene, proceed carefully, taking out another guard with your stun staff, and Kate will eventually run off ahead of you. Go forward some more and look at the tapestries - there is a secret passage behind one on the left, so walk into it. Watch a conversation through the first window, then keep going to meet up with Kate and the professor.

On your horse, make you way as quickly and safely as you can, ducking and jumping as necessary to make it through the gate before the 12th bell sounds.

Jump into the water and swim through the waterwheel to enter the mill. Jump over the cogs and climb up the ladder to reach Kate, then pick up the sword and continue. Climb down the ladder on the left and stun the 2 guards, then jump over another set of cogs, go up the stairs and stun another guard. Go through the doorway, then immediately turn left and go down a secret passage. Jump over the narrow wooden platforms to reach a new area.

Pick up the bow and arrows. Get on to the conveyor belt and duck beneath the hammers, then climb up the ladder at the end. Shoot the single guard with your bow, then run across the passage and along another conveyor belt. You cannot use the ladder in the next room to climb up to the balcony. Instead, turn around and jump on to an upward-going coal container, then jump off to reach the higher level. Go across the high conveyor and shoot the guards (or wait for Kate to take care of them), then jump over to the balcony. Go through the wooden door on the right, and you will find Marcellus has been killed. Look at the broken mirror on the wall to open the other door, then run outside and go left to the time machine.

Jump on the 5, 7 and 9 buttons, then the unload button. Next jump on the load button and quickly get into the cannister so you are carried to the time pod area. Go straight ahead then turn left and enter the blue area before the time runs out.

Cross the bridge and go around to the right to see a tree that acts like a see-saw. Have the high end towards the open window, then run up the tree and jump inside. Climb the stairs in the middle of the chapel and pull the lever to activate a large stone wheel and awaken the knight. Run down beneath the stairs so the knight cannot reach you, then when the wheel approaches one of the crosses on the ground, go out and crouch on it. Do this at the other 2 crosses and the secret passage will be opened. Go and join Kate and follow the passage.

In the boat, just follow the caves and avoid any obstacles, particularly the sink holes where you will drown.

Go to the base of the stairs and light the candle. The shadow indicates the rock to press, half way up the stairs. Press this, then open the door and go through. Climb some more stairs and you will see where Kate and the Professor are being held. Drop gradually down to the floor using the ledges, and take out the guard. Free Kate from her shackles, then you must free the professor. Try to use the machine near him, but you need the crank. Climb up 2 ladders, then turn right and go beneath some rocks, then climb up to get the crank. Go back down and use this on the machine. When the Professor reaches the same level as you, try to open the gate, and Kate will pick the lock to free him. Subdue the next guard that appears, then climb the ladders to reach Kate again. Defeat another guard and go through the door. You will reach a burning room - kill Lord Olive. Climb up the broken beam, then make your way across the room and out the window.

Jump across to where you see Kate and climb the stairs to meet Decker, the last man you must defeat. Use the winch several times to lower the drawbridge, then run across and up into your pod in the time machine.