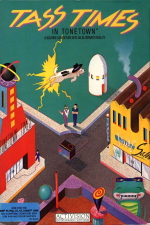 Tass Times in Tonetown is a text adventure with graphical elements. Your grandfather has developed a device which turns his imagination into an alternate reality. After one of the creatures he has imagined kidnaps him, you must travel to Tonetown to rescue him.

Start by going south and taking the key. Return north and go west, then unlock the door. Take the book and the guitar picks, then head east. Drop your key, flip the switch and enter the hoop.

Go north along the trench. Search the trench and take the silver jar. Return south and go east twice to find the salon. Look at the dyeorama, then buy feather foil. Continue east into the boutique. Buy a jumpsuit and hooplet and wear them both.

Head west twice and south twice into the newspaper editor's office. Talk to Nuyu and you will get a job. Take the camera. Head east into Ennio's office, and turn on the printer, then turn on the terminal. Type your name (anything will do), then "YES". Take the press pass.

Head west and north out of the building. Drop your jar here for now. Go north 4 times. Talk to Stelgad, then show your press pass to her. Take a photo, then talk to the Daglets and take a zagtone. Drop your camera and pass here. After you are escorted back outside, head south 5 times and give the photo to Nuyu.

Go north, take your jar again, and go north twice then east. Get the mitts and wear them, then head west, north and east. Take a black mask and wear it.

From the party supplies store, go west, north and east. Now go north 6 times through the wetlands to reach a cliff. Open your jar and get a devil inside it. Return south 6 times.

Go west twice. If Ennio says " I smell Snarlmeat", then go east, wait, and return west. Once he no longer makes this comment, go down the well. Head west twice (Philbert won't eat you if you are wearing the mask), north 3 times, and up the ladder. Walk north and east, and unlock the gate. Return west and south and enter the tree. Go south 3 times and east. As long as Ennio doesn't sense Snarl, continue east and up. Drop your mask here.

Go east, south and west to Snarl's Pet Shop. If Snarl isn't here, wait until he arrives. Buy a pet (named Blobo), then go east, north, west, north and west. Pick up the card that Blobo digs up.

Go west and north and get a mushroom. Return south and go west to the gate. Throw your mushroom at the eye, then open the gate and go west 3 times, then north into the lab. Sic Ennio on Snarl. Give the book to Gramps. Talk to Snarl, then open your jar and push Snarl through the hoop.