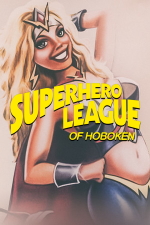 Superhero League of Hoboken is a comedy adventure/RPG hybrid from Legend Entertainment. You control an evolving group of superheroes with dubious powers, completing missions given to you by Commissioner and gradually uncovering an overarching threat.

The first thing you should do is get everything out of the closet. Head downstairs and take the painting, and the tape out of the compartment in the back of the Sinatra statue. Next go into the Lunch Room and assemble your team. It doesn't really matter who you take with you, because you only need specific heroes for single tasks throughout the game. Their most important role is to help you fight the mutants. Now go upstairs and get your missions from the computer. Also check out the maps on the wall and the chatterbox.

The rest of this walkthrough will be divided into the actions needed to complete each set of missions, as provided by Matilda. I've included the places where I found all items, but these may change from game to game - just make sure you buy or pick up everything you possibly can. After each set of missions, check the storage closet, get a new hero and check Matilda and the chatterbox for more info. The following are the abbreviations used below: