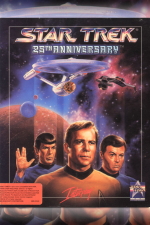 Star Trek: 25th Anniversary is the first of a pair of adventure games by Interplay, set in the Star Trek universe. It combines traditional 3rd person adventuring, side-scrolling segments, and first-person starship combat. You end up using the skills of multiple different crew members to complete a series of 7 episodes, with an overarching narrative. The series continues with Star Trek: Judgment Rites.

Play the simulation, then go to the Navigation screen (press N) and select Pollux IV. When you get there, orbit the planet (press O) then beam down (press K, second option).

Talk to the man waiting for you, then enter the bottom building. Use McCoy on the injured man and you will learn about some berries to help him heal. Leave the building and head north. Quickly use your phaser (set to stun) to shoot the 3 Klingons, then pick up the hand of the one nearest you. Continue north and get some berries, then return south twice and enter the bottom building. Use your berries on the man on the left, then leave this building and enter the top building. Use your berries on the man again, then use them on the machine on the right. While you are here, use the severed hand on the workbench. Look at the glass case, then use it and have the man tell you about each item. Get the skull and twisted piece of metal from it. Use the computer terminal, then leave. Go back to the bottom building and use the medicine on the injured man.

Leave the building and go north 3 times to enter the cave. Use your phaser (set to kill) to destroy the rocks from the top down. Use McCoy on the injured man, then talk to him. Use the severed hand on the panel to the right of the doorway. Walk north through the door, then use the panel between the yellow, red and blue symbols. Set each of the sliders to just below the midline, so one light of each color is active. Back out of the panel and use the twisted piece of metal on the green creature.

Go to the Navigation screen and select Beta Myamid. When you get there, win the battle, then orbit the planet. Hail the ship (press H), then use your computer (press C) and search for "Masada". Now talk to Spock (press T). Make sure your shields are lowered (press S), then hail the ship again and select the option to send the prefix code "293391-197736-3829". Now beam over to the ship.

Use McCoy on the injured man, then pick up the transmogrifier from the compartment next to him. Head east and pick up the items at the bottom right corner. Use your phaser on the welder in your inventory. Use the welder on the scraps of metal, then use the comb bit on the transmogrifier to repair it. Walk down the corridor to the right and quickly use your phaser (set to stun) to shoot the 2 guards. Use Spock on the exposed wires, then get the wires. Use the panel above them and then get the bomb on the door frame.

Go to the Navigation screen and select ARK7. When you get there, win the battle, then hail the station. Lower your shields, then beam over to the station.

Go east through the red door. Open the freezer unit and take the virus culture from inside. Go north through the large double doors and pick up the wrench from the floor. Use the red panel on the right wall to open it, then use the wrench on the wall vent next to it. Use the wrench on the panel beneath the machine on the far left, and pick up some insulation from the floor. Return to the south and use your insulation on the distillator machine to get some polyberylcarbonate.

Now head through the top door on the west wall. Open the cabinet on the left and get the antigrav unit. Next use your wrench on the top of the gas cylinders to turn on the gas supply. Use the synthesizer machine, then pick up the bottle of pure water. Use your polyberylcarbonate where you got the water, then use the synthesizer machine again. Pick up the TLTDH gas. Return to the east.

Use your bottle of ammonia on the nozzle of the machine on the back wall, then use your virus sample just to the right of this. Now use McCoy on the machine, then take the cure sample. Return through the top door to the west and use the cure sample on the synthesizer, then use the synthesizer. Get the hypo syringe and use it on Spock. Head east and north again and use the TLTDH gas on the vent on the right wall. Head south and use the ladder to climb down. Use your hypo syringe on the Romulans, then use the water on them. Go north through the doors. Use the humans on the left to untie them, then use your hypo on the Romulan and talk to him.

Go to the Navigation screen and select Harlequin. When you get there, win the battle, then select Navigation again and go to Harrapa. Lower your shields, then beam over to the ship.

Pick up a lens, degrimer and dodecagon. Use the lens on the degrimer, then head north. In the weapons room, use Spock on the blue triangles on the left panel, then use him again on the purple triangle. Now go through the right door to the north. From this sick bay, head north again. Use the control console, then pick up the repair tool from the triangular hollow beneath the right side of the console. Now walk southwest to find a database room. Use Spock on the central sphere, then use your tricorder on it, and use Spock on it again. Use your small dodecagon on the sphere.

Return north and use the control console, selecting each option. Use Spock on the console, and again select each option. Head southeast, then use Spock on Mudd. Get the small green vial from the middle of the machine in this room, and use it on the control panel beneath where you found it. Now use McCoy on Mudd. Go north and then southwest to find Mudd at the database - choose option 1. Head east then south twice. Use your lens and degrimer combination on McCoy, then use Spock on the columns, claw in the ceiling, and Sav-a-Ship machine on the left.

Go to the Navigation screen and select Digifal. Talk to the Klingon, then orbit the planet. Talk to Spock, then beam down to the planet.

Talk to the man here (Quetzecoatl) and you will end up in a pit. Get some rocks from the pile, and use these on the snake's hole, then pick up the snake. Use your rocks on the high vine twice to knock it right down, then climb up the pair of vines to the surface and head west. Continue west and try to talk to Tlaoxac. Use the snake on him, then use your rocks on him twice to knock him out. Pick up his knife, then continue west and north. Use your knife on the bright green plant near the water's edge, then throw the plant in the water to get rid of the creature. Walk over the log to continue west. Use your knife on the red dilithium crystal. Go west again to see Quetzecoatl and you will beam back to the Enterprise.

Be as nice as possible to the Klingons when talking to them to avoid a fight, and you will end up at a trial. Use the platform to talk to Vlict, and choose to intervene on Quetzecoatl's behalf to get a warrior's trial.

Use your tricorder on the electric life form. Use your phaser (set to kill) on the iron floor on the right. Pick up a wooden beam and use it in the molten iron. Now use the beam on the life form to disable it. Use your tricorder on the door panel, then use your communicator and ask Uhura to transmit the extra code as well. Next use Spock on the door panel.

In the next room, pick up 3 large green gems and use them on the stand on the left. Walk into the light on the right, then select option 3 to save Vlict.

Go to the Navigation screen and select Alpha Proxima, then orbit the planet. Use your computer to search for Scythe, Lucrs, Sofs, Base 3 and Base 4. Beam down to the planet.

Pick up a rock from the ground, then use your tricorder on the ground. Walk towards the big door. Use Spock on the panel and enter code 10200. Walk inside and use Spock on the computer panel on the left. Use him on the next door, then on the panel to its right, entering code 122. Walk through the door. Use your tricorder on the door panel here, then head east.

Don't send the information packet yet; you will automatically beam over to the ship. Use Spock on the main computer and on the captain's log. Walk south and use McCoy on the woman. Talk to her, then use your communicator to beam back to the Enterprise. Win the next fight to complete the game.