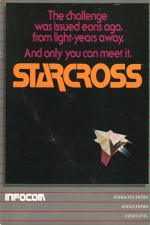 Starcross is a classic text adventure game by Infocom. You are the pilot of a spaceship designed to harness the power of black holes. Your fates change as your ship detects the presence of an alien spaceship.

Get the tape library, then stand up and go east to the bridge. Press the red button to turn off the alarm, then sit down in the control couch and fasten the belt. Read the screen and note the name of the mass that is displayed. Look up the appropriate values in your game manual, then type "Computer, range is a, theta is b, phi is c" (substituting appropriate values), and then "Computer, confirm new program". Now just wait until you are docked at the alien ship.

Unfasten the belt, stand up, and go east into the storage room. Get the suit and wear it, then get the line and return west to the bridge. Open the inner door, go out, close the inner door, open the outer door, and go out (you will get very used to this procedure).

Examine the sculpture, then press the fourth bump. Press the tiny column, and take the black rod. Now go inside (then close outer, open inner, go inside) to the red hall. Head north, west, north and east. There is a red rod in the ant nest here - throw the tape library at it, then take the rod and the tape library. Next go west, south, west and south.

Head west to the yellow hall, then open the door and go out. Get the basket and put the black rod in it, then open the outer door twice and go out again. Tie the line to your suit, then to the hook. Go west and get the pink rod, then put it in the basket. Return east and untie the line, then go in (close outer, open inner, go in again).

Go south twice and east to the Laboratory. Take the red and blue disks, then put the red disk on the floor and the blue one beneath the globe. Turn the dial to 4, then turn it to 1. Now pick up both disks, the basket, and the blue rod, and insert the blue rod into the basket.

Next go west, north 4 times, west and south. Open the panel on the computer and insert the metal square into the slot. Turn on the computer, then get the gold rod and put it in the basket. Now walk around the ship until you spot a mechanical mouse. As soon as it arrives, drop the red disk and it will collect it. Now follow the mouse until it disappears through a hole in the wall. Wait here until it comes back and leaves again, then wait a bit longer to make sure it doesn't return. When it has definitely gone, drop the blue disk on the floor and step on it to teleport to the garage. Get the red disk, then empty the trash bin until you can take the green rod and put it in your basket. Head north to leave the garage. Make your way back to where you dropped the blue disk and pick it up (if it is not there, wander around until you find the mouse and take it).

Go to the blue hall and head all the way to the north. Go south and west into the Observatory. Drop the red disk here, then walk east, south, east twice, south, and east twice into the middle of a village. Wait here and the chief will arrive and point at your suit. Remove the space suit and give it to the chief. Point at the brown rod and he will give it to you. Now follow the chief until you reach the middle of the warren. Climb down the ladder (then close inner, open inner, go out). Now head west twice. Pick up the visor fragment, then head north into the Control Room. Move the skeleton and pick up the violet rod, then put it in the basket. Drop the blue disk and step on it to teleport back to the Observatory.