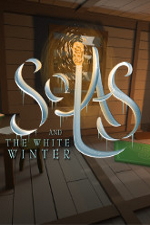 Solas and the White Winter

Solas and the White Winter is a fantasy open-world adventure game. You play as Solas, a young Celtic girl who must survive the harsh unrelenting winter and unlock a series of temples to explore the history of her family's hardships. You can light fires along your path to act as save points. There are 6 Steam Achievements, all documented in the walkthrough below. There are several action/puzzle sections where you can die, and one of the achievements requires that you complete the game without dying.

Warm your hands at the fire, then head outside. Follow the trail of blue spirits through the snowy landscape and around to the left, until you reach the first temple (with the blue light shining up into the sky). Use your torch to light the fires on either side of the doorway, then head inside.

In the first chamber there are four more flames to light, and each has a number of circles on the rock above it to indicate the correct order (start with 1, then 2, 3 and 4). If you make a mistake, pull the lever to extinguish all of the flames and start again. Head through the doorway into the next chamber after the door opens.

In the next room, there is a stone with four symbols from top to bottom: summer, autumn, winter and spring. You need to light four flames in this chamber that are indicated by these seasons. The first is just to the left and displays a sun symbol. The second has some orange and green near the base of the stone. The third is near the sun, and has snow at its base. The fourth is near the autumn one, and has flowers blooming nearby. After you are successful, the light will be transferred from this temple to a magical stone outside the final temple The First Step.

Warm your hands at the fire again, then head outside. Start going in the same direction (to the right), but now you can leave the path and go between some large icicles to the right to find a new area.

When you reach the frozen lakes, make sure you walk rather than run, or you will fall through the ice and die. Cross over multiple lakes as you make your way gradually towards the next temple. Light any fires you find along the way, to mark your progress. When you reach the temple, slide the cube forward and then to the right on to the pressure plate, then head inside.

Slide the cube around the maze so that it ends up on the pressure plate. Go through the next door and solve another sliding cube puzzle. Head up the ramp and through yet another door. The next puzzle contains 2 sliding cubes and is a little more complicated to solve. Get both cubes into position, then go through the next door. Walk across the raised platform and solve one last puzzle - this one involves 4 cubes but is slightly easier. Just get all 4 cubes on to the pressure plates. After you are successful, the light from this temple will also be transferred Tip Of The Iceberg.

Warm your hands at the fire again, then head outside. This time turn left as you leave your home. The final temple is off to the left, and not open yet, so continue straight ahead over some flat stones in the ground. Light a fire between the 4 pillars as a save point, then turn left and go through a narrow mountain pass to reach a new area.

Keep follow the mountain paths upwards, lighting fires where you can. At several points you will heard a cracking sound; run backwards immediately to avoid being crush by an avalanche. Once it stops, continue forwards once more. You will eventually cross over a very long suspension bridge. Step on the small pressure plate straight ahead to turn a pipe, then go through the open door.

Approach the pressure plates on the left, and step on them to rotate the pipes so that the wind passes all the way to the end and turns a fan. Go through the next door. This time you have to solve two more complex puzzles, one on each side of the room; once both fans are turning, the door will open and you can continue ahead. Approach the massive pipe system ahead and use the pressure plates to guide the wind into all of the brown receptacles. Once you are done, the light will be transferred from this temple When The Wind Blows.

Warm your hands at the fire again, then head outside. Go left again, then once you have lit a fire between the 4 pillars, go straight ahead between some leafless trees into a new region.

This is along long and winding path. You need to avoid the bear traps, which are clearly visible, and keep running to avoid getting killed by the hidden pits and the dart traps. When you eventually reach the temple, pull the lever twice, then go through the archway.

In the entrance of this temple, there are three levers and three concentric rings on the floor. Pull the levers to spin the rings, and get them to line up. When they all point at one of the two side doors, the door will open and you can go through. Solve another puzzle in the side room (with 4 rings and 4 levers). Come back to the entrance and open the other side door, then solve another puzzle. Come back to the entrance one last time and open the main door (now that the two locking bars should have retracted).

Go through to the back room and use the 5 levers to rotate the 5 parts of the statue. You need to have the 4 bottom parts of the statue looking away from the stone with the sun on it, but the head turned to face it. Once you have achieved this, the final light will be transferred Make The Sacrifice.

Warm your hands one last time before going outside. Head left and take the first path to the left, then enter the final temple.

Look at the 4 symbols above the large golden door - light the 4 flames in this room according to this order, then head through. Solve a sliding puzzle with 3 cubes, then continue through the next door. In the following room, you need to rotate the 3 light beams on each of the 3 pillars so that they hit the sensors on the nearby walls; just use the levers around each pillar to do this. Head through the open door when you are done.

In the next room, use the pressure plates to rotate the pipes so that the wind passes through them and blows the large horn - this will open the next door. Head through a long corridor to reach the final room The Cycle Continues.

If you managed to complete the game without dying at all, you will get an extra achievement Untouched.