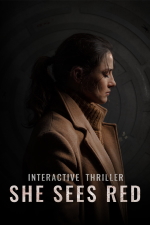 She Sees Red is an interactive video thriller. A murder is committed in a nightclub, and a detective is brought in to investigate. There are 15 Steam Achievements, all documented in the walkthrough below. It will take multiple plays through the game to collect all achievements and view all 62 scenes.

Select No, and the game will end No means no. Otherwise select Yes, and the first scene will be shown (1/62). During any subsequent decision point in the game, just let the timer run out What's the difference?.

You will face your first decision, which will not affect the rest of the game at all:

There is a short scene where the murderer throws a phone on to a shelf (4/62). Now comes another decision, which will cause changes later on:

This section always begins with the murderer hiding at the end of a corridor, accidentally breaking a piece of wood off some skirting (7/62). This is followed by either a shot of the murderer holding the meat thermometer if they picked it up (8/62), or just touching their cap if they didn't pick it up (9/62).

Either way, another scene shows the murderer looking both ways along the corridor (10/62). This leads to the next decision, which may cause changes later on:

Now the murderer is shown noticing a chef and his helper in a kitchen, and then two workmen in another corridor (13/62). This leads to the biggest decision of the game:

The murderer enters the kitchen and hides, but oil drips down and burns their neck (14/62). Now another decision must be made (attack or try to escape), with quite a complex set of outcomes.

If you chose to attack or didn't have the meat thermometer, there will be a fight coming up. You will be shown a scene with the handymen talking about Sergei, saying "Thankfully no" if you chose the distract path in the corridor (15/62) or saying "Someone smashed the light bulb" if you chose the hide path in the corridor (16/62). Next there will be a scene with the chef and helper cleaning up a mess in the kitchen (17/62), followed by a scene based on the decision you just made:

Yuriy will examine the oil dripping down to the floor (22/62).

There is now a short walk down a corridor towards the office, and Yuriy will pick up a note (28/62). Skip the next section and go straight to the office.

There is now a flashback to an earlier event, where the murderer walks down some bloody stairs and puts a sword into someone's mouth (32/62). This leads to a decision that affects the ending:

The next scene involves the detective approaching and looking into the bag (35/62). There is now another decision for the murderer:

There is now a long walk down a corridor towards the office, and Yuriy will pick up a note (40/62).

There will now be a scene where the detective checks the desk and Yuriy asks one of his men to distract her (44/62).

If the murderer took the cocaine in the renovation room, they will drop it on the floor of the office (45/62), otherwise they will just be shown standing empty handed in the office (46/62). Now there will be a short scene of the desk (47/62), and another decision must be made:

The detective tells Yuriy that he should contact his lawyer, then ends up hiding behind the desk (50/62).

If you followed the path through the kitchen, Yuriy will notice a burn on the detective's neck (51/62), then you will have one final decision:

If you followed the path through the renovation room, you will see the murderer waiting with a rifle (54/62), then you will have one final decision: