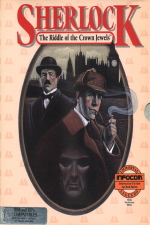 Sherlock: The Riddle of the Crown Jewels

Sherlock: The Riddle of the Crown Jewels is a classic text adventure game by Infocom. You take the role of Dr Watson, accompanying the great Sherlock Holmes on a case to retrieve the stolen Crown Jewels within a 48-hour time frame.

Knock on the door and you will be let inside. Go upstairs and north, and take the newspaper, then show the newspaper to Holmes. Examine the slipper, then get the pipe, knife and tobacco. Wait once, and a visitor will arrive with news of the Crown Jewels. Holmes will give you a piece of paper - read the clue paper to see a riddle.

Wait again and Holmes will leave the room. Go west into Holmes' bedroom and take the magnifying glass, lamp and ampoule. Now head east, south, down and north into the parlour. Take the matchbook, then return south. Open the front door and go outside.

Blow the whistle twice and a cab will arrive. Get into the cab and the driver will ask for a destination. Say "Great Russell Street" and you will be taken there. Exit the cab and read the sign - the museum doesn't open until 8:00am. Wait here until the door is opened, the enter the museum. Head east into the manuscript room and try to open the old book. Tell the librarian to "Shut up", then open the old book and read it to learn about invisible messages.

From here, walk west, south, southwest, south 3 times, southwest and east into Westminster Abbey - this is the first clue from the riddle, indicating that the second, third and fourth clues refer to tombs within the abbey. Head south and southeast, and pick up the pacquet of paper and the crayon. Return northwest and open the door, then go south and west. Read the sign here that mentions Henry IV - this indicates that the fourth clue refers to Henry V. Now go east and north twice. Examine the tomb here to see it belongs to Isaac Newton - the man described in the third clue.

Open the pacquet of paper and take the brown paper. Put it on the tomb and rub the paper with the crayon, then pick it up again. Go east and north twice, and you will note that the room feels different somehow. Just look again and you will see some candles. Heat the brown paper over the candles and read the back of the paper to see some more clues.

Now Holmes says that he knows Professor Moriarty is behind the riddles and clues. Drop all the colored pieces of paper and the pacquet and crayon as well. Go south twice and west twice to return to the street.

Blow your whistle twice, then get in the cab. Say "Marylebone Road", then get out of the cab outside Madame Tussaud's wax museum. Try to head north into the museum but you can't get in with a match or a lamp. Drop the lamp. Put the tobacco in the pipe. Open the matchbook and get the match, then light the match and light the pipe with the match. Drop the match and head north into the museum. Ask Holmes about the ash on the floor. Go west and look at the statues. Examine Guy Fawkes, then take the torch. Try to light the torch with the pipe, but it doesn't put out enough heat. Light the newspaper with the pipe, then light the torch with the newspaper. Examine Charles I, then take his head (clue from blue paper). Melt the head with your torch, then take the emerald. Examine the emerald to see it is scratched. Look at the emerald with the magnifying glass to see "20/6/87". Holmes will give you his ring and tell you to ask for Mycroft if something happens to him. Go east and south to leave the museum. Pick up your lamp and light it, then go east and douse the lamp.

Blow your whistle twice, then get into the cab. Get the cabbie to drive to "Whitehall". Exit the cab and go east and try to go down the stairs, but it is too dark. Light the lamp and go down. Look in the rowboat and take the oar. Go back upstairs and douse your lamp, then continue west, south and west. Haggle with the salesman twice so he reduces his price, then buy the telescope and you will get a shilling for change. Walk east, southeast and up to the clock tower (clue from white paper). Open the bag, then open the blue bottle and the brown bottle. Take the cotton balls and wear them to protect your ears, then wait until the next hour ticks over, and Big Ben will ring. Examine the clapper as it swings by, then keep trying to get the sapphire until you succeed. Look at the sapphire with the magnifying glass to see "2:00am". Head down and northwest, then turn off your lamp. Remove the cotton balls, then drop them as well as your matchbook.

Blow your whistle twice and get in the cab. Your next destination is "Covent Garden". Exit the cab and you will see a girl who has collapsed. Remove your hat and drop it, then take the stethoscope. Wear the stethoscope and listen to the girl. If her heart is beating too fast, she needs an orange pill; if it is too slow, she needs a yellow pill. Pick up the appropriate pill (either from the blue bottle or brown bottle) and give it to the girl - she will wake up and give you a carnation. Remove the stethoscope and put it in the hat, then pick up your hat and wear it again. Go north, east, south and then west into a pet shop. Ask for the pigeon and you will receive it. Exit the shop and blow the whistle twice, then get in the cab. Tell the cabbie to go to "Trafalgar Square".

Get out of the cab and look at the statue, then look again through your telescope (clue from white paper). Show the ruby to the pigeon, then tell the pigeon to get the ruby. Throw the pigeon and it will get it, and then fly above your head. Drop the telescope, then blow the whistle twice. Get in the cab and go to "Pinchin Lane". Get out and head into the shop. Ask for the pigeon and you will receive the ruby. Read the ruby with your magnifying glass to see "Wear a carnation". Exit the shop.

Blow your whistle twice, then get in the cab and go to "The Embankment". Exit the cab and get in the boat. Put the oar in the oarlock and raise the anchor. Launch the boat, and row east twice. Drop the anchor and examine London Bridge to see some moss (clue from brown paper). Try to get the moss but you can't reach it - you need to wait for high tide. Wait here until 8:45am (high tide) and get the moss to find an opal. Read the opal with your magnifying glass to see "Password: Swordfish" (this might not always be Swordfish, so just remember what your password is and replace as necessary). Get the anchor again and row west twice. Land the boat and get out.

Blow the whistle twice and get in the cab. Head to "The Monument" then get out of the cab again. Read the plaque here to check the date of the Great Fire of London. Go northwest twice and look at the urchin. Give your shilling to Wiggins, then ask him to steal a key from the guard. Try to enter the Bank of England to the north, but the guard stops you. Give him the emerald, sapphire, ruby and opal, then enter the bank. Examine the vault door and you will see a dial. Remove your hat and get the stethoscope, then wear the stethoscope and listen to the dial. Turn the dial right twice, then left, then right twice again and the door will open. Drop the stethoscope and enter the vault. From the dates of the Battle of Hastings (1066) and the Great Fire (1666) you know to unlock box 600 (clue from brown paper). Take the topaz and look at it with your magnifying glass to see "Bar of Gold". Leave the vault, then leave the bank and Holmes will be kidnapped!

Head west 3 times, south and west into the Diogenes Club. Ask for Mycroft, then give the butler Holmes' ring to prove your identity. Mycroft will give you a password to enter the Tower of London - remember this password. Go east and blow the whistle twice, then enter the cab. Go to the "Tower of London". Exit the cab and go east twice. A guard will attempt to stop you - just say the password that Mycroft gave you and you will be allowed to pass. Now go north twice, southeast and up. Take the mace. Next head down, northwest and northeast. Examine the keg, then hit the bung with your mace. Look in the keg to see a garnet. Try to pick it up, but you don't fit in the barrel. Ask Wiggins to get the garnet, then look at it with your magnifying glass to see "Give me to Akbar".

Go southwest, east and down to the dungeon. Wear the armour, then return up the stairs, and continue west and south 3 times. Get the paddle and pull the chain (you can't do this unless you are wearing the heavy armour). Go south and enter the boat, then raise the anchor. Launch the boat, and paddle west 3 times, then land the boat. Go east twice, then down and west to find the Bar of Gold. Put the ampoule in your hat and wear the hat. Wait here until 2:00am Monday morning, then ask for Akbar. Say the password you saw on the opal (most likely Swordfish), then give the garnet to Akbar.

Remove your hat and get the ampoule. Now hold your breath (and Holmes will do the same). Break the ampoule, then quickly get the knife, cut the rope with the knife, and tie Moriarty and Akbar up with the rope. When you wake up again, get the key, Crown Jewels and whistle. Unlock the door with the key and open it, then go outside. Blow your whistle twice and enter the cab. Go to "Buckingham Palace". Exit the cab and give the Crown Jewels to the guard.