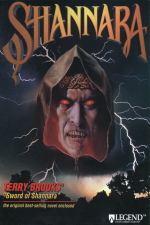 Shannara is a first person adventure game with light role-playing elements, by Legend Entertainment. The story is based on the series of Shannara fantasy novels by Terry Brooks. You take the role of Jak Ohmsford, who must travel the world and convince its people to join forces to battle the evil warlock Brona.

Take the journal and read through it. Now grab the fishing pole and stick, then move the branches with the pole. Attach the stick to the end of the pole, then use the pole to get the locket from the tree. When you are attacked, retreat and you will be saved. Talk to Allanon, then on the map screen, follow the road to the east.

When you reach Shella, move the large rock, then move the log with your pole. Talk to Shella several times, particularly about her lost locket. Give her the locket, then you can start travelling again. Head east to the river, then north until you can cross it. Get back on to the road and head east to Leah.

Head north twice, then west up the stairs. Take the teacup (give any explanation). Now go east, south twice and east into the herbalist's shop. Show the teacup to the herbalist. When you learn of the 3 missing ingredients, grab the green potion and say you think it will help the king.

Head southwest and north, then pour the green potion on the Dogwood tree. Take the flowers. Head north and get the potpourri, then go west and take the steam pot. Pour the pot on the brazier, then get the charcoal from the brazier. Return east, south twice and east to the herbalist. Take the paper from the herbalist, then mix the charcoal with the pestle.

Leave the room after the conversation, and head south twice. Go back to the north and talk to Shella about everything. Go north into the mansion and show the locket to the servant, telling him that Shella wants to see him in the library. Unlock the dragon design on the wall with the locket. Outside the city, head west to the road, then north to the river.

Talk to the gardener and he will attack. Kill the beasts and he will leave. Catch the pully with your fishing pole. Now shoot the brake holding the ferry with Shella's bow. Once you are over the river, follow the road to the north (retreat from all battles) and you will eventually reach Tyrsis.

From the gates, head northeast 3 times, then knock twice on the door to be let inside. Talk to Brendel, then give him your food and talk some more. Go south out of the hut, then southwest 3 times and northwest 3 times. Break a branch off the laurel tree. Walk back to the hut (southeast 3 times, northeast 3 times) and go inside. Give the branch to Brendel and he will give you a torch. Back at the gates, talk to the guard. He will not let you in with the dwarf. Talk to the dwarf and he will leave, so you can go inside.

Show Shella's locket to the Seneschal, then you will talk to the King and be permitted to explore the city. Go west and look at the cabinet door. Read the book on the stand, then exit the library to the south. Talk to the Seneschal and force him to let you read the book in the locked cabinet. Take the book and read it, then cut it with your knife.

Go south and ask to examine the throne room. Go north and oil the lion's jaw, then pry it open with the knife. Push the candleholder on the wall, and unlock the keyhold with the skeleton key. Now push the tapestry and go through the secret passage. Light the lantern and the candle. When you get the opportunity, break the dark mirror with the sword. Just walk forward and turn left or right to exit your dream. After you wake, look at the skull, open it and take the scroll. Go south twice and invoke the scroll on the book. Suggest summoning Stenmin, then tell the king that the book will help, and that you will do whatever it takes to get the sword.

Take the mace, then go northeast to the wine cellar. Put the incense and the pact on the floor. Get Brendel to put the mace on the floor, then light the incense with the tinderbox. Invoke the book on the pact and the mace. Talk to the shade, then invoke the book on him. Talk to him again and he will be be more helpful. Talk to him again to banish him. Grab the bottle and the mace, then fill the bottle from the cask.

Walk northeast, south, and northwest 3 times. Take the laurel leaves and put them and the potpourri in the bottle. Head southeast 3 times then northeast 3 times. Get Shella to climb the oak tree, then put the mistletoe in the bottle. Go southwest 3 times, then north and east. Pour the potion on the flame barrier. Back at the map, follow the road to the northwest until you reach Arborlon.

Introduce yourself to Lessa, then go north twice. Ask about the Elfstones, then look at the parchment. Try to light the fireplace. Head south, then north and northwest. Go south and ask Davio about the Rune Diamonds. Fill the hole in the fountain with Shella's kerchief and you will find the water rune. Fill Brendel's pot with some clay from the ground. Go west and remove the vines, then close the gate and get the life rune. Open the gate again. Go east and south, then give the rope to Lessa, asking to borrow the ladder.

Climb the ladder. Get the shingles and remove the bird's nest. Oil the weather vane, then turn it (and you will sketch its image in your journal). Go south and give the journal to Brendel. Go north and light the fireplace, then go south and climb the ladder again. Put the shingles on the metal piece to create another rune. Go south and take the ladder, offering to help Lessa. Go north twice and show the ring to Davio. You will speak to the Prince again - as you leave ask for the amulet and he will refuse it. Go south twice and give the gold ring to Lessa, then talk to her and describe your problem with the Prince - she will get you another rune. Now put the clay in the carved stone. Pour some water on the flagstone and take it, then put the flagstone in the clay. Take the earth rune.

Get Telsek to pick up the boulder, then throw it at the arch. Try to go north and you will be ambushed. Immediately order Davio to use the Elfstones and the leader will vanish. Kill the other four and the fight is over. Head north into the cave. Light your lantern, then show the letter to Aine. Talk to him, then look at the dark object and talk again. Tie your rope to the Black Irix. You will be guided to a war ground.

Battle on the Plains

Go east, then retreat from the battle. Talk to the Troll king, then head west twice. Give the letter to the guard. Go along with the story and a riddle contest will begin. Head west and search the nest, then give the feather to Telsek. For the second riddle, head west twice then north. Get the spoiled wine from Brendel, then head back south and east twice. Give the wine to the cook and he will give you some worms. Head west twice and put the worms on the fishing pole. Fish in the stream with the pole. At the next riddle, go west twice and talk to the guard. You will eventually get his shield. Ask a riddle about the Elfstones. Win the ensuing battle, then you will be at the map screen. Go east through Jannison Pass. You will be ambushed and Davio will be poisoned - continue the battle anyway. Once through the pass, head south until you reach Storlock (quite a long way).

Go northeast to find a monster. Wrap Shella's kerchief around an arrow. Now put some of your oil on the arrow, then light the arrow. Kill the monster, then Davio will be healed. Talk to the healer, then head southwest. Go past the Wolfsktaag mountains, then turn southeast. Go between the groups of monsters to reach the Silver River. You will be ambushed, but then saved and taken to your next destination.

After talking to the king, head east twice and talk to everyone. Head west and north to where the hammer is usually kept. Now go south and look at the cupboard. Go east and talk to Davio, asking to see the missing stein. Open it, then go west and give the sash to Kili. Kill him in combat, and the king will apologise. Open the backpack on the floor. Go north and put the handle in the hole in the wall. Push it to discover the hammer.

Head northeast, then discuss your plans. Pour your magic dust into the pond. Now invoke Davio's Elfstones on the dam. Win the battle on the bridge. You will be carried down the river. Head directly north when you regain control.

Head northwest. After Davio has the rope, go northwest again. When Shella is dying, you can decide to use the Elfstones to save her, but the game will end. The better option is to use the Ritual of Release (kill her).

Touch the boot heel, then push it to expose some nails. Cut the rope with the nails. Take the coarse rope, then cut the left side of the tent with your boot heel. Go west. Now cut the next tent with the boot heel and go inside. Take the magic Torc from around the Shaman's neck, then gag him with the blindfold and tie him with the rope. Head east twice and unlock both chests with the key ring. Open them both. Go west twice and talk to Geeka - he will accompany you.

Go east twice and get Geeka to carry the chest on the left. Now use his handle in the hole. Tie your rope to the chest, then push the chest into the hole. Tell Geeka to climb down, then climb into the pit after him. At the bottom, use Brendel's warhammer on the grating. Now get Brendel to attempt to enter the hole (he will find a box).

Head west. Use Geeka's handle in the hole. Go east twice. Open the metal plate, then fix it. Get Telsek to use his Black Irix. Now have him turn the wheel and open the metal door. Go north.

Head north, then win a battle to enter your final destination.

Get Telsek to push the statue, then go north. In the combat, get Davio to use his Elfstones. When he tries to use them a second time, allow him to. Take the Magical Diadem that falls. Go north, then south. Get Telsek to take the broken door. Go north, then get Brendel to lift the cage bar. Ask Geeka to help you escape and he will die. Push the cage bar forward, then tie the rope to the bar and climb down it.

Look at the top of the idol. Throw Brendel's warhammer at the crystal eye. Fight the 3 zombies, then climb the idol. Draw the Sword of Shannara. Walk through the halls answering the questions put to you. Once the dream is over, attack the book with the sword to complete the game.