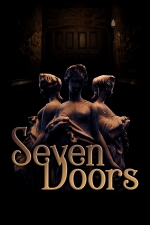 Seven Doors is a first-person puzzle adventure consisting of a series of seven challenges. You play as an unnamed protagonist, finding yourself in the entry of a large building, where you are greeted with an enigmatic message that there are seven doors you must pass through. You must head through the doors ahead to begin your journey.

Explore the shelves on the left to find a single book called "Kill the Dead Man". Take the pistol and bullets from a table on the right. If you need more bullets there are some on another table near the far end of the room. Look up and shoot the skull attached to the chandelier. Pick up the gold skull and insert it into the gold plaque near the exit door. Head through both sets of doors to a new area.

The Enigma of Chaos

The statue in the middle of the room is surrounded by 4 bowls, each containing a riddle. You need to find the objects within the room matching the riddles:

The Museum of Soulless Men

There is only one safe path through this room, but if you die you just get to restart the level. From the entrance, turn right and go all the way to the wall. Turn left and go just to the side of the figure crouched on both knees, then continue forward between two standing statues each with one hand outstretched. Turn right before the creature in a cross-legged crouch.

Turn left now and go forward to collect the gold skull from the bowl being held by the nearby statue. Continue straight ahead to the wall, then follow this around to the right. Insert the skull into the gold plaque, then head through both sets of doors.

The Gallery of Framed Dreams

The plant in the middle of the room is surrounded by 4 stands, each holding a riddle. You need to find the artwork within the room matching the riddles:

Construct a code from these 4 numbers, and enter 6289 into the combination lock. Take the gold skull and insert it into the gold plaque near the exit door. Continue through both sets of doors.

The Hall of Tragic Fate

Time your passage beneath the middle guillotine straight ahead. Wait until both of the swinging axes move the same direction then quickly run past. Time another run between the two rotating horizontal blades ahead. Open the doors ahead and go through. Step forward until a flaming torch on the wall springs to life so you can see the path ahead.

The Secret of the Pharaoh

Now continue to the end of the main corridor. Go around to the right of the statues and read the note, which mentions that the remaining symbols represent planets and ancient Gods. Turn over this note to see these remaining symbols (Mercury, Venus, Earth, Mars, Jupiter, Saturn, Uranus, Neptune, Sun, Moon). Now pull the lever in front of the statues, then quickly go through to the hidden room next to where you found the note.

With the aid of the information you have gathered, you can decode the meaning of the symbols on the wall here:

Based on this, out of the eight possible gods, you need to determine the correct order for four of them. The correct order is: Neptune, Earth, Jupiter, Mercury. Look at the buttons on the opposite wall and press them in the following order:

Go through and pick up the gold skull, then insert it into the gold plaque. Head through both sets of doors.

Read the typewritten paper on the table to the left, which details the rules of chess. Laid out before you on the floor is a chess board containing multiple pieces. You need to find a safe path across the board:

Leave the board again and insert the gold skull into the gold plaque. Head through the final door.