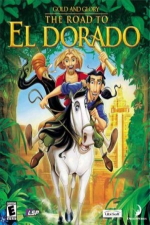 Gold and Glory: The Road to El Dorado

Start off by taking the poster from the wall. Spend your lonely 1 peseta buying a bag of corn from the first shop-owner, then head north and use it to catch the chicken. Head back south and sell this chicken to the other shop-owner, then go inside to the right. Gamble with the man at the table, winning his map to El Dorado. Head to the docks where you will discover that women are able to sail free - you need a change of costume.

Now head back past the corn seller, through the gate and to the left, where you will meet a bull-fighter. Go two screens to the right to find another bull-fighter, who claims to guard the dangerous bull El Diablo. Tell the first bull-fighter about this, and he will follow you to the gate. Unlock the gate and stand back. Now ignore the bull for the time being, and go up the stairs until you find a little boy with a slingshot. Get Miguel to get inside a barrel and walk close to the boy so he runs away. Grab the slingshot, then keep following the path you are on to find a gate with a dress behind it. Shoot the bull with the slingshot, then make your way back to this gate. Hang your wanted picture there and the gate will be destroyed. Take the dress (you will lose the slingshot now) and go to the docks. While the man is distracted, have Miguel sneak behind him.

Note the donkey - you need a carrot to hang in front of it. Go around behind it and get Miguel into a barrel again. Have him sneak past the guards to get a carrot, but be careful only to move when the guards are not looking. Put the carrot in front of the donkey and the conveyor will start. Now go and flip the switch on the wall, then get both characters to climb the ladder and get into a barrel.

Voyage to the New World

Grab the apple and climb up the thick beam, using the apple at the top to be rewarded with a boat hook. Use this to pull down the rope ladder, then climb up and look through the gate. Steal the pirate's cookies, then give 2 of them to the ape in exchange for 2 keys. Swing across to the other gate using the monkey-bars and try to unlock it. Go back and swap keys until you have the correct ones. Go inside and the other pirate will throw you back in the hold.

Now as Miguel, get Tulio to keep thinking until he knocks the ladder down. Climb up and go into the cannon room, sneaking over to the bandana. Put it on, then get some of the pirate's socks and start polishing a cannon. You can then take the cookies and head back to the hold. Try to lift the grate on the left and it will fall down - Altivo will send down another boat hook. Prop the grate up with the hook, then throw down a biscuit to capture the rat. Pick it up in one of the socks, then go upstairs and scare the pirate with the rat. Now use a sock with the jug of oil, then light it with the lantern.

Walk out through the big hole and Tulio will climb up onto the deck. Give one of the apples to Altivo, then take the rope attached to him and tie it to the metal ring so that Miguel can climb up. Get Miguel to untie the life raft, then grab an apple and put it on the plank.

The Search for El Dorado

Take the sword, then climb up the bird-shaped rock and cut the vine - take it with you. Now use the sword to cut through the bushes and head left. Note the snake, but keep walking to the left. Take the flute, then go back and play it near the snake to make it leave. Bibo now joins you, and Tulio takes over. Head back to the left and get Miguel to hold down the tree. Tie the rope around Bibo, then put Bibo on the tree and he will drop the rope down to you. Climb up the rope. Take the loose branch and walk right to the next screen. Use the branch to make the rocks fall into the stream, then jump across. Keep jumping across the next two screens (you have to do it for both characters), pushing the rock at the end into the water for Miguel to finish his journey. Bibo will join you as you find the next area.

Follow Miguel onto the next screen, where you can pull a lever - Miguel and Bibo will disappear, but Tulio can keep going. In the next few rooms, just keep pulling the levers until you notice a door that you haven't been through before - go through here and then up a lift. Go through a similar sequence with Miguel and you will find Tulio again.

Bibo will rejoin you when you pull the next lever. Note the hole into which a woman's statue might fit, then head left. Walk around to the back of the weeping woman, and get Bibo to enter the hole. Move the statue out of the way, then push the stones onto the floor panel. Now you can push the statue all the way outside. Carry it back to the hole you saw earlier and the waterfall will stop. Climb up the ladder to end the level.

The Roar of the Stone Jaguar

Start off by walking Tulio toward the upper left statue - note the bottom right one lights up. Walk Miguel there and play it a tune on the flute. Tulio can now take the golden plate from the middle of the screen and offer it to the top left statue. Miguel must use the sock on the bottom left statue, and finally Tulio should jump to the top right one and give it a biscuit. The two can now run down the bridge to the next screen.

Have Miguel start jumping and veer to the right so that he finds a lever to pull. Then use Tulio to reach the door that was opened and pull a lever inside to reunite the two. Climb up the ladder.

You need to use a similar tactic to the skulls and levers earlier to navigate the first part of this set of screens. Make sure that you avoid the green spiders and take a custard apple on the way. You will get a suggestion to crush a spider near the top left of the building - place the custard apple beneath the small lift and run away. Pull the nearby lever when the spider goes to the apple. Over on the top right of the building, you need to time multiple pulls of a lever so that a spider is trapped and unable to harm you any more. Once that is achieved, you can safely walk to the end of the level.

Walk to the room on the right and explore all the rooms that way to collect 3 cogs. Now head to the left side of the area and place the 3 cogs on the 3 spindles - you will get a sun gem. Head through the door that requires you to have this and you will see a lever behind a grate. Try to open the grate and a jaguar will spring to life.

Miguel needs to pry a blue eye from a golden face on the wall, using his sword. You also need to use the sword to force open 2 water gates, then go through the door right next to the last one Tulio went through, using your blue eye. A similar jaguar comes to life when you try to open the 3rd water gate.

To survive both jaguars, use the same ploy - run away! Make sure that the jaguar is reasonably close behind you all the way, heading towards the farther of the two big trapdoors. When it is nearly upon you, pull the lever and the jaguar will fall into a big pit. Miguel must then open the 3rd gate, then go to find Tulio and pull the lever. Run outside to complete the game.