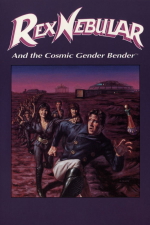 and the Cosmic Gender Bender

Rex Nebular and the Cosmic Gender Bender is a classic 3rd person point-and-click adventure from MicroProse. You play as interstellar captain Rex Nebular, on a mission to retrieve a vase from a distant planet. After being shot down, you are held captive by the female natives of the planet, who want to use you for procreation.

Swim east, and grab the dead fish that is lying around somewhere on one of these screens. Put the hamburger in the fish, then head southeast. Throw the fish at the hole in the lower right of the cave - the tentacle will die. Enter the caves, and eventually exit the water and walk east.

Walk north and get the big leaves, then go east and get the bamboo stick. Go west twice, into the headhunter's hut, and get the poison darts. Leave the gut and go west again. Walk past the tree and get mugged, then get up and go east 3 times. Put the darts in the bamboo stick. When the thief sticks his head up, shoot him with the darts. Get the binoculars and head west to find a native girl. Talk to her and answer with what a typical guy would say. After the little break, get a twinkifruit from the sack on the wall. Leave the village and go to the screen where you took the leaves. Put the leaves on the pit, and the twinkifruit on the leaves. After the bouncing woman gets stuck, go north twice. Get the 2 bones from the ground, then climb the ladder and look north with the binoculars. Note the numbers typed in on the keypad, then head north into the booth. Type the numbers and hit the smiling face to teleport.

Once you are in your cell, talk to the alien next door. You will be taken away on a gurney - when they leave to check out the explosion, grab the scalpel from the tray. When the doctor comes back, answer the questions correctly to avoid dying. Talk to your alien friend when you return to the cell, then pry the back wall-grate open with your scalpel. Go inside, and head to the cell furthest to the left. Push the grate open and look at the computers. Press the red button twice, and when the mayhem is over, walk east twice. Get the security card from the body, and walk east again. Get the tape and return west until you reach an intersection. Head west again and enter the gender bender. Go east, north, north, and get the tape player. Get the severed arm from the floor, and put it on the handprint ID on the far wall. Get the things from the cabinet, then go north. Get the credit chip from near the body, then walk back to the intersection and go south. Enter the ladies' club and sit on the empty barstool. Steal the repair list from Helga's pocket when she isn't looking, then talk to the bartender - buy the vodka. Leave the bar and head south. Put the security card in the card slot and enter the armory. Get the targeting module from the box, then leave and go east. Use the card to enter the storage room. Get the charge cases out of the box, then leave the storage room and go into the room with the blast under the door. Pick up the vials of petrox, lecithin and formaldehyde from the desks. Put the tape in the tape player and listen to it. Mix the ingredients as on the tape (using vodka as the alcohol), and put the explosive formula in the charge cases, then leave the room.

Go to the teleporter booth next to the armory. Look at the repair list, and use the number belonging to the booth on the planet's surface. Go to the hut where the native girl was and go north. Talk to the other girl, then take the chicken off the spit. Go back to the teleporter and use the prison code you used the first time. Go back to the intersection, go west, and turn back into a man. Go to one of the teleporter booths, and look at the repair list again. Save your game, then try the 8th number on the list (if you die, try another nearby number).

Walk west and get in the car. Activate it and use the buttons to go to the residential area on the upper level. Go into Bruce's pad, then walk east and get the compact off the dresser. Leave Bruce's and drive to Abdul's body shop. Throw the bone over the fence and go into the shop. Throw the other bone onto the danger zone on the floor, then press the down button on the wall. Go to the cabinet on the east wall and get the polycement. Get the rearview mirror that's lying around, then leave and drive to MachoProse. Go inside and get the penlight. Leave the building and enter the lab on the left side of the screen. Flip the lever on the laser, and put the compact in the beam. Return to Bruce's place, and put the rearview mirror in the beam. Get the key from the safe and leave.

Drive to the Sandbar Resaurant and go inside. Get the padlock key out of the cash register, and the fishing pole off the wall. Now drive to the expressway and use the padlock key to unlock the box and lower the winch. Drive to Buckluster Video. Walk down the alley and talk to the hermit. Go inside Buckluster using the key from Bruce's. Get the phone and go back to the hermit. Disassemble the phone and the penlight. Give him both sets of batteries, then take them back to Buckluster and put one pair in the phone again. Put the phone back on the unit, then leave and come back and the batteries will be charged. Charge the other set the same way, then take them both back to the hermit. Get the fake ID, then drive to the Mall and use it on the elevator door. Once you're up, use the binoculars to look at the tall building in the distance. Disassemble the fishing pole and tie one end to the metal hook on the concrete post. Walk east and get the real ID off the remains, then leave. Drive to the Sandbar again and tie the other end of the fishing line to the boat. Drive to the sea wall and put the timing unit on the charge case. Put the timebomb on the shelf under the window.

Drive to the mall and use the elevator. After the city floods, put the other charge case in the chicken. Pull on the fishing line and hop in the boat. When the sea monster pops up, throw the chicken at him. Sail north, and take the bottle, then sail north again. Get out of the boat and save your game. Fill the bottle with water (try half full), then go inside and swap the bottle for the vase. If you die, try another amount of water in the bottle. Enter the teleporter, and use the code before the Machopolis one on the repair list.

Get out of the transporter, and look at control panel on north wall. Make sure Pad 2 is on "Timer", then push the start button. Wait for the time to run out and the ship to land again. Switch Pad 2 to "Remote", then walk east. After the coconut falls, get the remote and the shield modulator hanging from the wire. Go east and enter the ship. Look at the service panel on your right, and put the shield modulator and targeting module in the 2 slots. Put the polycement on the crack in the canopy. Activate the remote, and pull the throttle on your left to finish the game.