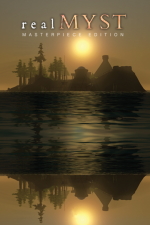 RealMyst is a remake of the original Myst, which was the first in a series of fantasy adventures created by brothers Rand and Robyn Miller. The games are set in fictional realms known as Ages, which can be accessed by "linking books", and you play as The Stranger, a visitor to the Ages. This version of the game features improved graphicas allows free movement in a realtime nature, rather than step-based movement from the original game. Another newer version of the game has also been released, returning to the original title of Myst.