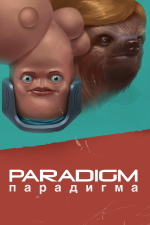 Paradigm is a surreal post-apocalyptic adventure set in the fictional Eastern European country of Krusz. You play as the titular Paradigm, a mutant who must contend with a past that has come back to haunt him. There are 18 Steam Achievements, all documented in the walkthrough below.

Try to use the computer, then try to talk to John 3000. Pick up the adaptor from the barrel to the right, and use this on John 3000's cable. After talking to him, search the record collection and pick up the Sean Sensualsteen record. Give this to John 3000 - after you finish talking to him about everything, head outside.

Talk to Doug and listen to him drop some beats Dope. Search the mailbox to get another mailbox, use this in your inventory to get a 3rd mailbox, then use this to get a postcard and a bottle of vodka. Give Doug the postcard, and it will become your map - use this to travel.

Go up to the gate and take the pocket knife from the tree on the left. Use the intercom, and the drug dealer will ask for the severed head of a policeman.

Pick up the pure ethanol from the left, then put both this and your vodka into Igorshki's bowl. Now you can pick up the cone and combine it with your rocket.

Answer the call from John 3000, then use your rocket cone on the launchpad.

Look at the paper aeroplane bird message. Use your army knife on the mannequin to remove its head. Also pick up the police hat, then combine it with the mannequin's head.

Use your fake severed policeman's head on the intercom, then head inside. Talk to the drug dealer, then try to pick up the controller from the floor.

Pick up the console controller from the right.

Go inside and swap your controller for the existing one, then beat the first level of the game. Talk to the drug dealer again, then to the drug dispensing octopus on the left to find out that you will need a cheat code to beat the game completely.

Look at the radio transcript on the side of your trailer, and select the first option. Directly under the name of the game you have been playing is the code "Zeldario Zany Man X Zone". This tells you the secret code: ZZXZ.

Use the controller inside to play the game again. Enter the code ZZXZ. Now give your super fun happy drug token to the octopus to get some Space Dust.

You will automatically arrive here and give the drugs to the astronaut. Pick up the floppies from the ground.

You will now automatically arrive here to find Doug on the ground. Talk to the water robot and boost him, then force a smile when prompted and he will kill himself. Now head into the power station.

Pick up the MegaBRO Dupagen, which will act as your new map, and allow you to play mini-games. Play the Post-Apocalyptic Dating Simulator game and play with Noodle Hands Nelson Oh My What Long Arms You Have, Tina Toaster Toast My Buns, and Jerry the Human-Duck Quak Me Hard. Go right twice and answer the call from John 3000. Look at the vending machine on the right. Enter code 666 to get a special audio tape (2/6) Kvlt Grooves. Enter the elevator to the right. Repeatedly use the arm to give it a high five High Five Me Again, Yeah. Look at the graffiti on the wall. Now look at the elevator panel and press the "Call Maintenance" button to get a clue about a code. Next press the button for the Labs, then Activate. Exit the elevator.

After meeting the Rebel Leader, you will receive a story book, and the other floors will become accessible from the elevator. Pick up another audio tape (3/6) from the desk on the right, and the arm from the middle of the floor. Return to the elevator and use the panel to get to the lobby.

Collect an audio tape (4/6) from the chair on the left, and a lance from against the wall. Use the cursed flowers (twice), then walk into the mouse hole on the right We Don't Go There. Uncurse yourself, then return to the elevator and go back to the offices.

Talk to the nun about everything and you will receive some toffee and a phone number. Talk to the leg, but it won't come with you yet. Take the audio tape (5/6) from the offerings table, then return to the elevator and go back to the offices.

Use the Instant Swedish Person on the leg, then pick it up before going back to the elevator again. Remember the clue about a code in the elevator? Press the service button at the top left, then following the information from the graffiti, press Labs once, then Call Maintenance 10 times. After the lights turn red, pick up the arm from the wall. Now use the elevator panel again to travel to Head Mart.

Use the terminal and you will automatically hack in to get access. Try to retrieve any head, and there will be an error message about lack of Wi-Fi signal. Return to the elevator, select the new destination and get out again.

Double-click the hidden icon "Virus.exe" on the right Notavirus.exe. Now try to open the door, and the system will crash and restart. Go to Settings, activate the pen, then pick it up. Activate Jack's special folder, then use it and you will end up with a laser gun. Use this on the email icon, then pick up the email. Now activate the Desktop advice giver guy, and keep talking to him Qualified IT Consultant. Walk to the bottom left of the screen so you are really tall, then activate Lock Size. Get some paper from the recycle bin, then use your pen on it. Activate the Postal box, and post your letter. Now use the door. Use the router on the table to reset the Wi-Fi, then enter the elevator.

Look at the post-it notes on the right to get the name of the scientist.

Use the terminal and choose Reginald Jorpodoskovosoki. Pick up the head.

Use the shopping bag on the limb depository, then talk to the scientist about Olof, before pressing the yellow button once more.

Answer the call from the scientist. Pick up the audio tape (6/6) from the table High Fidelity, and the nearby space cactus Succulent Space Odyssey. Look at the translator blue prints. Use the clone machine on the right to generate 3 clones of yourself, and place one clone in each quadrant of the room. Now use your big floppy in the computer on the left.

Go down through the basement hatch and press down on the elevator controls 3 times.

Use the root above the toilet in the corner Down in the Dungeon. Talk to Steve Lichman here, then leave again. Talk to the hole in the wall just to the left of the toilet There's No Place Like Wall. Look at the flat screw over in the art show. Leave by going ot the left, then make your way out of the basement and back to the main elevator. Head to the offices.

Talk to the cupcake salesperson and you will use your PAGST membership card - select the screwdriver cupcake. Now use the cupcake in your inventory to get a Phillips screwdriver. Go left into Hallway 2 and press the red button on the wall, then pick up the laser pointer. Return to the elevator and go back to the lab, then down to the dungeon.

Use your Phillips screwdriver with Hammer Head and you will get a flat screw driver. Use this on the flat screw in the art show. Look again to see there are now several mini flathead screws to remove.

Use your bobble head on the confessions box to create a disguise, then use the bottle of whiskey on the offerings table. Now take money from the donations box. Change back out of your costume, then go and talk to Pug. Ask to borrow his necklace, then challenge him to turn-based combat. Start by selecting Fight, then Defense Keeps Me Company. Now select Item, and use the laser pointer on him. After you win the battle, you will automatically take the necklace.

Use your coin in the vending machine, then press 6 and Enter to get a packet of seeds.

Talk to the rebel leader now that you have all the ingredients.

Use your door remote (from the necklace) on the lobby door. Use the cursed flowers, then go through the door.

Approach the sloth head, and you will reach an advertising barrier. There are 2 ways to proceed:

Head past the advertising barrier and enter the sloth's head.

Look at the security monitors. Let Olof go through his monologue, then select the Actual Ending.

Use the potato on the left to unplug it. Use your army knife on the can of chunder - loot its body and take as much of each type of candy as you can. Give one protein candy to the mouse generator. Eat 5 energy candies, then use the battery on the far left to unplug it. Use your nutritious soil on the cat shit in the middle of the floor, then plant your seeds in the dirt.

Go inside and talk to John 3000, then keep driving until you enter Woof Woof Tunnel and meet up with Paradigm Koniec.