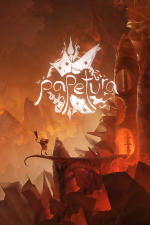 Papetura is a third-person fantasy adventure set in a world created entirely from paper. You control Pape, who escapes from a flower prison and meets a magical creature Tura. Together you must face a series of enemies trying to burn down their paper world. There are 10 Steam Achievements, all documented in the walkthrough below.

Cross over, then climb up the stalk to the surface of the flower. Go right and talk to the creature here FLYTRAP. Use the hint icon at the top right of the screen, then play a mini-game where you must collect all the small bugs.

Climb back down and push the creature left into the prison, then follow it there. Push it further left until it eats the large fly. Now push it right until it returns to the base of the stalk. Look carefully at the creature and note which 4 of its 6 small segments are glowing (this is random). Climb back up the stalk.

Now you need to climb to the top of the 6 stalks and knock them so that the same 4 stalks glow to match the glowing segments on the creature. Climb back down and push the creature further to the right, then follow it through the new opening.

Keep pushing the creature right until you see another of your enemies BRANCHES.

Run to the left, avoiding the falling embers. Go down on to the top path and push the creatures down, then go beneath and remove the 3 seeds (from right to left). Now go back up to the top path and continue to the right. After going over the curved path, go left and move the paper to free the small black creature (Tura). Click on it to end up inside a much larger creature TAPEWORM.

Grab the seed on the left, and you will be able to shoot seeds like you previously shot small flies. Shoot a seed at the creature in the water on the right. Now it will start to follow you - try to get it hit by a large falling seed while it is near the middle, then climb on top of it (if it gets hit near the side, just shoot it again and try once more. Once you are on the swimming creature, go to the left.

Shoot the hanging creature with a seed, and it will retract up towards the ceiling. Return right until it ventures back down, then slowly move left until you can talk to it. Use Tura to clear its blockage (drag the debris out until it is completely empty). Now ask the hanging creature to bring the water level down, so you can continue left.

In the next area, shoot a seed at the dangling vine, then quickly head past. Continue up some stairs to reach the next room.

Step out on to the open platform KEY. Go left twice, then walk down and shoot a seed at the sleeping creature to wake it up. Follow the creature back upstairs, then keep going up the winding paths and out through another door. Climb up to the broken ladder above. Shoot seeds into the 3 cups on the sides of the ladder to bring it down, then climb up.

Speak to the creature in the top chamber - it will give you access to the key in exchange for a bottle, a book and some glasses. Now shoot seeds to light up all the floating spheres (you need to bounce the seeds off lower spheres to reach the higher ones) BRAIN.

Climb back down the ladder and down the slope to the right, then continue right over the bridge above the key, and through another doorway. Go over and collect the worm. Now you can go fishing in the lake here - you need to get the squid at the bottom, and one of the larger fish. You need to wait until all of the smaller fish are over towards the right, then cast your worm to the far left.

Leave by going left, then continue over the bridge and into the building to the left. Talk to the bartender, and you will trade your squid for a bottle. Go down and talk to the librarian, and you will trade your fish for a book. Climb down the stairs and go down to the left. Walk towards the hanging vines. Shoot them all with seeds, then quickly go right. Follow this path to find a new room. Remove the dark picture from the wall, then go and close the window blind on the left, and look at the snake pattern revealed on the wall where you took down the picture. Go and press the circles on the pattern from the head to the tail. Now you can take the glasses.

Go all the way back up to the creature in the top chamber, and you will hand over the 3 items he requested. Tura will dive into the creature's mouth. Playing as Tura, you need to touch each of the pods so they are all glowing at the same time BUGS.

Continue through the open gateway. Grab the key, then dodge the other creatures until you can leave back through the gateway and return to Pape. Climb back down and make your way back to the creature that lowered the water level for you. Get it to raise the water level twice. Head right and unlock the door with your key. Shoot a seed up through the holes in the ceiling of this room when the creature is inhaling, and you will be sneezed out BALLOON.

Climb up on the right and jump into the balloon. Fly upwards, and shoot seeds into the mouths of the creatures when they are open. Keep going up and go down on to the top of the steam vent to further inflate your balloon. Now shoot a seed into the steam vent, then block the opening just below and to the right SACRIFICE.