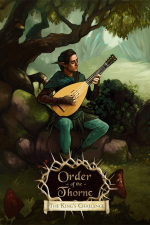 Order of the Thorne

The Order of the Thorne is a classic third person fantasy adventure about Finn the Bard and his quest to compose the greatest ballad ever. There are 13 Steam Achievements, all documented in the walkthrough below.

Talk to Chucker, the guy at the fountains Chucked It In. Head inside and talk to the King about everything, then go back outside and climb the stairs. Enter the tavern and talk to both Elka and Faolan. Go back down to the fountain and head east. Talk to Brother Kunchen in the monastery, and Glenda in the potions shop. Return to the fountain, then head west. Talk to Stefan in the general store, and Elder in the library. Go upstairs in the library and read the open book on the desk to receive a map of the land. Head back downstairs and talk to Elder about the map, then leave again. Go to the fountain once more, then head south to leave the town.

After the red pixie steals your book of songs, follow her west. Read the sign, then go north towards the lake. Talk to Faolan here, then continue east along the path and pick up the glowing wilted flower. Go north and talk to red pixie in the tree (the others won't talk to you). Return south to the pond, then head east. Talk to the boy and girl at the picnic, and pick up the watermelon. Go north to the angry tree, then east to find a fisherman. Talk to Fisherman Ted and Turtle, and you will learn a song. Pick up the bamboo from next to the trees on the left. Try to enter the swamp by heading north through the trees, then talk to Turtle again.

Return west and south twice, then east over the bridge and along the path to the south. Follow the high priest east and you will see him leave the kingdom High Priest. Talk to the border guards and touch the border stones. Return west and go south, then search the hole in the tree here to find a gnome's treasure chest - you will end up leaving to the west. Pick one of the mushrooms here (it has a purple underside). Go north from here and you will learn 2 more songs. Head west and south to find a sleeping white bear, then walk east twice and you will witness the gnome being saved by Snow and Red.

Next go north twice and then west 4 times to reach an area with spider webs. Try to go north and you will be stopped by Esmerelda. Try to go north again and talk to her about everything. Touch the border stone here, then return east and go south. Try to cross the bridge, but the troll will stop you. Return to the picnic area by going east twice and north twice, then continue east and look at the beehive. Ignore this for now and continue east. Talk to the ferryman, and give him your gold coin. Pick up the green cloak before going east and reading all of the memorial stones Honors Student. Return south and get on the ferry. Once you have returned to the mainland, use your lute to play "Stairway to the Other World" to get your gold coin back. Return west and play "The Ode to Peace" to calm the bees, then use your green cloak on the beehive to pick it up.

Walk west, south, east, south, west twice and south to find the white bear has the gnome pinned to the ground. Combine your bamboo and beehive, then use this on the bear. Go east twice and search the hole in the tree - this time you will get the treasure chest He is Gnomor. From here, head north twice, west twice, south and west. Give the treasure chest to the troll Paid the Troll Toll. Continue south and Faolan will rescue the girl. Pick up a rose from here, then return to Crann Naoimh by going north twice, east, and north up the hill.

Go east and into the potions shop. Give the rose to Glenda, then play "The Fisherman's Love Song" on your lute Perfect Match. Return outside and west, then climb the tree. Enter the tavern and talk to Faolan Faolan's Story. Leave and climb back down, then go west and enter the general store. Give your mushroom to Stefan and take the empty jar from the shelves. Go back outside and head east twice, then enter the monastery and talk to Brother Kunchen once more. Leave the town by going outside, west and south.

Head east, north twice and east again. Talk to Turtle and you will learn a new song. Enter the swamp to the north. Use your lute to play "Song of the Turtle" to calm down the raptor. Head west and approach the water on the left to wake up the sloths. Return east and north out of the swamp. Talk to Turtle, who suggests asking Elder about the sloths. Return west, south twice and west, then go north up the hill.

Walk east, north twice, east, and then north into the swamp. Use your chicken soup on the raptor, then get it to follow you west and it will scare off the sloths. Now dive into the water. Once you emerge on the other side, go west and north. Look at the spider web here, and look at the pixie wing caught in the web. Use your glass jar on the spider to capture it. Continue north and west, and you will see the knight heading off towards the seer. For now, head south and west so you can collect the pixie harp Swamped. Next go east and north twice to reach the seer A Knight to Remember. Talk to Yamma Uba and she will give you a challenge, where you must use vials in her cauldron in the correct order. When prompted, use the blue vial, then the yellow vial, and finally the red vial Seered to Perfection. Go into the seer's hut and search the chest to get some Ueli juice. Go back out and talk to Yamma Uba again, then leave to the west. Give the harp to the red pixie. Use the spider in a jar on the red pixie, and you will get your song book. Return to town, by going south, west, south, east, and north up the hill.

Head east and enter the potions shop. Talk to Fisherman Ted, then give the watermelon and Ueli juice to Glenda, and you will receive a restoration potion. Return outside, then go west and south to leave the town.

Go west and use your potion on the crystals to change it to a restored potion. Now use this on your wilted flower to bring it back to life. Go north, east twice and north to find the angry tree. Plant the pretty flower in the mound of dirt in front of the tree, then use your lute to play "The Happy Song". Now you can collect some Firienne berries Drops of Juniper. Go south, west, north and east to return to the seer in the swamp. Give her the berries, and she will tell you to see Brother Kunchen about a song. Return west, south, west, south, east and north up the hill once more.

Go east and enter the monastery. Talk to Brother Kunchen to learn a new version of one of your songs. Play all of the songs on your lute in hard mode Musical Genius. Leave town by going outside, then west and south.

Head east twice, south, west, south and west again to find the sleeping bear. Play "Truth in Mead" on your lute to reveal the Queen. You will automatically return to town. When the attackers arrive, use your lute to play "Shield of Cosiant" A Worthy Challenger.