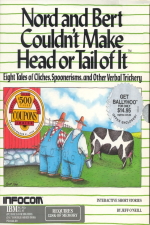 Nord and Bert Couldn't Make Head or Tail of It

Nord and Bert Couldn't Make Head or Tail of It is a classic text adventure game by Infocom. This is a comedy game where idioms and cliches have become real-world objects in the town of Punster. You need to complete 7 separate scenarios before tackling one final challenge.

You need to identify homonyms in this part of the game. While you are walking around the supermarket, a little girl will run into you - she is the worst brat, so type bratwurst, then pick up the sausage.

Starting off in the dessert aisle, type mousse (moose) and pie (pi). Go to the British aisle and identify pudding (putting) and aunts (ants). If you already have the sausage, give it to the aunts now - if you don't, give it to them later on. Go to the meets aisle and find mince (mints) and steak (stake), then pick up a mint and the stake. Head to the write aisle. Here you will find claws (clause), quarts (quartz), stationery (stationary), flower (flour) and then cent (scent). Pick up the cent.

Next go to misc aisle and find muscles (mussels), tax (tacks) and sale (sail). Get the sail and the tax. Go to manicotti aisle and give a mint to the man, then kill him with the stake. Return to the write aisle and push the quarts to reveal a door. Identify lox (locks), then get the lox. Try to open the door, then identify jam (jamb) and try again. Now go through the door and type seller (cellar). Put the lox on sale and buy the lox.

Now go outside, then out again into "All Whiteness and Cold". Wear the sleeves to protect yourself from the cold, but it will now be nipping at your nose. Identify Jack Frost, and the storm will stop. Now you will be near a pond, with an old man refusing to communicate. Remove the jacket, then turn the crank to make Jack be nimble. Close the lid again, then enter the frozen pond. Flip the switch to drill a hole in the ice, then examine the mermaid you have revealed. Turn the faucet to share the Jacuzzi with the mermaid, then pull the plug again. Finally, pull the metal and cut the line with the knife.

Teach the old dog new tricks, then get the stone he brings you. Go the field and make a mountain out of a molehill, then kill two birds with one stone and find a needle in a haystick. Next head to the stable and examine the horse. Now you can look a gift horse in the mouth, then lead a horse to water and make him drink. Go out to the barnyard and grab the ear and the tail. Hit the broad side of the barn, and make a silk purse out of a sow's ear. Open the purse to find a pretty penny.

Head to the road and put the cart before the horse, then ride the cart into market. Upset the apple cart, then pick a peck of pickled peppers and buy a pig in a poke. Get the bag and you will hear it meow - remember this for later. Ride the wooden cart back to the farm.

When you arrive you will see a donkey head toward the stable. Get out of the cart and go to the stable, so you can pin the tail on the donkey. Next go to the barn and the dog will knock over some milk. Don't cry over the spilt milk, then let the cat out of the bag. Go up into the loft and get the hammer, then put your nose to the grindstone. Go down and to the barnyard, and hammer swords into plowshares. Finally go to the stable and sow your wild oats.

Vent your spleen on the waitress, then take the hatchet you are given. Examine the waitress. Pull the wool over her eyes, get her dander up and knock the ship off her shoulder. Take the humble pie and the "collective of lions" she brings you. Now turn tables on the waitress, then take umbrage with her. Grab the fortune cookie and salt shaker. Also take the tablecloth, then give short shrift to the waitress and take the bird. Give the waitress the evil eye, then look at her with jaundiced eye. Get the napkin and roast you are given. Now eat humble pie and swallow your pride. Eat crow, then get down to the nitty gritty. Turn the other cheek and wave the white flag. Shake the shaker to get a grain of salt, then break the fortune cookie and take advice with a grain of salt.

Enter the kitchen. Wipe the blood with the cape, then wave the cape. Now get the cook's goat and cook his goose. Make laughing stock out of the cook and you will be thrown into the frying pan. Jump from the frying pan into the fire. Next leave the cook to his own devices. Pick up the hatchet again, then grind the ax and gore the ox.

Start by saying "Who's there", then "Bob who". Shake Bob's hand, then head into the kitchen and get all. Get the match from your coat. Return to the living room - light the match and put it in Bob's shoe. Take the shade and wear it. Now examine the sponge, selecting Bob. Give Bob a frontal lobotomy with the scalpel. Wear the gloves, take the cord and shake hands again. Blow up the bottle, and when Bob asks "What's this fly doing in my soup", respond by saying "Backstroke" immediately or you won't be able to complete the scene. Put the bottle under the cushion while Bob is in the kitchen.

Visit the Manor of Speaking

Go to the doldrums and get the clock, then head to the pharmacy. Get the box. Open the cabinet and take the bottle. Wind the clock, put the clock in the box and close the box. Now go to the Kremlin with your "time bomb". Drop the box and open it. Head to Interior Decorated and put the bottle on the mantelpiece - answer "yes", then "chair". Get the chair and go back to the Kremlin. Drop the chair, get the clock and get on the chair. Unlock the safe with the key, then open the safe and get the revolution. Get off the chair again and go to the attic. Revolve the attic.

This part of the game involves "spoonerisms" - for example the title of the section equates to "Take a Shower". Examine the head louse. Dine on the shore, then look at the pretty girl and the can of peas. Take off your shoes, then get all and feed the rocks. Look at the red fox, then note the hair raising experience. Look at the dear old queen and the loving shepherd. Read between the lines, then follow your shepherd (as instructed).

Get the rabbit from the hat. Riddle while foam burns, then examine the well oiled bicycle. Get all and wear the hat, then head to the stock room. Make small talk with the sold elf, then talk to your old self. Clean the giant, then climb the stalk. Look at the square meal and the crushing blow, then drop all and climb the bean stalk again. Remove the hat and give it to the giant, then type "lead house". Look at the bed sheets, then tie them together so you can climb down. Show yourself to another seat, then get all and give the crushing blow to the giant.

Type "pretty girl", then give her the square meal, and type "gritty pearl" again and get all. Return to the stock room and get on the bicycle. Go to the clearing, get off the bike and unlock the door with the shiny key.

Read the paper, then type "possession is nine tenths of the law" to get the horn. Beat around the bush to get a ticket stub (examine it to see it is a blessing). Try to go inside, but you can't take the blessing, so drop it here. Now go inside and try to take the beer, then take the beer under false pretenses. Type "ajar", then go upstairs. Get the comb, then search the closet with a fine tooth comb. Get the skeleton and give the skeleton the deep six.

Examine the lame duck and the Mayor will appear. Toot your own horn, then throw the baby out with the bath. Pick up the linen and the disguise (which was under the linen), then go down and outside. Air the dirty laundry and put the blessing in disguise. Go inside and bless the Mayor, then give the decree to the Mayor. Finally go outside, get a laurel and rest on your laurels.