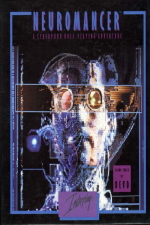 Neuromancer is a cyberpunk adventure with roleplaying elements based on the William Gibson novel by the same name. You play as Case, a computer hacker who is broke and must use his hacking skills and contacts to gradually upgrade his implants and skills to overcome a powerful online AI.

Press P to access the PAX machine and enter the correct copy protection code. Press 2 to access the bank, then D to download $2000. While you are here, read all the messages on the bulletin board. Exit the PAX, then give Ratz $46 from your inventory. Now you can leave without being fined.

Outside, go east twice and south, then enter the door to the east. Talk to Shin and say you don't have the money, but he will give you the deck anyway. Go back outside and drop your pawn ticket if you still have it.

Go north and west, and you will automatically get your caviar. Head back outside.

Head east 3 times, then south. Edo will offer to trade your caviar for Comlink 2.0. Accept this, then go back outside again.

Use Comlink 6.0 with login HOSAKACORP and password FUNGEKI. Upload Comlink 6.0 to receive $7500. Now look at their new employee list. Select any entry and edit it to show your name (as entered when you started the game) and BAMA ID 056306118 (these details can be retrieved from any PAX terminal's banking screen). Leave the building.

Walk east 6 times, then talk to the security robot and say you work for HOSAKA. Continue east, north and east. You will automatically receive $10000 for being an employee. Return outside.

Go south and west. Talk to Shiva here, and say you are here about the CHIP, and she will give you a Cryptology chip for free. Operate it in your inventory to add it to your list of skills. Talk to her about a PASS and you will get a pass to the Matrix Restaurant. Return outside.

Go south and east. Talk to Julius about CHIP, then buy and operate the Phenomenology and Philosophy chips. Go back outside.

Walk north twice, east twice and north. Talk to Finn about warez, then ask him about CHIP. Buy and operate the ICE Breaking and Debug chips. Now ask him about JOYSTICK, then buy it before leaving.

Head east and north 3 times. Talk to Nolan about the One True Computer Game, then say 20 years is too long, then ask what happens if you bring the Holy Joystick. Give him your joystick and you will get the Zen and Sophistry chips. Operate them both. Return outside.

Go south twice, east and south. Talk to Emperor Norton about chips, then buy and operate a Logic chip. Ask him about UPGRADE, then buy an upgrade Debug to level 4. Leave the restaurant.

Go west, north and east. Talk to Asano, asking about Crazy Edo, saying you notice he doesn't like him, then calling Edo a gnat's eyeball. Now buy a Cyberspace VII, and discard your UXB. Leave the shop.

Walk west, south and west 4 times. Use Comlink 6.0 (with your new Cyberspace deck) with link code KEISATSU and password SUPERTAC. Edit any warrant, entering the name LARRY MOE and BAMA ID 062788138, then exit the system. Leave the hotel.

Head north 3 times and go through to the back room. Talk to Lupus and ask him about PASS, then buy the security pass from him. Leave the back room and leave the store.

Head south twice, then east 6 times. Talk to the security robot and say you work for HOSAKA again. Continue east and south. Give your security pass to the computer here, then when it asks for a construct number enter 0467839, and you will receive the Dixie Flatline ROM. Head outside.

Head east and use Comlink 6.0 with link code LOSER and password LOSER. Open the software library and download Hammer 1.0, then exit and go back outside.

Go west 8 times. Use Comlink 6.0 to enter cyberspace. Go to coordinates 224, 112 (Panther Moderns), then attack the database. Press S and select your ICE Breaking skill to make your attacks more effective. Now press I and use Decoder 1.0, BlowTorch 1.0 and Hammer 1.0 repeatedly. Once you are in, download Cyberspace 1.0, ThunderHead 1.0, BlowTorch 3.0 and Decoder 2.0, then exit cyberspace. Delete any outdated software and use Dixie Flatline to debug any damaged software (repeat these two steps now after any AI battle).

Use Cyberspace 1.0 to enter cyberspace (since it is free). Go to coordinates 224, 112 (Panther Moderns), and attack the same database again. Once in, download several more copies of ThunderHead 1.0, since it disappears whenever you use it. Leave cyberspace and head outside.

Go south and west. Enter cyberspace and go to coordinates 416, 64 (Gentleman Loser). Attack the database first with ThunderHead 1.0 then others. Once in, download Slow 1.0, Drill 1.0 and several copies of Injector 1.0.

Exit cyberspace and recover, then head back in and go to coordinates 272, 64 (Internal Revenue Service). Attack this database first with Slow 1.0, then a virus (either ThunderHead 1.0 or Injector 1.0) then any of your ICE breakers repeatedly. Use another virus once the first runs out. Repeat this basic tactic for all battles from now on. In this database, get Jammies 1.0 and Hammer 2.0. You can delete Hammer 1.0 when you get the chance.

Go north, then east 6 times. Talk to the security robot and say you work for HOSAKA again. Go east twice more. Enter cyberspace and attack the database at 144, 160 (Hosaka). Download Hammer 4.0, Slow 2.0, Concrete 1.0 and a few copies of Injector 2.0. You can delete Slow 1.0 and Hammer 2.0 when you get the chance. Leave the building.

Head west 7 times, south 3 times and west into the spaceport. Buy a ticket to Freeside.

Go south out of the spaceport, then head east and north. Tell the secretary you want to open an account and that you do really have money, then continue north to the manager's office. Make sure you have at least 5 slots free in your deck, then enter cyberspace and attack the database at 464, 160 (Screaming Fist). Use Slow 2.0 and Injector 2.0, then attack with whatever you can. Once in, download Slow 3.0, DepthCharge 3.0, Python 3.0 (another virus), ArmorAll 1.0 and EasyRider 1.0. You can delete Slow 2.0 when you get the chance. After logging out, use the EasyRider 1.0 program and you can then access all of cyberspace from any jack.

Enter cyberspace and attack the database at 432, 240 (Turing Registry). Start with Slow 3.0 and Python 3.0, then use your ICE breakers. When you are damaged, use ArmorAll 1.0 to restore yourself. Once you are in, upgrade your skills (Phenomenology level 5, Philosophy level 5, Sophistry level 5, Logic level 5).

Your next target is a database at 96, 32 (Psychologist). Defeat this one easily, and you will meet Chrome. Use your Philosophy skill to defeat this AI.

Now go to another database at 160, 80 (World Chess). Defeat this one to meet Morphy, which you can beat with your Logic skill.

Next go to the database at 352, 112 (Citizens for a Free Matrix). Defeat this base to meet Sapphire. Use Sophistry followed by any other skill to defeat her.

Head to coordinates 448, 32 (NASA) and defeat the database to meet Hal. Attack him with Logic and any other skill. After this fight, download BlowTorch 4.0 and Decoder 4.0, then delete your copies of BlowTorch 3.0 and Decoder 2.0.

Now go to 288, 208 (Free Sex Union) and attack the database, probably using a virus on this one because it is a bit tougher. After meeting Xaviera, attack her with Phenomenology and any other skills.

Next go to 336, 160 (Bank of Berne) and defeat the database to meet Gold. Attack this AI with Philosophy and Logic. Read the messages in this server, then use the funds transfer function. Enter 121519831200 as the source account, LYMA1211MARZ as the source authorisation code, 500000 as the transfer amount, BOZOBANK as the destination bank link code, and 712345450134 as the destination account number. Leave cyberspace.

Use Comlink 6.0 with link code BOZOBANK, and use Sequencer 1.0 on the first screen. Download $500000 from your account, and you will never worry about money again.

Back in cyberspace again, head to coordinates 336, 240 (DARPO) and defeat the database. Download Concrete 2.0, Drill 3.0, Jammies 2.0, and several copies of ThunderHead 3.0 and Injector 3.0. Delete any older programs.

Go south twice, west, and north into the spaceport. Buy a ticket back to Chiba City.

Exit the spaceport to the east, then go north 3 times and west. Enter cyberspace and go to 112, 480 (Maas Biolabs). Defeat the database, then attack Sangfroid, using Phenomenology and Logic. Once logged in, access the security systems to turn off the Lawbot alarm, and unlock the main entrance. Exit cyberspace and go outside.

Go south twice and east. Ask Julius about HARDWARE and buy a gas mask, then operate it to wear it. Go back outside.

Go west into the lab, and tell the computer to implant Cybereyes. Leave again.

Go north twice and west into the hotel. Use your Cybereyes to enter cyberspace (these give you 32 slots, as opposed to the 25 in your previous deck). Attack any of the last few databases to stock up on strong viruses (Python 5.0 seems to be the best).

Now go to 384, 416 (Tessier-Ashpool) and defeat the database, then defeat Wintermute using Sophistry and Logic. Next head to the database at 160, 80 (World Chess), and download BattleChess 4.0. Go to 320, 464 (Phantom) and attack the database. When you meet Phantom, don't attack him but instead use the BattleChess 4.0 program to get past without a fight. Once inside, download Hemlock 1.0.

Next go to 208, 208 (Musabori Industries). Attack the database, then you will meet Greystoke. Use Hemlock 1.0 to defeat him, then download Kuang Eleven 1.0.