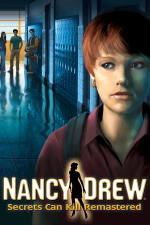 Nancy Drew: Secrets Can Kill Remastered is a remake of the first game in a long-running series of detective games, Nancy Drew: Secrets Can Kill. In this game, Nancy is staying with her Aunt Louise in Florida, when a student at the local high school is murdered, and Nancy is asked to investigate, going undercover as a new student. Ths remastered version contains updated graphics and several new puzzles.

Read the letter on the table in the entry hall, which mentions a safe and a combination somewhere within the house. Open the drawer in the right of this table and read the invitation - look at the symbols across the top of this carefully, as they form the code for the safe. Next, turn left and enter the sitting room. Look at the red books in the right of the bookcase, and open one to find a teacher's lounge key to take. Look at the drawer to the right of the sofa and read the note about Jake working at the library.

Go back to the entry hall and look at the large tapestry on the wall to reveal the safe. Enter the code from the top of the invitation to open the safe. Take the library key from inside the safe. Look at the puzzle box and solve the sliding puzzle to get the login details for the computer at the high school. Now you can leave the house.

Talk to Daryl, and note the menu behind him with red letters indicate "soup ladle". Turn left and talk to Beech, then go through the door to the kitchen. Pick up the soup ladle from the black tray near the spill sign. Look down near the left side of the stove. Take the bolt cutters and you will hear gas starting to leak - quickly put the soup ladle in its place to avoid an explosion.

Go in through the main school entrance, and walk around the halls of the high school, looking at the bulletin boards to get lots of helpful hints. Talk to Hal Tanaka in the study hall, Connie Watson in the student union area, and Hulk Sanchez near the gym. Make sure you look at the judo poster near Hulk in the gym. Keep going back and forward between these 3 students to learn as much as you can about each of them, and how they all knew Jake Rogers.

Next find the library, and use the silver key from the safe to unlock the door.

In the library, read all the books you can find, both downstairs and upstairs; the most important ones to look at carefully are:

Leave the library and find Jake's locker, which is sealed with yellow police tape. Open it with combination 5253 ("Jake" as spelled on a phone). Look at the empty VCR tape container, book and magazine, and look down to read a newspaper article.

Outside the library, look at the bulletin boards and read a mirrored message "grape grape orange cool will play the alarm in the school". Go back to the area outside the gym and press these four buttons to set off the school alarm - Hulk suggests you get Connie. Go and talk to Connie, who will leave to investigate. Look at her notebook, then turn around and use your gold key to get into the teacher's lounge.

Go back and talk to Hal, Hulk and Connie again, then leave the school.

Talk to Daryl about everything, and he should give you a note. If it doesn't appear for you automatically, look at the counter near the menus to see it. Head back to the school.

Find the corridor with the student union and go to the door at the other end. On the keypad, type the code "NOTE" in Braille (the code was from the Teacher's Lounge computer, and you can find the correct Braille letters from the encyclopedia in the library). Once inside, press the button on the wall to go down in the elevator.

This next part has a time limit, so move quickly. Read the emergency instructions on the wall, then look in the toolbox on the floor and take the gloves. Now look at the boiler. Cut the chain with your bolt cutters. Use the gloves on the levers, and move them in this order: left, left, right, right, left. Take the box of matches from on the crate, then pick up the video cassette from in front of the vent. Exit through the vent.

Go into the sitting room and open the upper cabinet to find the television. Turn on the television, then put in the video tape to see evidence about all of the students.

Talk to Hulk and Connie about the video, then head to the Diner.

Talk to Daryl about the video. Talk to Beech about everything - he wants Jake's journal.

Go back into the library again. Go to the right on the ground floor and look in the thin drawers. Read a note half hidden under a map, that says to search under Jake's combination in the catalog. Go to the computers in the back of this area and search for 5253 to see a book called "Under My Seat". Go upstairs to the study area and find the seat beneath the periodic table on the wall. Look under it and take the puzzle box. To open this, you must start with the symbol you saw on the box of matches in the boiler room. Then you have to use the clues that have been scattered around on all the secret messages throughout the school, collected here (and sorted by order in the periodic table):

Start with the known symbol, then press the one that is "up two" from here, then "right one", "left three" and so on following the instructions above. Take the video cassette from in the box.

Go into the sitting room and watch the new video cassette on the television. Take it out and turn off the television again, then go out to the entry hall. Talk to Beech, and say that the tape is behind the tapestry. Tell him an incorrect combination, and he will be caught.