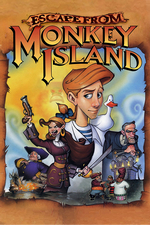 Escape from Monkey Island is the fourth in a series of classic point-and-click comedy adventures by LucasArts. This game continues after The Curse of Monkey Island. After returning to Melee Island after their honeymoon, Guybrush and Elaine find the island in disarray, and must investigate how things have gone so horribly wrong and try to return the island to normal. The series continues with an episodic adventure, Tales of Monkey Island.

After the introduction, you are tied to a pole. Kick over the brazier of hot coals, then pick them up and kick them to the loaded cannon on the right of the screen. Throughout the rest of the game, make sure you talk to everyone about everything - this is crucial to completing the game.

Act 1: Things to do on Melee Island When You're Dead

After you return to Melee Island and watch the cutscene, head into town. Go into the voodoo emporium and talk to the voodoo lady (by pulling the index finger on the hand table). Now head back outside and go south to the Scumm bar. Get the dart players to pierce the balloon, then take the pretzels. Also talk to I Cheese and beat him at a game of insult arm-wrestling to get him to join your crew. Talk to Otis and Carla and convince them to join you as well.

Now head to the harbor and get the popped inner tube. Try to get a boat from the harbor mistress but you need the proper authority. Go back to the mansion and put it on the cactus, then give a pretzel to the catapult operator. While he is gone, tinker with the controls. Now you can go inside the mansion. Get the 2 government documents and get Elaine to sign the "cushy" one. Also make sure you get the gubernatorial symbol from her. Go back and give the cushy job document to Otis and Carla. Finally show the gubernatorial symbol to the harbor mistress and you will be on your way.

Go to the law office and read the letter you receive. Now go to the bank and ask for safe deposit box. After the cutscene, grab the hanky, sword and three sponges, as well as the music box and grog from the deposit box. Use the sword to break the bottom hinge on the door, then put the broken sword in the crack. Put all three sponges into the crack (smallest first) then pour on some grog to break open the door. Now you need to prove your innocence.

Get an empty spritzer bottle and the cologne from the stand at Scents and Sensibilities. Get some wood shavings from the House of Sticks, then head to the Bait Shoppe. Talk to the shop owner, then get some free bait, and the duck from outside the shop. Now go to the Palace of Prostheses and talk to Dave. Show him the hanky; you need to get a stronger version of the same smell.

Fill your empty spritzer bottle at the fountain, and add the wood shavings. Go back to the Bait Shoppe and gill it with some bait water. Now go out of town to the mansion and pick the flower; add this to the bottle. Finally go to the marsh and get some water from the puddle on the ground. Go back to Dave and spray him with your concoction. He will tell you the name you are looking for. Use the filing system to get the appropriate medical record - you need to enter the appropriate 3 initials, using this key:

Before you leave, ask Dave about a prosthetic hand. Play your music box, then quickly steal it while he can't hear you. Outside, find the chess players, and get them into an argument so you can take their clock. Go back to the marsh and use the clock on the raft. Now follow the directions as indicated by the time on the clock and the medical record. You will run into yourself from the future - just note exactly what he says and does, then open the gate and continue. Mimic those actions when you run into yourself again.

At the shack, listen at the window, then use the grease on the welcome mat and throw the duck through the window. After Pete is captured, use your broken sword on the manhole outside the bank, then take the cover. Look at it to discover three names, then visit Dave again. Ask for some free stuff, and mention the three names from the manhole cover to get some skin. Go back and use this on the manhole, then bounce off it into the bank. Climb down the ladder and use the pull chain, then climb back up and look at the strange shadow to find a prosthetic nose.

Take the scupperware and put your bait inside it, then leave the bank. Go to the Bait Shoppe and get some termites on your prosthetic hand. Go to the mansion and spray some cologne on one of the animals to make Mandrill break his walking stick. Go to the stick shop and use the termites on his stick, then go to his mansion again. Tell Mandrill that you know about the loot and he will leave - follow him by the trail of sawdust he leaves. Walk around to the back of the island to find a secret passage. Go down and push the button, then climb back up. Dive into the deep water and open the scupperware to catch a glowing fish - you can now see a secret door. Go through and grab the loot and the screw. Head back to the jail and show both to the inspector.

Go to the voodoo lady and talk to her about heirlooms - you will get earrings, a necklace and a pen. Now get the paintbrush from Meathook's, and a can of grog from the harbor. Go to the Lua Bar, sit on the stool and order a flaming scuttlefish. When it is beneath the painting, use the paintbrush in the sushi boat propulsion mechanism; then when the chef runs out, enter the kitchen and pour the grog into the steam generator. Get that painting. Now go back to the harbor and use the earrings, necklace, pen and painting on the headpiece.

At Starbuccaneer's Coffee, look at the coffee cup from the outside, then go inside and take it. Get a free refill, and start eating a free sample bagel (take the leftovers). Finally, steal the mug from the lady, then leave. Go to Stan's and take the free pamphlet and glue. Drink the coffee, then listen to his sales pitch to get a monkey meal coupon. Go to the micro-groggery and get a free grog. If you want another coupon, put the glue on the manatee and ride it. Now head over to Planet Threepwood. Make sure you talk to the map at the statue about the missing hat. Get the artist to draw a picture of you with the mug. Use the glue on the caricature, then the caricature on the Starbuccaneers mug. Swap the mugs.

Go back to the docks and get on the rowboat - go to Knuttin' Atoll. Talk to the puppeteer, then show him the painting of the Ultimate Insult and take the puppets. Go to school and be the worst student (so you get a dunce hat). Outside, pull the fire alarm, then go back inside and take the whistle from the box. Repeat this to get the boat, magazine and gaming card. Now head to the beach and talk to the pirate. Head east to the rocky beach and blow the whistle to call the parrots. Give the grog to one of them, then keep asking questions to find out where the hat is. Pull out the two puppets and start a conversation to reveal the hat.

Now go back to Jamalaya island and head to the diving platform. Talk to Marco de Pollo, then get authorisation from the judges, before challenging de Pollo to a contest. You will lose. Talk to the judges about why you lost. Show the pamphlet to the grouchy judge, and find out the moves from the hippie judge. Use the bagel chunk on de Pollo's lotion, then challenge again. Use the dunce cap before you dive, and match de Pollo's moves - you should win and get the trophy.

Read the note, then go to the clearing and talk to Herman. Get the coconut and the other note, then hit Herman with the coconut and talk to him again. Go to the canyon and get the banana picker, then head back to the beach and get all the bananas. Give one to Timmy, and get him to follow you to the canyon. Give him another to enter the mine and continue until you reach a steel door. Open the vent, throw a banana inside, then close it. Throw another into the portal and the door will open. Go inside and use the banana picker to get the weed whipper.

Now go to the vista point. Throw a rock into the right hole. When this shakes the branch, throw another into the middle hole. On the next two shakes, throw rocks into the left hole - if the timing is right, a boulder will shoot out the bottom into some lava. Try again until this works. Go to the Church of LeChuck, and use the banana picker to get the shields from above the door. Talk to the priest, and get him to let you ride on the lava river. Steer the ride towards the boulder you sent here before, and use the weed whipper on the weeds. Kick the tree over and go back to the church for another ride. This time aim for the bottle and use the banana picker to get it. Go back to the beach and hit Herman with the bottle, then talk to him again.

Go to the village and talk to Jojo Jr about Monkey Kombat. Look at the musical monkey, then your two shields. Give the cymbals to the monkey and get the accordian. Now hit Herman with the accordian and talk to him once more to get another gubernatorial symbol. Now start fighting the monkeys in the jungle. You need to gradually learn the commands to change positions and which insults beat which other insults (write them down). Beat the monkeys in this order: timid, smelly, strapping and brawny. Then challenge Jojo Jr and beat him to win the bronze hat. Go to the giant monkey head and use the bronze hat on the head. Use the banana picker on the nose and go inside. Find a slot and use the gubernatorial symbol on it.

Head right and pick up the large plank. Put it on the small tower, then climb this tower. Jump on the plank to reach the large tower. Now flip the switch. In the Ultimate Monkey Kombat, you need to draw 3 times to win.