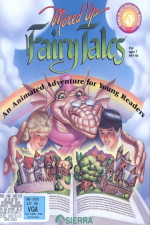 Mixed-Up Fairy Tales is a game for younger players by Sierra On-Line. The aim of the game is to fix a series of classic fairy tales that have become corrupted, largely by returning objects to their correct owners.

From Bookwyrm's house, go north, west and north. Talk to the girl, then select Cinderella from your book. The fairy godmother arrives and needs you to find a pumpkin. Go south and west to leave town, then explore the screens to the west until you find the pumpkin. Return it to the fairy godmother, then go west and you will see Bookend steal the slipper. Follow him and pick up the slipper when he drops it, then return it to Prince Charming.

Beauty and the Beast

Now head west and south, talk to the woman and select Beauty and the Beast from your book. Go east twice then leave town to the south. Continue south twice and east to find her father. Talk to him, then enter the maze. Go around the edge of the maze and take the rose, then leave again. After the Beast talks to you, go west and north twice. Talk to Beauty until she asks for your help, then click on yourself and you will escort her to the Beast.

Jack and the Beanstalk

From outside the gates, go west, north 4 times and east. Talk to the boy, then select Jack and the Beanstalk from your book. Head west, south and east out of town, then go south and talk to Bookwyrm. Now wander around until you find the magic beans. Return to Jack and he will plant the beans and climb up. From here go west, south, east twice and north. Talk to Jack then click on yourself as well. Wander around to find the axe, then go back and give it to Jack.

Wander around and you will find Snow White lost in the forest. Select Snow White from your book. Escort her to the Dwarves' house at the far southwest. After walking away, go west and north twice to see Snow White is asleep. Go south then east twice, then talk to Prince Silver and click on yourself to offer to help. Untie him, then return west twice and north to Snow White.

Talk to Bookwyrm, then click on yourself to offer to help. Go to Bookend's cave at the far southeast and you will complete the game.