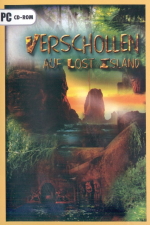 Missing on Lost Island is a German third-person adventure game with English subtitles. Walking home one night, Tim and Diana see a couple of pirates who attack them with laser guns and they are transported to a different time period. Tim must explore his surroundings and find Diana before returning home.

Go outside and get the clothes from the line, then pick up the ladder. Return to the crater and pick up the stick next to the tree. Use the ladder to climb down into the crater. Talk to the sculptor, then exit through the passage. Walk right past the house and into the village.

Look at the cat, then enter the tavern. Talk to the barkeeper and the drunk, then head upstairs and talk to the pirates. Next go outside and enter the blacksmith's. Talk to the blacksmith, then take the sledge hammer on your way out. Go right to the harbor. Talk to the pirate, then walk onto the ship (you will sneak around behind). Steal the coin from the pirate as he is flipping it in the air. Return to the tavern and offer the gold coin to the drunk, but he wants more. Go back to the harbor and hit the pirate with the stick to get his gold tooth. Give this to the drunk, then buy a drink from the barkeeper with the gold coin - the drunk will pass out. Search him to find an ivory statue. Talk to the bartender to get a coffee, and use this on the drunk.

Return to the tavern. Give the statue to the drunk and talk to him. Go upstairs and talk to the pirates, who ask you to prove yourself worthy to join their crew, by hitting a fly with a cannonball, swashbuckling some candles, and drinking them under the table.

Leave the tavern and enter the blacksmith's. Talk to the blacksmith, who will forge you a sword if you provide the steel. Give him your cannonball. Walk outside and back in, and get your sword from the right. Use it on the candles you are holding. Now return to the pirates upstairs in the tavern. Go outside to the stage and use the sledgehammer to free the cannonball, then pick it up. Go back inside and give the cannonball to the pirates. While they are distracted, switch your severed candles for the ones on the table. Now use your sword on them and you will join the crew.

Pick up the footbridge (plank), then go left to the lower deck. Open the barrel, then pick up some gunpowder. Also take a cannonball while you are here. Now climb up to the main deck, then go straight to the upper deck and talk to the captain. Steal the spyglass from his pocket, then climb up to the crow's nest. Use the spyglass on the sea to see an approaching ship. Climb down and tell the captain, then go down to the lower decks again.

Collect the cleaning brush and the wig (wick) from the right side of the screen, thenpull the opening rope over on the left. Look at the barrel of the first cannon on the left, then use the wig on it and use the cannon. What happens next depends on whether you win the game of Battleship or not.

After you hit the enemy boat 8 times, your crew will board it and then disappear. Go up to the deck and board the other ship using your footbridge. You will end up on the other boat's deck.

After you run out of ammo, you will jump out of the portal and grab on to a piece of wreckage, before floating over to the enemy boat. Try to exit to the ship, but you can't make it. Go back to the wreckage and get the rope from the mast. Now return to the enemy boat and use the rope to get on board. To escape from jail, use your scarf on the door. Go up to the deck.

Go towards the captain's cabin and get the rope and the rope-fixing pin. Return to the main deck and look at the wolf-head man. Use the pin on him and take his iron rod. Look at the boat, then go down to the store on the left. Take the oar. Look at the chain and break it with your iron rod. Move the big crate out of the way, then press the secret button. Take the laser from the shelf, then head back up to the deck. Use the oar on the boat - you need provisions first. Go the rear deck and use your rope on the railing.

Use the scarf on the door to get out of jail, then look down into the cellar, which is dark and scary. Go up to the deck, and to the rear deck again. This time, use the laser on the leftmost lamp. Go back to the upper deck, and down to the prison. Use the lamp on the cellar, then use the lamp again, then enter the cellar. Get the wooden prism from under the keg. Look at the barrel and the crate, both which are closed. Use the prism on the exit to prison, then climb up. Get the hook from the wall, then climb back down again. Use the hook on the crate and get an empty sack. Use the hook on the barrel and look in it to see water. Use the sack on the barrel to get some water. Now climb up and return to the boat. Use the oar on it to exit.

On the island, walk to the right to find a waterfall. Cross the bridge to the cliff, where you should pick up the wooden stick and climb the rope. Look at the extra rope up here - you need something to cut it with. Continue right and look down into the river to see something sparkly. Continue right to find some dead pirates. Take the knife, hook hand and braces from them.

Return to the bridge over the river and use the braces on the railing to get a propeller. Continue left and use the knife to get some extra rope. Climb down the rope and go right at the bottom to reach the river. Pick up the twig, then use the knife on the closest tree to get some bark. Go back to the left and continue to reach the waterfall. Combine the hook and rope together, and use them on the waterfall, then push the barrel out of the way. Use the knife to open the crate, then use the scarf on the crate before picking it up. Also make sure you get the rope from the right side of the screen, then exit the waterfall.

Go right to the cliff, then left to the riverback. Click on the river to catch a beaver (you must have the crate, stick, rope and bark). Take the rope and stick, then click on the crate to get the beaver. Return to the cliff, then to the river. Use the beaver on the tree to make a raft, and bind it together with the rope. Now combine the knife and the long stick to make a lance, and use this on the raft. Use the propeller on the barrel, then go forward and you are attack by an octopus. After you escape, enter the tunnel over to the left.

All instructions for these tunnels are relative to your orientation when you enter a screen. Start by going forward, right, forward, right and forward again, then climb up into the gap. Take the gear wheel form from the statue, then use the switch. Go back down into the tunnel and go backward, then forward twice. Your hands will start burning, so use the shirt on yourself, then go forward twice more into the lava room. Take the strange thing from the table, then use the switch. Go back into the tunnel.

Use the scarf and gunpowder on the statue on the left, then light it with the strange sparky thing. Now press the button on the wall, use both gears in the empty slots, and use the chain on the gears. Pull the switch to help your crew escape. Go back through the passage and jump into the water below.

Use the torch on the right to help set yourself free. Take the rope from the wall. You now have 2 possible paths to follow (both end up at the same place).

Use the rope on the well and climb down. Try to enter any of the tunnels, then when you finally reach the end of one, try to open the grate. Use your shoes to kick it open. Run to the nearest barrel, then the next one, and finally the crate. Next sneak over to the platform, pick up the welding machine, and enter the spaceship. Take the metal stand and the cable near the door, and combine these two objects. Open the box and get the time travel amulet from within. Open the door at the back of the room and go through. Use the computer on the left twice, and the one in the middle once. Now try to leave this room, and the spaceship will be raised. Leave the spaceship and go to the prison.

Get some wood from the beam and combine this with the rope. Look through the door at the top of the stairs, then use the rope and wood on it. You will eat the banana and the guard will slip on it. Look at him to see he is dead. Climb the stairs and free the chain fixing point, then climb the chandelier to see that the wolf-men are fake. Go back to the dead guard and steal his equipment. Head back up the stairs and through the archway. Talk to the guard and steal his card. Use the card on the wall, then enter the doorway to find Diana.

Enter the previous room and use the chandelier to escape. Go to the spaceship and enter it. Open the door at the back of the room and go through. Use the computer on the left twice, and the one in the middle once. Grab the chair, then go back into the entrance hall and open the box to the right of the doorway, then get the time travel amulet from inside. Try to use the card on the reader on the wall, but it doesn't work. Get the cable near the door, then use the chair on the card reader. Get the metal stand and combine it with the cable. Try to leave the spaceship - talk to Diana and she will help open the door. Head towards the prison to enter the large hall with a guard in the background.

Talk to Diana twice, and she will lure the guard out. Head out towards the basin, and push the middle state on the right side of the screen. Enter the cave and continue through to the opening. Use the cable and stand on the opening in the ceiling, then climb the cable. Push the platform into the hole, then get Diana up by using the crank on the tree. Head right to the bridge.

There are now 4 possible endings depending on what you do from this point.

Talk to Diana, then when you are surrounded, try to fight the guards on the left. You are left alone, stranded on the island.

Cross the river using the bridge. You are surrounded and use the time amulet, and are eventually eaten by a dinosaur.