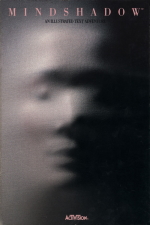 Mindshadow is a classic text adventure with graphical elements from Interplay. You wake up on a beach with no memories, and must explore your surroundings to try to regain a list to your past.

Head north and enter the hut. Take some straw, then exit the hut and go east. Take some steel and continue east, then take a vine. Return west twice and south, and drop the steel and straw. Now go east to find a cliff. Tie your vine to a rock and go down, then enter the cave. Get the rock, then dig in the sand and take the map. Read the map, then exit the cave by going east, and head up, west and north.

From the hut, go north twice, east, north, east twice, south twice and east. Look in the trunk and take the bottle. Return to the hut by going west, north twice, west twice, south, west and south twice. Go south again. Drop your map and pick up the steel and shell. Bang the rock with the steel. When the captain arrives, give him your bottle.

Go north and west, then talk to the surgeon. Walk south and fight the man, then continue south and take the cleaver. Now head north twice, east, south 3 times and west. Cut the chain with your cleaver, then go east, north twice and east twice.

Walk east 3 times and south. Search the man and take his hat (and money). Head north, west twice and south. Give the man some money and you will get his pole. Continue north and west and get the debris with the pole. Take the newspaper and read it to see "ARCMAN".

Now head east and north. Give the man some money to hear the password "CHANDRALT". Walk south, east, north and east. Talk to the woman, then give her your hat. Go east. Examine the drink, then follow the man to hear about the "TYCOON". Return south and west and take your hat. Look in the hat to see a message. Kiss the woman, then go west, north and east. Say CHANDRALT, then give the man some money. Head west, south twice, west and north twice to see a plane. Enter the plane.

Go north and west, then to Booth 11. Search the man, then get his card and note (drop the rock and steel if you need to). Read the card to see "BOB MASTERS", and read the note to see "JARED". Now head east twice, north twice, west, up and north.

Go west into your room and then duck. Examine the room, then take the parchment and read it. Head east, south, down, east and south. Continue east 3 times and south, then dig with your shell. Drop the shell, then take the leaflet and read it to see "AN11649". Head north and west 4 times to find the bank. Say AN11649 to get a safety deposit box. Open the box, take the gun, and drop the box. Go east, north, west, up, north 4 times and east. Shoot the man. Drop your gun, then get the message and read it to see "WILLIAM".

Now just type the following commands to finish the game: