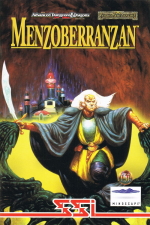 Menzoberranzan is a classic first-person party based roleplaying game set in the Forgotten Realms universe. After a group of Drow attacks your village and takes several of your villagers as hostages, you must travel the land to track them down in the evil city of Menzoberranzan.

You start in the local Inn. Head east to the well, and fill 12 buckets with water. Use a bucket on each point of fire on the Storeroom (southeast). After putting out the fire, go north to the Guardhouse, and get Baldassar to join you. Get the equipment here, then search the town for more stuff. End by going to the Inn and collecting your reward, then leaving town through the Eastern Gate.

Find a gap in the Southern Mountains and get Drizzt to join you, then go North to the cave. Get all the equipment here (don't miss the button in the northeast wall), then go east to Leucrotta's Lair.

You need to find the 4 gems in this cave (you will need to use the Jump spell or Jump potions to get them all). Don't miss the helm of disguise in the south of the cave. Take the gems back to Vermuleans Cottage and get him to alter them. Return to where you found Drizzt and proceed south.

Head southeast and get Vonar to join you. Kill everything in the area and collect all the booty. Save your game before entering the mine entrance to the southeast.

Levels 1 and 2 and the Lake

On the first level, talk to Manahath to get the Descent map, before finding a ladder down to level 2 in the southwest. You need Passweb to get through the northern section to find a ladder back up to level 1. Then a ladder down again is found to the southwest, through a secret wall. Don't miss the pickaxe, which you'll need later. Head north, through a flight area, a secret wall, and a passweb. Talk to Borenorak, then find the lake entrance, in the northwest corner. Fight the Aboleth in the lake, then follow the stepping stones back to level 2. Go south to find the Dwarven Mines.

Head northeast, and use Read Languages to translate the wall message behind the secret door. Fight your way north to reach the Temple of Dumathoin.

Find the silver circle key to the south, then free Valkverdling, and get him to join you. Use the silver circle key to the northeast, and use the teleport. Press the hidden switch on the south wall and get the horn from the northwest. Teleport out, then blow the horn at the middle statue in the southeast room to free the chalice. Head along the southern passage with the holy symbol, horn and chalice, and go down to level 3.

Clear all the rooms, finding the silver axe key and making sure you collect all the gems in the walls (including the diamond). Use the silver axe key and then the silver circle key. Offer the diamond to the fountain, use the chalice for healing and pick up the Axe of Hurling. Clean out the north rooms before heading south to the exit of the temple. After 2 ascents, the lights will go out and Drizzt will be kidnapped (so give his stuff to someone else). Keep ascending until you reach the Myconid caves.

Search the northern area, picking up the Jade Spider, before going into the large cave in the middle of the map. Go southeast to find the Mushroom Men, who will take you to the Myconid King - agree to his quest. Cure Valkverdling with the antidote, then go southwest through the opening provided by the King, and enter the Mouth Cave.

Speak to the Mouth in the wall and accept his quest. After picking up the necklace, go north and west to get lots of good stuff (including Brogonars Stone), before returning with the necklace. Give it to the Mouth, then go southwest to the Caverns of the Drider.

From the entrance, go northeast and go through a teleport. Completely search this area and head northwest to the entrance back to another area of the Myconid Caves. Explore this area, but don't go through the one way wall in the southeast. Return to the Drow caves and go back through the first teleport. Go through each of the other teleports, thoroughly searching each area. Go down to the lower level of the caves, rejoin Vonar, and talk to the Drider who will give you a scroll of Transform to Spider. Leave level 2 via the eastern exit and proceed northwest to the Chasm. Use the scroll provided by the Drider, then head northeast to the Underground River.

After paying the ferryman with the gems, get into the boat. Fight the aerial attackers during the journey, then get out and go to the entrance to Menzoberranzan.

Follow the left passages to find the entrance to the city of Menzoberranzan. To move around the city just click on the location to which you wish to travel.

Go to Galenthas Goods shop and trade the helm. Go to Ssar Tafell's shop and speak to her to get sent on a quest.

Use the teleport to get up to the 2nd level, then speak to the Mage in the southwest room. He will trade the healing box for the items needed to release the Drider spirit from House Baenare. Leave the Tower and return to Ssar Tafell. She will allow you to speak with Vermulean, who will identify the gem of Lolth. Now go to the House Fey Blanch.

Explore the area well, for lots of experience and items. Talk to Gumsznar in the southwest room - he will then turn you into Drow, and send you to see Rizzen Do'urden in Carpathians Tavern. Rizzen will tell you the password and give you a map to House Do'urden. Now go to Gollvelius' Tavern where you must speak with the rouge Jarlaxle.

Jarlaxle will send you to the Mantle caverns to return his Necklace. The northeast cavern contains many nice items to find. Next go to the northwest cavern and locate the necklace in the middle of the cave, behind a secret wall. Explore the rest of the cavern, then return to Jarlaxle. You will have to return to the northeast cavern and kill the Drow in the southwest corner to get the insignias before heading to House Do'urden.

Give the password to the guards to enter the Commoner Area. Get the gold red gem key from a room to the north, then head west. Get the gold green gem key from a southern room, then go through the north door. Find a secret door around her to get the white circle key from a northwest room. Go through the southern door, past the villagers' cell, and unlock the white circle door. Teleport up to the Noble Area (level 1). Go northwest and teleport up to level 2. Go through the secret door in the northwest, and teleport to the southern end of the main corridor. Go southwest through the secret door, kill Rizzen, get the gold black gem key and the helm. Add the Gem of Lolth to the helm of spiders, before teleporting back to the northeast and returning to level 1.

The guards should be gone, so use the black gem key to open the west door. Go to the southwest room and get the gold circle key. Head west to find Drizzt's weapons, then unlock the gold circle door in the northwest. Go through the secret wall to get the gold blue gem key. Open the blue gem door and use the teleport. Kill Matron Do'urden, and free Drizzt and the villagers to end the game.