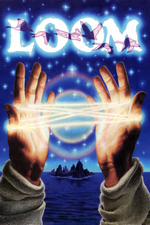 Loom is a classic LucasArts adventure game with the unique game mechanic whereby you play musical sequences on your distaff to affect the world around you - apart from a few exceptions, these musical sequences are different with each game, and their difficulty can be adjusted at the outset of the game. You play as Bobbin Threadbare, an outcast from the Guild of Weavers, who must set out on a grand adventure to save his Guild and eventually the entire world.

West down along the path until you enter the village. Enter the tent on the left, then walk until you see a long cutscene. Pick up the distaff on the right and click on the egg to learn the Open draft (you need to write down the music sequence as these drafts are unique for each time you play the game). Now click on the egg and cast Open by repeating the music sequence you just wrote down. After this you can leave the tent by going to the far left again.

Go up the path and head to the left until you find holes in some trees. Click on each of them to see owls inside 3, but the 4th is empty. Continue left to a graveyard, and click on the thorns at the bottom left to scare a rabbit and awaken the sleeping owl. Look at the grave the owl had been sitting on to see a prophecy. Go back to the right and examine the empty hole to now learn the Light draft.

Head back into the village and enter the middle tent. Walk over to the darkness and cast Light to be able to see everything in the room. Click on the wheel to learn the Straw to Gold/Gold to Straw draft. Cast this on the straw, then go back outside. Enter the tent on the right, and click on the dye pot to learn the Dye/Bleach draft, then on the flask on the table to learn the Empty/Fill draft. Cast Dye on the heap of wool on the floor.

Leave the village again and return to the mountain where you started. Cast Open on the sky, then return towards the village and go to the dock just left of the village. Walk to the end of the dock, then jump into the water and climb on to the boat. Out in the ocean, click on the waterspout to learn the Twist/Untwist draft, then cast Untwist (same sequence as Twist but in reverse order) on it to make it disappear. Continue left on your boat to reach a beach.

Walk towards the forest, then follow the path to your left and learn the Visible/Invisible draft from the shepherds. Walk up along the other path here to reach a green crystal city.

Walk to the right through the doorway, then try to go up the stairs and outside on the next screen, but you will first listen to a conversation. Head up the stairs and around to use the bell in the crystal teleporter here - up the top the 2 men will teleport you straight back down. Go outside through the doorway here and you can see those two men up in their tower - click on them and cast Invisible. Go back inside and use the crystal and you will now be invisible to the men. Click on the scythe to learn the Sharpen/Dull draft, then use the bell on the other side of the room. Click on the sphere to learn the Terror draft.

Head back using the 2 teleporters then go back down to return to the room where you entered the city. Walk up the stairs to the left and through a doorway, then use the crystal over to the right to appear in the foreground, where you will meet Master Goodmold. After the conversation, click on the crystal chalice to learn some more. Go back through the teleporter and doorways to leave the city the way you came in.

Click on the dragon for a conversation, then cast Gold to Straw on the dragon's gold, followed by Sleep on the dragon. Go through the new cave entrance in the back, then walk to the darkness and cast Light. Go down the steps and head through the first doorway. Go to the far right, then in the next room go down the stairs in the middle of the floor. Go forward along a short path and take the left of the two doorways here. Keep walking left and you will fall down to a new area with some water.

Cast Awaken on the boy at the bottom to have a conversation with him and learn his name is Rusty. Cast Reflection on Rusty after he falls asleep again, then walk to the far right. Wait for the door to open, then enter the Forge. Walk around behind the wall here, then go to the far right until you meet Mr Stoke, who locks you in another room. Use the straw to have a sleep.

After the cutscene, pick up your distaff again. Cast Open on the door, then leave this room and go down the steps. Click on Mandible to listen in on the conversation. When Edgewise raises the sword during the conversation, quickly cast Dull on it.

Cast Open on your cell, and Mandible will take your distaff away. Click on the sphere to get rid of Cob, then go outside and talk to Mandible. Pick up your distaff again. Go inside and then back outside again, and you will be pushed through the hole.

Now head to the far left and talk to the swans at the pool. Continue left and go through the last hole.