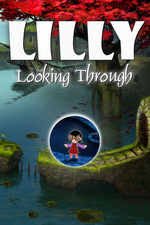 Lilly Looking Through is a surreal adventure that begins with a young girl, Lilly, playing in the forest with her younger brother Row. After he gets caught up in a piece of red fabric and whisked away, she must set off through the forest to find him, armed with a magical set of goggles that allow her to see back in time.

Try to climb up the slope to the left, then try to push the cart. After Row appears, try to take the goggles hanging near him. Pull the plug out of the water barrel, then push it and climb on top to get the goggles. Now as Lilly again, use the band from the broken barrel to repair the cart, and push it so you can climb up the slope. Pick up the cattail reed from the ground and light it with the one that is already on fire, then use this to burn the rope so the ramp slides down. Climb up the ramp and try to take the red scarf. Shake the branch above you twice, then walk over to the right. Use the handles to slide to the nearby hut and pick up Row's hat. Now along the path into the background.

Take off your goggles and use the vine to swing across to the tower. Put your goggles back on and run down to the ground. Take your goggles off again. Push the long narrow pipe in the background down, then turn the wheel to the right until water is flowing into the left waterwheel. Pick up the short pipe that fell when the walkway broke, and stick it into the sprocket at the bottom right. Turn the wheel twice more, and the rope will fall to the ground. Push the long narrow pipe in the background back up again to lock the turning mechanism. Now climb up the rope, put your goggles on, and cross over the bridge. Take the goggles off again, climb over to the right and head up the vine.

Put your goggles on, and climb up to the branch with the owl. Click on the owl until it leaves, and a branch also falls to the ground. Pick up the branch and put it under the big rock, then use the branch as a lever to move the rock. Next use the branch to direct the trickling water over to the second column. Now shake the lower right tree branch twice (the first acorn will be stolen).

One the far right column, put your goggles back on again. There are two small platforms you can stand on, and these rotate the circular platform around the outside. You need to get the gold ball to the front position; from the starting position, step on the left platform once, and the right platform twice to achieve this. Now climb up the steps on the left side of the sphere and take off the goggles. Jump up and down twice to force the sphere down.

Once you arrive, lift up the metal lock in the middle of the gate. Now pull the lever on the far side of your boat. Turn the left wheel that appears, and your boat will be lowered down. Now push in the handles that are revealed. Finally turn the right wheel.

Now that you are inside the village, take off your goggles and climb up on to the roof. Run off the tip of the roof and while you are in the air, quickly put the goggles back on. Head around the top of the wall to the door, then take off the goggles and head inside.

Turn the crank twice to show a swirling symbol, then step on the right button and finally on the left button; there should now be some light. You cannot get the middle tower light to turn on because the bat is stopping the mechanism from opening. Travel down using the elevator and walk over to the base of the right tower. Pick up the rock and throw it away. Now pick up another rock from the pile on the right. Use this on the left side of the base of the right tower and aim for the bat. Head back up the elevator and step on the middle button. All the tower lights should now be turned on.

Turn the crank once more so a half-moon symbol is showing. Now you need to step on the buttons again to get the lights into a good starting position:

Now turn the crank once more, and step on the middle button so the lights start turning. Jump on to the first light when you can, and jump across the others to reach the other side. Go through the doorway to leave this scene.

Head over to the middle island and pull the string for the yellow bell to get the bat to move. Pull the green string, then the blue string 3 times; the water will be slightly clearer and the goggles will fall down into the water. Jump into the water and swim down through the hole.

Swim over to the bells, then pull the yellow bell down to change it to green and use its top portion to ring it. Ring the blue bell next, then pull the blue one down to change it to orange and ring it in this position. Finally, ring the red bell to change all the pillars to yellow; this is bright enough to light the underwater cavern. Pick up the goggles, then swim over towards the right. Put on your goggles and move the rock, then take them off and swim through the opening.

In the next dark purple cavern you will be initially stuck, so head back down and left to the underwater bells. Ring the blue bell, orange bell and red bell, then swim to the right again and the cavern will be lighter.

Swim down and then up through the hole on the right side. Put your goggles on, and break the ice with the frozen tip, so you can climb out. Run along the icy path then take the goggles off again. Try to open the door below Row, but it is locked. Put the goggles on and go just to the right, then take them off again and you end up inside the house. After you walk outside, help Row down, then follow him inside again.

Have Row climb up on to the pier, then pull the lever up and climb into the large pipe. Now have Lilly hit the drum on the orange pipe and then step on the round wooden platform - Row will be shot up into the top house. Put on your goggles. Next you need to turn the flowers in the tree red:

Take the goggles off again and there should be red silk in the baskets. Now turn the wheel just to your left so the knob moves to the top position, and get Row to run to the right until the pipe cannot go up any further. Turn the wheel once more, then have Row run towards the left until the pipe cannot extend any further. Now run twice to the right and once to the left, and the red silk will be collected. Use the controls to collect the silk from the other 2 baskets in a similar manner. After you do this the arm will retract and the silk will appear in the smaller building. Pull the lever here. Follow Row behind the mended curtain. As you are falling, put on the goggles.