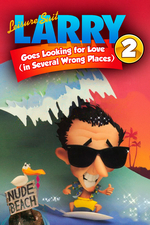 Leisure Suit Larry 2: Looking for Love (in Several Wrong Places) is the second in a long series of games revolving around the exploits of Larry Laffer, a hapless, crude, middle-aged man looking for female companionship. This continues from the previous game, Leisure Suit Larry in the Land of the Lounge Lizards. The game starts with Larry being kicked out by his girlfriend and left penniless in LA. The series continues with Leisure Suit Larry 3: Passionate Patti in Pursuit of the Pulsating Pectorals.

Head into the garage, and when you are on the right side (hidden from view) search then grab the dollar bill. Now head north then east to find a park. A girl will jog past in the distance - look at her. Head north, north, east to find the alleyway next to a shop. Look through the hole in the fence. Walk east and enter the store. Buy a ticket, then leave again.

Walk west 3 times then enter the Krod-TV building. Talk to the girl behind the counter, and show her your ticket. Write down the winning numbers the girl tells you, then repeat them when she asks for your numbers. Walk through the back door when told to, then sit and wait. Follow the guy through the left door to win a dating show (and a cruise ticket). After the show, sit down again and wait for someone to call you through the right door. This time you will win a million dollar bill. Leave the TV studio after your big win.

Head south then east to find Molto Lira. Go inside and get a swimsuit from the back of the store, then pay for it to get some change. Leave the store and head east, east, north to the Quickie Mart again. Fill the large soda cup, then pay for it and go south to the drug store. Buy the sunscreen and pay for it, then return to Eve's house (go west, west, west, south, south). Search through the trash twice then get your passport. Now head east to the barber shop, sit down and get a haircut. Walk west, west, north, north and enter the music store, talking to the woman inside. Finally head east and south to the dock and show your ticket to get on the ship.

Now leave your room and go to the pool at the rear of the ship. Rub some sunscreen on yourself, then lie down. After the woman arrives, do not follow her. Stand up and jump into the pool - swim or you will drown! Dive down to the bottom of the pool and take the bikini top, then swim to the surface again. Climb out of the pool and return to your room, changing back into your suit. Head up to the revolving restaurant and take the spinach dip. Now go to the barber and sit down to get a wig. Walk to the captain's deck and push the lever - now head to the lifeboats and jump into the nearest one.

While you are drifting away (but while the cruise ship is still on the screen) wear some more sunscreen, put on your wig and throw away the dip (because it is now rotten). During your time in the lifeboat, you will automatically use the large drink and the sewing kit. You will eventually arrive on an island.

Head south into the jungle and take the flowers when you are next to them. You will eventually reach a restaurant - talk to the maitre d' and sit in the chair as instructed. You will eventually get a table, but don't bother sitting down. Head to the bfufet and grab the knife, then leave. Now you will find an empty guest room. Take the soap and the matches, then head through the jungle again to reach another barber. Sit down to get long blonde hair. Leave again to reach the beach. Head left and take the bikini, then go through the jungle again until you reach the guest room. Wear the bikini, and put the dough in the top. Visit the barber and sit down again. Now return to the beach and walk right, past the KGB agents. At the end of the cliff, wear the suit again.

Walk close to the 2 people at the doors and throw the flowers to get rid of them. Now enter the airport and head into the barber shop to the left. Look at the woman, the sit down for another haircut. Now head right twice and show your passport to get through to the suitcases. Take the one with the army camouflage pattern.

After the bomb explodes, buy a ticket at the ticket booth. Show your passport again and go right twice. Buy some food, then take the pin out of it. Walk to the machine and buy insurance. Now head up the conveyor belt and take a pamphlet, then show your ticket to get onto the plane.

You will automatically be guided to your correct seat on the plane. After take-off, give your pamphlet to the guy next to you, then take the airsick bag and stand up. Walk to the rear of the plane and put on your parachute. You can see 2 doors at the back of the plane - there is a 3rd one towards the bottom of the screen that is not visible. Stand in front of it and use the pin to pick the lock. Now push the red handle and open the door. Open the parachute straight away and you will land safely.

Cut yourself free with the knife. Get the stick from near where you land, then crawl under the bush to head south while avoiding the bees. Use the stick to fend off the snake, then head east and cross over the quicksand following the trail of slightly lighter sand. Don't walk in the water on the next screen - swing across with the vines 3 times to reach the other side in safety. Pick up the loose vine and head east again to meet Kalalau.

After the cutscene, head back to the beach. Get some sand, then head back through the village and get some ashes. Return to the ledge and throw the vine over the branch so you can swing across. At the glacier, use the ashes or the sand on the ice. Walk up the volcano and put the airsick bag inside the rejuvenator while you are standing next to the hole. Light the bag, then drop the bottle. Finally, walk to the elevator to complete the game.