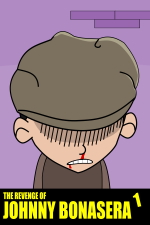 The Revenge of Johnny Bonasera Episode 1

After the punks arrive, choose any dialog option, then try to punch Woody (the fattest one). You will end up having to crawl away to plot your revenge.

Pick up the bat and rope from the box in your room.

Use the pee-soaked sock on the punk to wake him up, then hit him with your bat. Talk to Joe about everything, then leave again.

Enter the alley and look at the poster.

Head into the Tattoo Parlor. Ring the bell 3 times, then take some sweets from the plate on the counter.

Use your bat on the mailbox, then search it to get an Ultra Ranger ID card. Examine this in your inventory, then head around to the back of the house. Put the sweets into the bucket of paint. After the painter leaves, take the gloves from his ladder. Look through the open window to see Raven's brother is upstairs. Go back out the front of the house and talk to the Postman - he won't give you the package because you don't look like the ID.

Examine the Ultra Ranger ID card in your inventory again and you will peel off the photograph. Talk to Magufo at his stand about everything, then use the ID card on him and you will draw your own face on the card.

Show the Ultra Ranger ID card to the postman and he will give you the parcel. Approach the front door and ring the doorbell. Say that you are the postman, and Tonino will leave with his new drone. Return to the back of the house and climb in through the open window. Move the bin, plug in the cable and turn on the stereo. Take the CD from the stereo. Grab the muffin before heading out through the door on the right.

Enter the bathroom. Open the mirror and take the soap, then close the mirror again. Use the soap on the mat, then leave and re-enter the bathroom. Take the key from the wall, then leave the bathroom again. Use the key on the padlock to Raven's room, then go inside. Pick up the portable CD player, and combine this with the CD in your inventory. Try to open the safe with any combination, then return to the bathroom. Talk to Raven and ask about the combination - she mentions the band Smelly Punk. Go back to her bedroom and examine the poster. Return to the bathroom and talk to her about the band's song. Back in her bedroom once more, open the safe with combination 7-1-1. Search the safe to find a packet of cigarettes and a letter. Leave by going out through Tonino's room.

Talk to the little thug and exchange your cigarettes for his pogo stick. Enter the alley and use the gloves on the hole to catch a mouse.

Enter using the ladder at the back of the house. Return to Raven's bedroom and use the pogo stick on the guitar Revenge against Raven. Leave through Tonino's room.

Use the muffin on the pigeon, then steal the pen from Magufo's stand. Now head into the Tattoo Parlor and use the mouse on the tattooist. Enter the room on the right. Pull the cable, then quickly use your pen on the design to change it. Leave the room Revenge against Woody. Return to the street and go to the Scissors and Tools store. Use your spike on the shop window, then use your bat on it.

Give the spike to Robie and he will escape. Use your bat on the bench, then pick up the spike again and use it on your handcuffs. Now you can leave.

Go to the Scissors and Tools store and steal the tweezers through the broken window.

Use the tweezers on the punk Revenge against Joe. You will have now completed the main game Revenge Completed.

Use the rope on the right, then pick it up. Use the rope with the chair, then use it with the glow in the ceiling. Climb up the rope, then talk to the policeman and say "Look behind you...". Quickly pick up the Goddess of Serpents and throw it at the policeman Robie scaped.