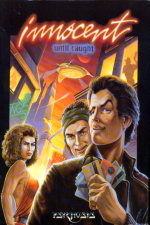 Innocent until caught is a third person point and click adventure game with animated cutscenes. You play as Jack T Ladd, interstellar thief and general rogue. You are in big trouble with the tax agency and need to make some money fast. The story continues with the sequel, Guilty.

Take the passport from the bench. Talk to the guard to learn about a pawnbroker, then leave the spaceport. Head along the road to the left, then enter the bar. Talk to the guy wearing the pink shirt, then steal the ticket from his pocket. Also pick up the jar and cover from the table on the left and use the two together.

Head back outside and continue left, entering the pawn shop. Give the ticket to the pawnbroker and you will receive a camera. Pick up the vase and use it in your inventory to get a gum wrapper. Leave the pawn shop (you will put the vase back) and enter the alley you passed on the way. Continue left along the alley out to a new area with a food booth. Use your camera in the power outlet on the side of the booth to charge it. Pick up the oil can and look in the trashcan to find an egg. Talk to the Bikers and one will ask you to find his ornament. Return to the alley. Try to take the hat from the tramp here, but he won't let you; use your camera on him, then quickly steal his hat while he is blinded. Examine the hat and you will find some money. Also take the hose, empty bag and can.

Go to the pawn shop again and pick up the vase, then put it in your bag and walk out with it. Outside again, show your passport to the bouncer, then enter Paradise. Talk to the madam (in black), then give her the vase. Talk to her again about the reward, and you can take the ornament from the small table. While you are here, take the perfume from the small table, the cane from the floor and the gum from the receptionist's table.

Return through the alley to the food stall and give the ornament to the biker. Talk to him and your bag will be filled with money. Return to the bar and sit down in the left chair. Talk to the bartender and order a drink, then give him the change to receive the drink. After the fight, you will receive a single coin as change. Use this with your gum wrapper to make a token. Pick up the ring from the ground and head outside. Enter the subway station and use your token on the gate, then head down to the train platform. Use your oilcan on the screwdriver and pull it out of the vending machine. Also take the radio from the left end of the platform, then leave the subway.

Go to the bar once more and talk to the robowaiter. Use your screwdriver to remove its circuit board, then combine this with your radio to make a remote control. Go through the alley to the food stall, then through the other exit to reach the docks. Use your remote control on the robot here, then take the sailor's hat from the railing.

Go back to the pawn shop and talk to the pawnbroker, saying you have something he might be interested in. Give him the ring and he will tell you about a job. While you are here, give him the sailor's hat and you will receive a magic carpet.

The Egg of a Giant Kahoula Bird

Go down to the subway and board a train. Pick up the aerosol can from the floor and combine it with your hose. Get off at each of the 5 stations, then get back on the train; from now on you can look at the map on the train to jump to any station. For now, head to Regurgi Station. Leave the subway and pick up the hotdog from the hotdog stand. Return to the subway and go to East Eruk Station. Walk outside and use your screwdriver to pop the kid's balloon. Pick up the string and combine it with your cane to make a bow.

Return to Badside Station and go to the port. Hopefully a truck will arrive and you will hitch a ride into the zoo; if not, just leave and come back until this does happen. Inside the zoo, pick up the straw and then the grate to reveal a hole in the ground. Pick up the stick and a vine and combine the two in your inventory. Pick up the other vine and attach it to the hook in the ground. Use your perfume on the creature and it will fall off its ledge. Next use your bow on the ceiling to shoot your grappling hook up there. Use the hanging vine to swing over the gap and continue to the left.

Wait until the butterfly gets eaten by a plant, then try to pick up the rabbit and it will also get eaten. Feed your hotdog to the third plant. Now walk over and swap your egg with the egg in the nest. Return right and swing back across, then climb down the hole. Walk left and through the tunnel, then catch a train to Badside Station. Go up and visit the pawnbroker, giving him the egg.

The Sculpture by Renato Spangle

Go to the subway and take a train to The Hill Station. Leave the station, then pick up the mushroom from the far right before entering the museum. Take the small pebble from the stand just inside the entrance. Walk right and put your magic carpet on the floor by the glass display case. Use your aerosol gun to shoot the glass case. Pick up the pebble and do this twice more, then pick up the sculpture. Head back to the subway and go to Badside Station. Go up and visit the pawnbroker, giving him the sculpture.

Go to the subway and take a train to Regurgi Station. Use your jar on the hotdog stand to fill it with mayonnaise, then use this on the fly on the left to catch it. Continue left and enter the police station. Talk to the desk sergeant, and when he mentions a drug bust click on those words. Take the bag of flour when it is offered. Leave the police station and go through the next doorway to the right to enter a bank. Talk to the teller windows, and someone will come to help you. Talk to the teller and say you want to open an account. Offer her your bag of money, then press the buzzer next to the door and you will give the bag to the man who appears. Press the buzzer again, and while the door is open use your gum on it. Open the door to go through. Use your screwdriver on the top left of the filing cabinet twice.

Leave the bank, return to the subway and go to East Eruk Station. Go through the doorway on the left to enter the sewers, then use the map you just got and you will automatically enter another area of the sewers. Use the map once more to enter an alcove. Put your mushroom in the alcove, then use the fly in a jar and it end up blowing a hole in the wall. Head through and use your bag of flour so you can see the laser beams. Go through and take the bonds from on top of the safe. Return to the sewers and go right, then through the tunnel to the subway. Take a train to Badside Station, then return to the pawnbroker and give him the bonds.

Talk to Narm and get him to distract the old lady, so you can steal the fur from the top of her luggage. Talk to him again and get him to wait for you at the nearest bar. Try to leave to the left and you will talk to the security officer. Now leave to the left. Enter the building on the right to find a warehouse. Take a screwdriver from the shelf, then talk to the man twice to receive a book and a box of spare parts. Examine the book to get a password, and use your screwdriver on the box to create a clockwork mouse. Use your fur on the mouse.

Leave and enter the building on the left to find a bar. Talk to the lab technician at the bar and he will help if you deliver a letter for him. Leave the bar and head down the road to the right. Say the password to the guards and you can go through and walk towards the building on the left. In the garden, use your mouse on the dog to distract it, then walk through the archway. Climb the trellis and enter via the balcony. Talk to the princess and you will arrange a date. Leave the way you came and return to the bar. Talk to the man and he will give you some keys. Talk to Narm and ask him for a uniform, then when he returns talk to him about your plan. Outside the laboratory, click on the status window, wear your uniform by using it on your body, then go back to the main window. Walk into the lab.

Examine the window of your cell and Narm will appear. Ask him to give the princess a poem from you (choose the nice options), and she will come and save you just in time. Leave the palace to the left and return to the bar. Ask the princess about everything, and she will get you a travel warrant. Leave the bar and head down the road to the left. Ask Narm to get you a crate from the spaceport, then go to the spaceport, put the warrant on the crate and climb inside. Onboard the ship, walk into the escape pod on the right.

In the vault, drop down to the floor and try to use the white storage device. Use your crowbar on the nearest crate, then take a helium tank and balloon from inside. Use the tank on the balloon to get back up to the platform, then return to the control room. Talk to the princess again to get a pass key, then go to the vault and use the pass key on the storage device. Take the crystal, then take another balloon from the crate and use it on the helium tank to get back up again.

Go to the control room again and put the crystal in the console in the middle of the room. Use the console, but it won't work. Leave the room and come back in again, and the dictator will now be there. Talk to him and bet him the Transatron doesn't work, but admit you don't have anything to bet. Talk to the princess, then talk to the dictator again and say that if you lose the bet he can keep the dowry.