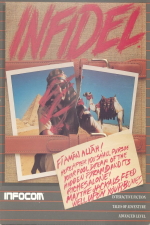 Infidel is a classic text adventure game by Infocom. You play as a fortune hunter who has been branded an infidel and dropped in the desert; you have two goals, to find treasure and to survive.

Stand up and leave the tent, then go south. Pick up the matchbook, then continue south twice more to reach the work tent. Read the note. Open the knapsack and get the canteen. Now take the sack. Return north twice, and go west twice. Get the axe and the shovel.

Next head east, north and west to reach a river bank. Open the canteen and fill it with water. Go east twice and enter your tent, then break the lock with the axe. Get and drop the lock, then open the trunk. Get the food and the map. Open the map, then get the cube and drop the map. Read the sticker. Now leave the tent, and go east, south twice and east twice. Dig in the sand 5 times to reveal the top of the pyramid. Put the cube in the hole. Drop the shovel here, then go down.

Drop your sack and get the rope. Tie it to the altar, then throw it north. Grab the torch and jar. Open the jar and dip the torch in it. Light a match, then light the torch. Close the jar, and put that and the matches in the sack. Pick up the sack again.

Note: When you get hungry, eat the beef and drink some water.

Go south twice, northeast and northwest to find the Barge Chamber. Next go west, north, east, north 5 times, west and south. Get the gold chalice, then return north and east. Now head east and south, and take the silver chalice. Return to the Barge Chamber by going north, west and south 5 times. Walk west, south, east and north to board the barge. Examine the mast here, then go east, down and west. Examine the slot to see a shim - get it and drop it. Return east, up and west, and take the beam. Go west and read the scroll, then return east. Now go back to the Chamber of Ra, by going south, southeast, southwest and north twice.

Next head east into the Cube Room, then go west and south. Examine the panel. Remove and then drop the first brick, then the third brick, and finally the fifth brick. Now you can go east and down twice. Examine the hieroglyphs, then remove the plaster (using your pick axe). Go west 3 times, then read the hieroglyphs here. Put the beam in the niches, stand on the beam, and remove the plaster (using your pick axe). Open the door and go west. Pick up the beam and go south. Now put the beam in the door before opening it and heading west.

Put the diamond cluster in the first hole, ruby in the second, emerald in the third and opal in the fourth. Raise the slab and take the spatula and the book, then put both in the sack. Pick up your sack and return east.

Get the beam and head north twice. Put the beam under the timber, then break the seal with the axe and open the door. Go north and east into the treasury. Drop the sack. Put the golden chalice on the left disc. Fill the silver chalice with water, then put it on the right disc. The discs should now be level with the table, so take the scarab and your sack.

Return west to the Burial Chamber and drop your sack. Put the book in the large recess and the scarab in the small recess. Now turn the Neith statue, then the Selkis statue, then Isis, and finally Nephthys. Open the sarcophagus - you will die, but complete the game.