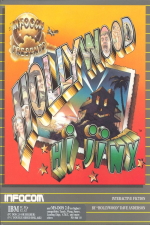 Hollywood Hijinx is a classic text adventure game by Infocom. You play as the potential heir to Hollywood royalty; to come into your inheritance, however, you need to find 10 famous movie props within 1 night.

Go north to the house and open the mailbox, then take the yellowed piece of paper and the business card. Read the card (note the name ROY G BIV, and the number 576-1851) then drop it. Try to open the door, but it is locked. Go back south and turn the statue west, then east, then north (directions from the poem that came with the game) - you will hear a click. Head north, open the door and go inside.

Examine the red statue, then the white statue and the blue statue (note the number of fingers each is showing). Now go east twice and move the painting, then take the green punch card. Examine the safe - the dial is set to 6. Turn the dial right 3, then left 7, then right 5. Open the safe and take the cheese grater. Go west and drop the green punch card, then west again and drop the cheese grater.

Go east and enter the closet again. Take the bucket, then go north twice. Unlock the patio door, then open it and go north. Take the orange punch card before heading east and north twice. Examine the cannon, then fill the bucket with water. Head east, south, west, south twice and enter the closet. Hang the bucket on the third peg. Now go north and up, then south so you are standing on top of the closet. Wait twice and the closet will rise because the bucket is now empty. Open the door and go north, then open the panel, open the trunk and take the fire hydrant. Head down twice and west, then drop the fire hydrant. Go east and take all.

Walk north, west twice and down, then open the door and go south. Get the blue punch card, then go back to the north. Turn the computer on and examine it. Now put the punch cards in the slot, in the order indicated by the business card from the mailbox (red, orange, yellow, green, blue, indigo, violet). Look at the display to see a phone number (576-3190).

Go up to the kitchen. Open the matchbox and take a match. Go back to the cannon (go east twice, north, east and north twice). Take the cannon ball and put it in the cannon. Light the match, the light the fuse. Now you can open the compartment and take the catcher's mask. Head east, south, west, south twice and west, then drop the mask.

Head north into the dining room and pick up the thin piece of paper. Put it on top of the yellowed piece of paper to reveal a map. Go east, north twice and northwest, then take the shovel. Go northeast and north to reach the entrance to a hedge maze (the map for which you have just seen).

Now walk west, south, east, south twice and west, then drop the stamp. Go east and drop all except the flashlight, then go west and take the red statue. Walk east and up, then open the door and enter the closet. Take the skis. Next head north, down, north twice, east, and north 3 times to reach a cliff. Drop the flashlight. Go south and east twice, then wear the skis and go north.

Blow out the statue, then drop the skis and the statue. Take the ladder and the flashlight. Go down and hang the ladder on the hooks. Examine the safe and read the plaque - the names have 4, 5 and 7 letters, and start with L, R and L. Turn the dial left 4, right 5 and left 7. Open the safe and take the film. Now head up, south, east, south, west, south twice and west. Drop the film.

Dial 576-3190 to get a recorded message. Now go north, west and down, and take the toupee. Take the peg and the note, and read the note.

Head up, east twice, south, up and south. Put the peg in the hole and you will end up in the cellar. Note all the objects that are here - pick up each one and attack Herman with it. You will eventually injure him. Untie Hildegarde to complete the game.