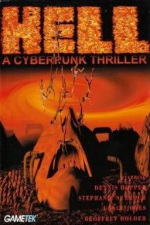 Hell is a science-fiction adventure based on the premise that humans have discovered that Hell is a real place, and passage to and from Hell is governed by a private company, Hand of God. You play as Gideon Eshanti and Rachel Braque, two government agents who survive an assassination attempt only to end up in Hell. You must try to escape and discover who wants you dead.

Talk to Dante, then take the spare key from the computer table.

Take the Scrub List from the table, then talk to Jersey about everything.

Talk to the man at the door and respond with the password "sesame" (first letter of each word on the sign). Go through the manhole to enter Interface - you will automatically talk to Cynna Stone and she will join your party. Talk to everyone here, recruiting Scub Stevens and Sophia Bene. Enter Mr Beautiful's office through the door beneath the stairs. Talk to Abonides, giving the password "condemnation". Agree to travel to hell when prompted. Pick up the weapons invoice, combat buddy, explosive charge, hell blade, nerve gas cartridge and all 4 guns. Head right and talk to Sanguinarius - you will automatically defeat him. Talk to Mr Beautiful again, but he has no more jobs for you yet.

After automatically talking to Christopher Modesta, talk to the other people outside. Enter Clean Machine Clubhouse to the left and talk to Gracie Lovell and Drip.

Enter the Clean Machine Clubhouse again, and head to the lower right into the meeting room. Talk to Phrackie and get her to run a Rap so you end up with lots of money. Next talk to Temperance Lector, who will agree to leave Drip alone. Go back out to the Clubhouse and talk to Gracie to give her the good news, before heading outside. Now enter the Deadly 7 Clubhouse and talk to Electric Sex (on the couch) before heading down to the meeting room. Talk to Barbara Bacchus and Languo.

Pick up the copper tubing from the ground, then talk to Dr Clean and accept her offer of a picklock implant.

After automatically talking to Aldous Xenon, take the homing device.

Talk to the guard on the right, then use Sophia's forger skill on her pass template to create a level-4 pass - move this to Gideon's inventory, then show it to the guard. Take the mechanic's creeper, then look at the lunchbox on the ground and remember the name on the side. Return to the office and talk to the dispatcher, asking him to page "Jo Boyle". Go back into the garage and plant the homing device in the limo.

Talk to Aldous Xenon, who will give you a new destination.

Talk to Derek Literati, who is sitting on the couch, then go through the left door and talk to Senator Erin Burr.

Talk to the receptionist, asking to go to Gen Mangini's Pentagon Office. Step on to the walkway, then go through the door when it opens. Talk to Sanguinarius and accept his offer of a journey back to Hell. After the introductions, use your hell blade on Krystal Getty (the hostage) to free her.

Use your lockpick implant on the glass doors, then head inside. Pick up the pencil and use it on the tablet (notepad) to see a password, then use the computer and enter "God's Justice". Read all of the information available - most is available without further passwords, but there are 3 restricted areas where a password hint is given that you can work out:

There are some further entries that cannot be reached without knowing more passwords. By viewing the information thus far, there are more locations now available on your map.

Talk to Professor Coronary about everything, then go right into the computer room. Talk to Wickersham Dodge and Daniel.

Talk to the technician, then go through the door and save your game. Use the mechanic's creeper on the floor, then survive an arcade sequence where you must avoid laser beams. At the other end of the corridor, examine the resurrection units to see a body with a tattoo on its chest.

Pick up the large beaker, small beaker and electro magnet. Use Scub's jury rig skill on the copper tubing in your inventory to create a still. Now talk to Ben Brewer about everything.

Talk to Mick to learn the location of an asylum. Take a beer from the fridge and combine it with the dream powder in Scub's inventory, then put it back in the fridge. After Mick falls asleep, take the collector unit.

Go through the right door and then through to the Deadly 7 meeting room. Give the still to Languo, then talk to her. Return to the previous room and talk to Electric Sex, then give her the spare key to Dante's apartment and she will give you a password. Go through the meeting room to the room beyond. Use the computer here and enter the password "bloodnet". Read the 3 files on the computer, then go out to the alley. Talk to Christopher Modesta, then Chastity Bene.

Go through to the back room and give the collector unit to Suzy Toast so she will modify it for you.

Talk to Phyllis Dancing-till-Daybreak and Clap about everything, then enter the next room to the right. Use your collector unit (with cyberfry) on Chet or Hump.

Talk to Milwaukee Jack followed by Splits Magnola. Take a bottle of beer from the bar and throw it at the TV. Talk to Splits Magnola again and recruit him, dismissing Scub Stevens.

Go through the door and talk to Suzy Toast again.

Talk to Dean Sterling to receive a device.

Talk to Grinda Dove, then Rutterkind and finally Asmodeus, agreeing to go to Hell. Talk to Asmodeus once more. Back in his office, talk to Dean Sterling then take the Psychopomp from the floor.

Use your electro magnet to get the Blaze parchment from the corner of the room.

Go through the right door into the Resistance HQ computer room. Talk to Senator Erin Burr, then to Katerina Goertz. Use the Psychopomp on yourself with address "Charon".

Pick up the staff, floating beasts, zoo keys, jar of food and bucket of Styx water. Talk to Eddy Commerce and Machalus. Use the jar of food on Machalus, then use the zoo keys on the animal cage.

The Wall of Flame Hellpit

Talk to Prudence Alala. Put your steel cover over the steam hole, then stand on it and wait.

Talk to Malebolge (the dentist). Use your nerve gas cartridge on the large dentist tanks on the left. Now take the NO2 cartridge and the dentist drill.

Talk to Dingo Tucker, then use the NO2 cartridge on the tubes.

Head down to Mr Beautiful's office and pick up the cue stick. Talk to Secedine Marto, and you will end up with a series of numbers and the code R=23. You can convert the numbers to the phrases "Friut Death", "Hell Road" and "Oil". Ignoring the spelling mistake, click on the jukebox and find 3 songs or artists with matching names "Orange Martyrdom", "Damnation Avenue" and "Viscous Fluid". Enter their corresponding codes E3, E8, D9. Go down into the secret room and you will receive a DAT.

Give the DAT to Nick Cannon.

Talk to Ms Stinson, then Mr Calcutta, then Ms Stinson again, who gives you a clue about another password.

Use your lockpick implant on the glass doors, then head inside. Use the computer and enter "God's Justice". Look up Government Operations: Massimo Eddy and enter code "Triangle" to receive a credentials template. Use Sophia's forger skill on this.

Talk to Mr Calcutta again now that you have the credentials.

Use Splits' psionic skill on the guards, then continue into the next room. Look at the panther, then use your cue stick on the floor lamp. Head through the door and talk to Massimo Eddy, then examine his note and color chart.

Go through the right door into the Resistance HQ computer room. Talk to Katerina Goertz to hear about two more hostages (if she doesn't have the information yet, travel around a bit and come back). Use the Psychopomp on yourself with address "Charon".

Talk to Charon to travel again.

The Belly of the Beast

Talk to Thelma Bay Chesapeake, then pick up the femur bone and use it on the stone.

Talk to Gack and Jeremy Verdi. Combine the hell blade and mug of acid in your inventory. Give the mug of acid to Gack, then take his bucket of tar.

Use your lockpick implant on the glass doors, then head inside. Use the computer and enter "God's Justice". Look up Government Operations: Night of Re-Entombment and enter code "Jeremy Verdi", followed by code "Gesticulate". Read the memo in your inventory.

Go through the right door into the Resistance HQ computer room. Talk to Senator Erin Burr then Jeremy Verdi. Give Massimo's note to Jeremy then talk to him again. Talk to Katerina Goertz to hear about the final hostages (if she doesn't have the information yet, travel around a bit and come back). Use the Psychopomp on yourself with address "Charon".

Talk to Charon to travel again.

Talk to Brett Carew, then use your staff on the gears.

Talk to Atroxias and Walker Dash, then use your dentist's drill on the water jar.

Use the explosive charge on the floor near the glowing segment, then pick up Belial's medal once he is defeated.

Use the bucket of tar on the floor, then pick up Beelzebub's wing once he is defeated.

Talk to Mephisto, then pick up his hand once he is defeated.

Talk to Katerina Goertz and Senator Erin Burr, then use the Psychopomp on Rachel with address "Spawner".

You will automatically travel here. Talk to the receptionist, asking to go to The Pneumatic Delivery Room. Step on to the walkway, then go through the door when it opens. Pick up a pneumatic delivery tube from the ground and put Cynna's gas bomb inside it. Talk to Jute, then give her the pneumatic tube and enter "Miraculum Sepulcrum". Return through the door. Talk to the receptionist again, asking for The Pentagon Chapel, then go along the walkway and through the door. Pick up the taper from the ground, then light the candles in this order:

Go down through the hole where Solux appeared and use the Hell Bug disk on the Hell Mainframe.