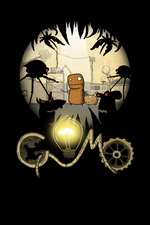 Gomo is a surreal side-scrolling point and click adventure game. You play as protagonist Gomo, who awakens to find his dog has been stolen and a note left by his captors. You must embark on a quest to retrieve a red crystal to exchange for your dog's life.

Take the key from the wall, then use it on the door on the right to get outside. Look in the doghouse, then after you receive the alien message, head right and get in the mine cart.

Pick up the chalk and you will deface the poster. Go right and up the stairs, then head right and you will fall down. Look in the sack on the left to get a keycard, then climb down the stairs to the WC. Use the middle toilet and you will get a code. Climb back up and now take the grappling hook from the post. Use this on the landing, then climb back up. Use your keycard on the door here, and press the buttons indicated by X's on the code you received. Press the button at the bottom right to get through the door.

Climb the small ladder, then look at the controls inside the machine. Drag the first lever down, then the second lever down until the left button turns green, then press the green button. After the rock moves along the bottom conveyor belt, use the other pair of levers to get the jaws to sit above the rock. When the right button is green, press it. Raise the right arm with the two right levers until the rock is over the top conveyor belt, then press the right button again to release the rock. Climb back down the ladder and go right.

Look at the poster on the wall, then use the machine and your rock will be sucked up the pipe. Head right up the stairs and take the piece of paper from the large container to unlock a bonus game. Also take the CD from the edge of the container. Press the button on the wall, then return left and use your CD in the machine - it will explode. Climb up the ladder here and you will end up traveling through the pipes up and over to the right. Climb up the next pipe to reach a new area.

Press the button on the machine here. Pick up the string from the railing just to your left. Pick up the rock from the ground. Try to open the door on the right, then use the string on your rock. Head inside, climb the ladder and take the black key. Go back down and use this on the next door, then pull the lever on the generator inside. Climb the ladder, then take the photograph and press the button to the right. Remove the flower picture and try to use the scanner, then use your photograph on the scanner. Press the button to continue to the right.

Climb up to the platform, remove the cover and steal the red crystal. Use the crystal on the robot guard that arrives, then repeat this to get rid of the guard. Press the button on the right to leave this room.

Enter the elevator on the right and look at the controls. Use the buttons on the right to turn the panels around to form a connection between the top left and bottom right of the grid, then press the large button to get the elevator moving.

Pick up the shears from the stool and use them on the sheep. Head right and climb the ladder, then use the telescope to see a code on the sheep. Climb down and enter this code on the keypad to the right, then press OK. Take the crank and attach it to the post to your right, then turn it. Climb the ladder and use the windmill blade, then continue right.

At the windmill, there are a number of colored stones in the wall on the right, arranged in 3 columns, and there are 3 locked windows. Go to the circular device on the wall and turn it so the stones lining up with the arrow are pink, green and blue, then open the first window. Now set the stones to brown, pink and yellow, and open the second window. Finally set the stones to yellow, brown and green, and open the third window to be surprised by a snake. You can take the umbrella and magnifying glass from the other two windows. Try using the magnifying glass on the lamp, but it is too cloudy to work. Use your crank on the side of the windmill, then use the magnifying glass on the lamp again before heading down the well.

Use your umbrella on the switch on the left, then head through the door on the right. Continue up the next shaft. Climb the ladder and grab the small capsule on the roof to unlock a bonus game. Now shake the beehive, then use the beehive to cross the stream. Pull the carrot out of the ground. Try moving the lever on the machine, but nothing happens. Put your carrot in the tall stand just to the left. Put your red crystal in the jar. Move the lever again, then walk into the portal.

Walk to the machine on the right and remove the panel at the bottom, then look inside. Connect the black and red wires, green and yellow wires, and purple and blue wires. Press the green button. Now exit to the left and you will retrieve your red crystal. Head to the right.

Pick up the package and solve the sliding puzzle to get a herbicide spray. Use this on the plant to the right, then climb the ladder. Pick up the knife and try to open the door. Climb back down and use the knife on the barrel. Reach into the barrel to get a key, then return up to the door and use the key to get inside. Try to climb up inside the trunk, but the fox there won't let you. Use the light switch on the left, then pick up the toolbox and take the screwdriver from inside it. Try to use the power cord to the right of the trunk, then use the screwdriver on the socket and use the power cord again. Now climb up and turn on the lamp. Read a book from the bookcase. Try to climb up some more and you will fall; try again to succeed.

Climb up to the higher branch and drop the apple on the owl to get rid of it. Climb back down and get the axe, then walk left and lift up the long plank. Walk right and try to walk up the plank, but it will fall down. Lift it up again, and this time hit the nail with your axe to hold the plank in place. Walk up the plank into the balloon. Pull the cord to take off, then use your axe to cut the rope.

Jump on to the nearest cloud, then shuffle them around so you can move to the far right and enter the spaceship.

On the alien planet, pull the green limbs of the creatures on the left to unlock a bonus game, then enter the cave on the right (which turns out to be a monster's mouth). Take the very small thread hanging down, and use this on the two longer threads just to the right to tie them together. Move the jack-in-the-box right twice then set it off, so it pulls the longer threads and opens the passage for you to head right.

Move the rock next to you, then pick up the plank to create a seesaw. Stand on the right of the seesaw, then pick up each of the 3 pebbles from the ground, and you will eventually reach the platform above. Continue to the right. Give the red crystal to the alien, then pick it up again.