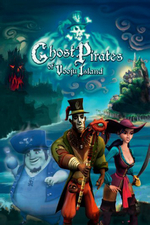 Ghost Pirates of Vooju Island is a comedy 3rd person adventure game. You control 3 different characters, all cursed by the evil Queen Zimbi and turned into ghosts, and must use them to work together to reverse the curse and exact revenge on the Queen.

Head left and pick up a bag of chicken feed. Look at the fence posts and lift up the loose one. Go up to the plantation and try to take a coconut from the left bin. Shake the ladder, then open the door at the top to release more coconuts. Use the coconut in your inventory on one of the zombies, then on the other one. Go back down to the chicken coop and use your chicken feed on the lava moat and you will make a trail.

Walk right through the classroom, into the hall, and then into the bedroom. Throw the potted plant over the chalk on the floor and it will be cleaned away. Look at the curtain rope and examine it. Now get your mask and robe from the wardrobe. Open the weird music box over on the right. In your inventory, click the music box on Blue Belly and he will identify the song lyrics. Now touch the candle holder, and ask Jane about it to find a secret panel. Now ask Jane about the cryptic symbols, then combine them with the song lyrics.

Pick up the ink and the letter, then ask Jane about the ink. Go back out to the hall and touch the fruit and vegetables on the table. Ask Blue Belly about these, then use them on the water flagon. Enter the bedroom again and use the cabbage water on the letter. Go back through the hall to the classroom. Push the bookshelf, then try using the rope on the spirit-repelling idols. Ask Jane about making a lasso, and the idols will be tied together.

Go back to the hall and use your mask and robe on the maid to scare her. Touch the mop and bucket that she drops, then go back to the classroom. Touch the Juju stick. Walk past the bookshelf to the oracle room. Use cabbage water on the skull, then clean it with your mop.

Smash the banana tree, and the zombie walking past will continually slip over. Go down to the dock and push over the barrel with salted fish to trap the other zombie. Enter the warehouse. Push the statue on the back wall, then climb up to the attic. Open the shutters, then touch the drums and throw them out the window. Outside again, move the middle drum so they all line up. Pick up the Hand of Glory Snuffer the large zombie drops. Go inside again and use this on the candle inside to wake up the crew. Go outside and head right to the ship's deck.

Pull the metal shield off the wall, then examine the box of wood next to it. Ask Blue Belly about the wood. Go up to the top deck and move the crate, then open the lantern. Untie the block and tackle to free the sail, and it will catch on fire. After the zombies run up to put out the fire, use your wood on the fallen shield (brazier), then use the winch to lower the net. Finally push over the top barrel and you will automatically catch the zombies.

Head right into the tunnels. Touch the rope, wooden crate and cargo net. Open the chest and ask Jane about the tools inside. Combine the cargo net with the wooden crate, then hang this from the hook in the ceiling, and push it to the zombie. Return left and look at the pickaxe, then use your files on the padlock. Ask Jane about the files, then examine the shovel.

Go right twice to find the apothecary. You need to steal some bottles from here, and distract Queen Zimbi beforehand. Push over a book from the left shelf to take the chicken blood from the right, then push the right books to steal the mysterious bottle from the left, and finally take the 2 bottles from near the bottom of the screen. After each time you will go to the mud pool and have to walk back. Once you have these, return to the apothecary again and knock over the demon bottle that is on top of the right bookshelf. Take the small vat from her table. After you go back to the mud pool, head left to find a steam vent.

Take some bamboo from the bundle on the right. Use your files on the 2 empty bottles to get some glass disks. Combine these with the bamboo stalk in your inventory. Back at the mud pool, use your spyglass on the glass jars hanging over the bodies - you can read 2, but the 3rd is blocked by a feather. Use your shovel on the rocks, then use your bottle of acid on the shovel. Use the spyglass to read all 3 names, then use your chicken blood on the shovel. Next use your pickaxe on the bamboo ledge in the background, then push over the log. Look at the bodies, then go left to the steam vent.

After a long cutscene including talking to the Governor and Queen Aquaphina, go back towards town. Steal a rope from the boat, then go through the gate. Tie your rope around the tree root then the beehive, and enter the wedding. Steal the mints from the table, and you will take them back to the tavern. Talk to the pirates on the right, then to your father about the missing rum. Leave the tavern and go to the sewers (down in the water). Pick up the unlucky smuggler and use him on the unlucky dog to get the files. Use the files on the bars on the left, then use options 321, 4434 and 41 when talking to the other smuggler.

Push over the flour bags to your left, then push over the planks behind the smuggler and shake the armor that is revealed. Move the treasure chests over on the right, then touch the left pirate.

Back in the tavern again, return to town and go left to the beach. Dive into the leviathan's blow hole. Examine your bag of mints to see a warning label. Use your bag of mints on the single barrel on the right. Now unplug the barrels on the left and use the spices to get out of the leviathan. Throw your barrel of mints into the blowhole to get the ship out. Examine the Dead Matey on the beach here, then examine the book in your inventory and ask Jane about it. Go back to the tavern and ask your sister about her pencil. Use your pencil on Jane to get her to forge a note. Go back into town and to the back wall of the mansion. Throw your note up to upper right window (aim to far right and far top).

Go right and continue to the guard room. Pick up the club, then go right to the cliff. Pick up some leaves and put them in the chimney, then head back inside. Use your club to hit the barrels on the right. Now you can pull down the loose beam, before using the club on the remaining barrels. Go left to the hall, and pick up the torch, then use it on the spilled rum.

After changing back into a ghost, take the bowl of vegetables from the left and the flower vase from the right. Use the bowl on the guard, then use the vase on it, and finally move the shield on the wall to get the guard to leave. Now take the doll from the table, then wine and salt shaker from the right, and the laundry basket from the left. Use the basket, wine and salt shaker on the parrot perch. Put the basket on the cart, then push the cart. Use the parrot on the tree, then use the doll on the parrot, and finally use the parrot on Itzacoka.

Go to the Boogeyman Bayou. Take the fishing net, net hook and rusty harpoon. Combine your harpoon and net (rope). Go up into the ballroom and talk to Grimjaw about everything, then look at the rotting floor. Go back outside, then down to the cellar. Kick the support beam. Now go outside and up to the balcony. Use your hook on the chandelier, add your harpoon to it, then use the rope on the right and finally untie the rope.

Back on your boat, ask Papa Doc about your map. Head left to the grotto and take the bottles of rum and wine, the candle, bedsheets, scroll and golden bowl. Ask Papa Doc about the scroll. Try to clean the mirror with your sheet, then go back to the waterfalls and up to see Red Rump. Take the bucket, then talk to Red Rump.

Go back to the waterfalls and get water from the right waterfall (the others are salt-water). Go to the grotto and examine the chair, then use your rum on it. Push over the snake statue and touch the chalk deposit. Go back and talk to Red Rump and you can take his dirk. Go back to the grotto again and use the dirk on the chalk. Pick up the chunk of chalk and the waxy black rock. Combine the dirk with the rock, then use this on the pirate chair and pick up the ashes.

Return to Red Rump. Put the bowl beneath the scary barrel. Add your cork, ashes and full bucket of water. In your inventory, use the "heating lye idea" with Papa Doc to speed up the reaction. Finally use your candle on the barrel to make soap. Return to the grotto and use the soap on the mirror, then use your chalk on the mirror.

After the cutscenes, use the rope above you, the Loa of the Sea, the chandelier, then next room and then go to the temple. To win the sword battle, choose 312, then 232.

Push the bird bath, then enter the tunnels. Go right twice to reach the apothecary. Look at the large book and show it to Papa Doc. Tackle the big zombie, but you can't get the chest yet. Go left twice and take the oily rags. Light the rags on fire with the torch. Go outside and push over the heavy idol, then jump on the smoking fissure and you will fall through the ground. Back with the zombie, talk about the queen, say you are the king, then make him provide his name and rank.