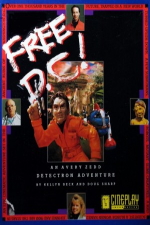 Free DC is a dystopian science-fiction game where robots have taken over the world and most of the remaining humans are on display in a zoo, next to a collection of well-known American artifacts. A series of killings is taking place, and you have 12 hours to solve the mystery. The game is relatively non-linear, and you can die due to the presence of hostile robots.

Choose to react however you want to start off with, but when the Red Knight appears you should run. Talk to Wattson afterwards, and tell him to "go ahead" to learn about your mission. Use your map, then ride Wattson south, around the lake and into a building to the far west. Just speed away from any robots you encounter. Once inside the building, head forward to the Lincoln statue.

React any way to Valerion when you first meet him, then choose to talk and identify yourself as Avery. Behave any way you want, then stay for more information and continue to answer however you feel appropriate - you will end up getting a Laser Rifle. Talk to Wattson about everything, then use him and leave the building.

Use your map again and head to the nearest building to the east (approach it from the south). Get off Wattson and comment either way, then walk toward the building to be greeted by Binkley on the large screen. Talk to him any way you like to start off with, then cajole him and bluff until you can ask about the underground. At this point he will tell you to find out something he doesn't know, so get back on Wattson and leave.

Go east and enter the next building, but this contains some unbeatable enemies ("cones"), so quickly leave again. Continue further east, then go around a lake to enter a large building to the north. Inside, choose to fight the robot, then talk to the young girl who appears. Agree to help her, and you will pick up the Detectron Body. Head back outside.

Continue east and enter the next building. Once inside, go left twice, up twice and right twice, then head down the left stairwell to find a control room. Talk to Memo, starting off polite but ending up aggressive. When you get a chance to talk about Cy, be firm and you will eventually be told to leave. Go back inside and talk to Memo again about Cy, and agree to help her with the Keepers in exchange for her letting Cy go. You will end up outside yet again.

Return west, then north around the lake and into the building again. Talk to Cy proudly, answering Yes, then ask for more information, choose to be laconic, then keep listening and agree with her to receive a Slime Gun.

Back outside, head south around the lake and continue east past Memo's building and just past the next one (there is no accessible front entrance). Go north through the left path into the bushes, then go northwest, east, northeast, west 4 times and south through a back entrance to the building. Follow the same path as in Memo's building, going left twice, up twice, right twice, and down the left stairwell. Talk to Candy, starting off nice but then getting angry and spitting. Mention Florida, then screen anything you like and you will automatically leave.

Head east and south all the way to the bottom of the zoo, then continue west past the first building (with no entrance) and into the smaller round building. Head left 4 times to find a man in a VR unit. React either way to him and he will go back to what he was doing. Agree to let Wattson talk to him now and go along with the sham. Be calm afterwards, then leave the room to the right and come back to the left straight away. Now ask Zapman about everything you can (each time you will need to leave and come back to start a new topic). Once you are done with talking, get back on Wattson and leave the building the same way you came in.

Outside again, continue west and then north into a much larger building. Go right, up and right again to meet Johnnie. Start by being witty twice, then say your name is Avery. You will unfortunately end up outside the building shortly afterwards.

Get back on Wattson and continue west, then approach the ruins and you will fall through to the underground. Harry will arrive while you are still unconscious. When you get the opportunity, keep trying to move and you will eventually be free. Follow the tunnel to the left and you will return to the Lincoln statue.

You will automatically give Valerion the Detectron Body. Act suspicious and jumpy, then behave any way you like and he will leave. Walk away from the statue then approach again to talk to Valerion a second time. Ask him about Harry and Johnnie (you will likely need to leave and come back several times). Once you are done, leave to the bottom left to return to the tunnels.

Head along the tunnels to the right until you meet Harry. Ask him for information about the cones, be contrite, and you will fall asleep.

Return left and go down in the tunnels when you can, to exit through the ruins. Return east and enter Johnnie's building again. Inside, go right, up and right to find Johnnie. Don't draw your weapon when the Atom Guard approaches. Start off friendly, then ask about the Detectron before you are escorted outside again.

Go back to the ruins and down to the underground, then to the far right to find Harry again. Say you are doing well, that you are still missing the head, and that you are grateful when he provides you with the Detectron Head.

Go back through the back entrance to Candy's building in the northeast part of the zoo, and into her control room again. After automatically starting a conversation, act disgusted then give her some prose and answer any way to her question.

Back out the front again, head west 4 times to return to Binkley's building. Approach the screen and pose a riddle to Wattson when prompted, selecting a timeless one. Ask Binknley for some helmet info, then choose soft soap and then freeze info. Insist he goes first, then tell him Memo knows about the freeze.

Use Wattson and your map again, then head west before going all the way north through a gap in the trees to enter a new building. Talk to the Tour Robot here, then when prompted by Wattson get him to explain. Follow the robot to the right and try to talk to it about anything, then keep following and talking until you reach a dead end. At this stage query the robot and ask it about the Detectron. Now use Wattson and speed back out of the building.

Head south and then east to Memo's building, then go inside and around to the control room again. Ask Memo about the fenc, then push for more info. End the conversation however you want, and you will return outside.

Go back around to the southern part of the map and into Johnnie's building. Inside, go right, up and right to find her again. Agree to her question, then mention Bruno, say OK and you will end up outside.

Go west and down into the underground through the ruins. Head right until you reach Harry, then stay relaxed and ask about breaking in. Say "What?" then be grateful for the information. Switch to your Slime Gun and save your game. Head right and you will be inside the Museum. Quickly stun the cones and head down, right, right and up to get the Detectron Brain. Return down, left twice, up and left to reach the underground again, and switch weapons again.

Go all the way left in the tunnels to return to Valerion - you will give him the two components you currently hold.

Get back on Wattson and head to see Cy. Ask her about coffee, then leave again.

Head around the back of Candy's building yet again and go inside to talk to her. Agree to listen to a joke, then ask about the fence before leaving.

Head into the forest in the middle of the map. Searching around you will find several funnelheads to kill, and you will eventually find the Detectron Ray at a random location.

Go to the southern section of the zoo and enter Johnnie's building, going right, up and right to find her. Make a request, and be friendly, give a British accent, and continue to be funny - she will give you the Detectron Servo before you leave.

Head west, down into the tunnels, and all the way left to return to Valerion, where you will give him the last two components. React any way you want to start off with, but you will have to give in eventually. Once wearing the Detectron, you can again act any way you like until the doctor eventually leaves.

Head back through the tunnels and return to Johnnie's building and head right, up and right to her room - she is gone. Go back outside again.

Head to the far east of the map, killing the Atom Guards, until you find a tiny gap in the fence. Go through and enter Building 13. Once inside, head up, right and up twice to find Johnnie. React any way you want to start with, then fire when given the opportunity. Deal with Interface however you see fit; different responses here lead to different game endings.