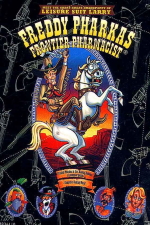 Freddy Pharkas: Frontier Pharmacist is a classic comedy adventure from Sierra On-Line. You play as retired gunslinger turned pharmacist Freddy Pharkas. Through a series of 4 acts you begin by solving problems for people in your small town in the Wild West, and go on to become the hero.

After the prologue, head into Mom's Cafe. Talk to Mom and the cook, then take the empty can of beans (it's in the foreground). Exit the cafe and go next door to the saloon. Look at the doctor, then take the whiskey glass. Head out through the back door. Take the ice pick from the barrel, and the elixir from the broken caravan.

Now head south to reach the church. Open the door and get the candle wax, then look in the keyhole and take the key. Walk east, then south to find the school. Take the ladder from the slide. Next go west twice and enter Chester Field's. Talk to Willy and take the paper bag before leaving and heading east. Use your key to unlock the pharmacy, and go inside.

Pick up the purple tube of preparation G from the left display. Walk behind the counter by lifting the bar on the left, and Penelope Primm will enter and give you a prescription. Go to the lab in the back. While you are here, head upstairs to your bedroom. Open the trunk and take the gunslinging outfit, then open the nightstand and get the desk key. Finally, open the dresser drawer and take the claim check. Go back downstairs. Use the desk key to unlock the desk, then open it and use the same key to unlock the drawer. Take the letter and read it. Now back to the prescriptions!

Use your lab shelves. Get the graduated cylinder and put it on the table. Now find the Pepticlymacine Tetrazole and put 40mL into the cylinder. Replace the drug, then get an empty medicine bottle and put it on the table. Pour from the cylinder into the bottle, then put a cork in the bottle. Head back out and give it to Penelope, and she will leave.

Next comes Mom, who gives you a new prescription to fill. Read it, then go through the door and use the shelves. Put the cylinder and the beaker down on the table. Get the Bismuth Enterosalicyline and measure 30mL into the cylinder. Next get the Phenodol Oxytriglychlorate and put 15g on the scales. Pick up the scales plate and empty it into the beaker, then pour from the cylinder into the beaker. Take a glass rod and stir the mixture, then pour from the beaker into the pill machine on the left. Get an empty bottle and use it on the pill machine 7 times. Put a cork in it, then go out and give the bottle to Mom.

Madame Ovaree will bring in yet another script. Try to read it, then use the whiskey glass on it, and you can make out the word testosterate. Leave the pharmacy and head west twice, then into the saloon. Give the prescription to the doc, and he will give you a replacement. Read it to make sure, then return to the pharmacy, go through to the back room, and use the shelves. Put the mortar and pestle down on the table. Measure 15g of Bimentylquinoline on to the scales, then tip it into the mortar. Next measure 15g of Metyraphosphate on to the scales and tip that into the mortar as well. Use the pestle to grind the mixture. Now lay out 6 medicine papers on the table. Get the spatula and use it to put 5g of powder on to each medicine paper. Fold each of the papers and put them all into a box. Go back out and give the box to the Madame, and she will head off.

Finally, Smithie will enter and ask for some preparation G. You already picked this up earlier, so just give it to him. The sheriff will now come in a close down your pharmacy.

Head west several times to visit the Blacksmith. Pick up some coal, and take the rope and leather strap from the wall. Put the coal in the bean can, then use the ice pick on it to make some holes. Add the leather strap and you have a mask. Use this on yourself every time you are running out of air. Approach the horses and use the paper bag on them to catch a sample of gas (time it when the tails raise in the air). Now return to your pharmacy and enter the back room.

Fill the alcohol lamp with your elixir, then light it with the matches. Put the gas spectroscope in front of the flame, then use the paper bag on the fire and look at the readout. Turn the lamp off. Put the cylinder and beaker on your table. Measure out 40g of Sodium Bicarbonate on the scales and 15mL of Furachlordone in the cylinder, then pour both into the beaker. Now put 45mL of water in the cylinder and 5g of Magnesium Sulfate on the scales, and add the water, then the powder to the beaker. Stir it with a glass rod, then pour into a bottle and put a cork on it. Now head outside and pour the medicine into the water trough where the horses are drinking.

Go to the saloon, and give your money to the bartender, in exchange for lots of beer. Use the church key to open the bottles. Now go back outside and head west 3 times. Pick up a few snails, then use the beer bottles on them to divert them away from town.

Talk to the guy sitting on the anthill, then use your ladder on him to save him.

Visit the outhouse behind your pharmacy to see the people queueing up. Turn on the faucet from the water tower. Now fill one of your beer bottles with water, and turn off the faucet again. Drink the water, and you will discovered it is contaminated. Go back west over the bridge and get your ladder. Go to Mom's and give her your snails, then return to your pharmacy. Collect the Bicarbonate Soda from outside, then go in, and straight back to the lab.

Use the shelves. Get down the cylinder, test tube and a medicine bottle, then light the flame with a match. Measure 25mL of Bismuth Subsalicylate in the cylinder and pour it into the test tube. Now measure 5mL of Orphenamethihydride and add it to the test tube. Heat the mixture over the flame, then pour it into the medicine bottle. Cork the bottle, then head straight back to the outhouse. Put the ladder on the side of the water tower and walk up. Pick up the ladder again, and lean it against the front. Climb up half way, then look at the rope you are carrying. Use it in your inventory to make a lasso, then throw that over the spire on top of the tower. Climb the rope, open the hatch and pour in the medicine.

Leave your pharmacy and go right to see the fire. Place the Bicarbonate Soda on the right side of the see-saw. Get on the swing and use it 3 times to reach maximum height, then jump to the roof of the schoolhouse when you are close to it. Now jump to the left side of the see-saw to put out the fire. Head to the whorehouse (south from the saloon) and you will see the sheriff and banker plotting. Go inside and take the postcards on the table, then when the Madame arrives the scene will end.

Go downstairs and talk to Srini, then leave your pharmacy and pick up the horse dung from the street. Go west and enter the barber shop. Give the barber the French postcards and the claim ticket, and he will give you your boots and some laughing gas. Leave the barber's and enter Mom's Cafe. Take a cup of coffee from the machine. Now put the horse dung on the floor and quickly leave. Head into the saloon and out through the back door, and take the apple pie from the window will Hop is still cleaning inside.

Go south and west to the graveyard. Take the shovel and dig up the grave next to it. Take the key, then cover the grave again. Get a lump of clay from the ground. Now go to the bank and give the banker your key, then take the guns and scarf from the safety box. Go and visit the sheriff and give him the apple pie and coffee in exchange for bullets and a gun cleaning kit. Clean your guns with the kit, then load the bullets. Go west and north to reach the area just outside the graveyard. Srini will be here, so talk to him, then put the bottles on the fenceposts and start shooting.

When you are finished, go to Chester Field's and try to give the lump of wax to Willy. Head outside and straight back in again, then get Willy's pocket knife and use it on the wax, then use the clay on the wax ear to make a mould. Go back to your pharmacy and take Srini's medallion from the wall. Go back to the lab and use the shelves. Light the alcohol lamp and use the wax mould on it. Next put the medallion in a crucible and melt it on the lamp. Use the mould on the crucible, then take the ear. While you are here, open the desk, then the drawer, the look inside and take the letter. Go back to the front of the store and talk to Srini, then go upstairs.

Act 4: Showdown at the Hallelujah Corral

Head west to the saloon. Talk to Chester outside, then go in. Talk to the guy playing poker in the black hat. Now look at the poker game, then look at the third hand coming up from beneath the table. Grab it the next time it comes up and you will jump behind a table to take cover. Shoot at the brass rail at the bottom of the bar behind you to take care of Ace.

Leave the saloon through the back door and climb the stairs to see a group of cowboys. Put the cannister of laughing gas on the balcony, then go back down the stairs. Head south, west and south twice to reach the whorehouse. Stand on the right in the gazebo, then shoot the canister. Now head north to Main Street to meet the Lever brothers. Shoot them in the arcade sequence that follows. Kenny will arrive next - shoot him, but he will shoot off your ear. When he leaves, get the scarf from around your neck and use it to stop your ear bleeding. You automatically head to the schoolhouse.

Drop your guns when Penelope tells you to, then quickly take the slate from next to you. When you are trapped in the cellar, rock on the chair until you fall over. Take the ear and use it on the floor, then use it to cut the ropes. Head upstairs and grab the sword, then corner Penelope in the sword fight. When Kenny enters, throw the ear at him to complete the game.