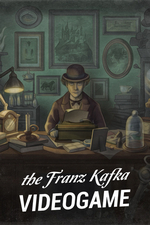 The Franz Kafka Videogame is a surreal fantasy adventure based loosely on the novels of Franz Kafka. It comprises 4 acts following the absurd exploits of Dr K and Zamza. There are 12 Steam Achievements, all documented in the walkthrough below.

Open the door to let the lady inside, then click on your pocket watch.

Raise the curtains, then click on the cardboard box to open it, and examine the ears inside Curious. Next click on Dr K once, the large 8-ball twice, the wooden sign with the arrow once, the cloud once, and then the little girl's lantern - this should reveal the silhouette of a rabbit Pioneer.

After the lady leaves and a dog enters, take the envelope from its mouth. Pull out the message, then adjust the 3 sliders to create a continuous path from left to right (the first slider goes up, the second slider goes up further, and the third slider goes all the way down).

When you see the board game, click on all 3 colored pieces, all 8 letters, and the horse. Now roll the die twice, and the horse will block your path. Click on the vertical letter between 2 of the buildings to reveal a brush, then use the brush to create a new path. Roll the die twice more, then roll the new die and a coffee cup will appear. Click on this, then click on the open garage in the bottom house Meticulous. Quickly roll the die while the car is out of the garage, and you will be able to move on. Keep rolling to finish the game.

In the alleyway, click on the pigeons, then talk to the astronaut.

You w ill awaken on a train. After talking to the ticket inspector, you need to sign a letter with a strange typewriter. Type CH, then turn the wheel on the right and type EAT Novice.

You will now see a sliding puzzle. There is an achievement for arranging the puzzle in numerical order Logician:

Now click on the light to turn it off and you will see another pattern. You need to arrange the tiles to form a complete circle:

Talk to the Stoker.

Raise the curtains, and you will see a guard pose a riddle to a fox. Look carefully to see it is composed of 4 layers of numbers - from the inside to the outside they are 3, 7, 8 and 9. Pull out these petals Competent.

A Report to an Academy

Click on each of the 10 television sets until together they display a large purple face. After a conversation, use the four middle television sets to create a white arrow pointing down.

Take the paper from the wall, and pull out the darker paper you can see behind it. Drag this over to the left middle of the larger paper to create a continuous path.

Ring the bell on the desk to summon a diver. Now you need to adjust the paperwork to spell out ALGUFEQ - in the handwriting used, this resembles GRANTED written upside down. Examine the radio on the desk and change the frequency to 91.6 to return to the desert Proficient.

Open the door to let Felice inside.

Raise the curtains, and you will see a battle. To defeat the first enemy, click on his helmet, then on your sword. To defeat the second enemy, just drag his health bar to the right.

After initially visiting the crime scene with the monkey detective, you will break back in at night time. Examine the monkey toy on the dresser - it has a Pi symbol on its fez. You need to get the monkey to play its cymbals 3 times, then 1 time, then 4 times, by pulling its cord different distances. Take the ticket out of the monkey's mouth.

When you see the second board game, just follow these instructions:

In the restaurant, click on the waiter, then on the origami crane to view it closely. Unfold it, then click on a series of pictures to transform the paper: Fox, Dinosaur, Butterfly, Fish, Flower. Click on the advertisement.

Drag the letter N over the padlock, then pull the zipper up to open the exhibit. Go through the doors.

After the credits, you see see a night sky filled with stars. Click on the blinking stars to write the number 916 Discoverer. There is another achievement for completing the game without hints Unaided. The final achievement is for using a hint on every section of the game Erudite (you can go back and do this afterwards, by skipping between levels).