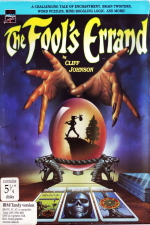 The Fool's Errand is a game consisting of a collection of puzzles that together tell a story. The following walkthrough gives the solutions to the normal puzzles in the order they are accessible from the menu system, not in the order in which they are available to play in the game. Once you have completed The Sun Map, you can then progress from the normal scroll puzzles to the treasure puzzles listed at the end. After you have completed each scroll puzzle, make sure that you look at the map and write down which new part of the map was revealed (otherwise it will be very difficult to complete the map at the end).

After all initial scroll puzzles are solved and all map pieces are present, you need to construct a path from the first location (the hilltop with the sun) to the ending location (the heart). The pieces need to go in the order that the corresponding puzzles appear in the completed scroll. Once the map is completed the Treasure Puzzles are available.

Select the bold letters from the following: areYOUReyesBLIND to reveal the letters BOW.

The Page of Wands

Run your mouse along the top of the screen, then type in the hidden phrase "To the east".

The Knight of Wands

Using the initial clue FBUMSFF = SADNESS, substitute letters to reveal the following: "Well," he began, "I met a page on my travels, and he was seeking the pyramids."

The Wheel of Fortune

This is like a simplified version of a poker game, where the first to a total of 700 points wins. You have to beat the old man just once to progress. You get to choose a card to add to your existing two cards to make the best hand possible. The following are the possible hands:

This is a maze where panels will open and close as you move towards them.

Type the phrase "Rat ivy" in the boxes.

The Queen of Wands

The 3 words to read horizontally from top to bottom are sad, ice and new. The letter S will be highlighted.

Using the initial clue PUGR OQUFEZ = MANY DEATHS, substitute letters to reveal the following: "I am afraid that I am not the messenger you expect, but I was told to warn you that two ships approach from the south."

Place the tangram pieces into the grid to show the phrase "I am here at the Queen's request".

This is a jigsaw puzzle that shows the erection of an elaborate building, with the letters MYR featured.

There are only three letters missing from the scene, and the correct order is FIE.

Follow the path of the eyes from start to finish to complete the maze and reveal the puzzle for the 2nd Key of Thoth. Here you must click on the four orange/pink static squares while the rest of the screen is animated.

The Maze of Hedges

Just use trial and error to eventually make you way through this maze, revealing walls and "whispering winds" that teleport you elsewhere as you go. There is only one correct path through the maze.

The Queen of Pentacles

The 3 words to read horizontally from top to bottom are arm, too and ebb. The letter S will be highlighted.

Place the tangram pieces into the grid to show the phrase "The four sages".

This is a jigsaw puzzle that shows pyramids during night and day, and a letter E on the right side.

You need to unscramble words that relate to wedding anniversaries. The answers are wood, bronze, paper, silver, leather and turqoise, and they reveal the clue Red Urn.

This is a jigsaw puzzle that shows two silhouettes running toward the sea at night, and the initials KD in the sky.

The Page of Cups

You need to unscramble types of fish. The answers are perch, trout, minnow, sardine, goldfish and halibut, and they reveal the clue No Ship.

The Knight of Cups

Using the initial clue GPHVI AFPJJ = DEATH KNELL, substitute letters to reveal the following: "Alas I do he sighed. Your knight says that no ship has landed upon your shore."

Use the first letter of each word here to make the phrase "Leap for joy".

Place the tangram pieces into the grid to show the phrase "The rainbow of hope".

The Queen of Cups

The 3 words to read horizontally from top to bottom are two, oil and end. The letter T will be highlighted.

This is a jigsaw puzzle that shows the words fifteen, two and twenty, and two figures, one grabbing at 7 cups.

Place the tangram pieces into the grid to show the words fourteen, eight and fifteen.

You need to unscramble pairs of interlocking words. The answers are fourteen/three, twelve/two, nineteen/one, seventeen/five and thirteen/six. The words thirteen and six will be highlighted.

Select the bold letters from the following: MUCHtoACCOMPLISH to reveal the letters AIH.

You need to unscramble the horizontal words. The set on the left are miss, twig, idea and root. The set on the right are weep, your, hair, area, worm, iron, lard and soup. This reveals the words star and pyramids.

Place the tangram pieces into the grid to show the phrase "Mystical chant".

You can only attempt this puzzle after you have collected the 4 Keys of Thoth (from Three Ships, The Humbug, Justice and The Hermit). For the first part, click on the same four areas of the screen as you did in The Humbug. Next drag the bars across the screen as in Justice, and finally draw the same pattern as you did for The Hermit. You will now see the Treasure Puzzle, but cannot access it yet.

Each letter in the hidden phrase is the letter that appears in one of the words below but not the other. Therefore type the phrase "Do not try to stop us".

The Knight of Swords

Using the initial clue LSIG HARUY = GRIM TALES, substitute letters to reveal the following: "I bring a message from your Knight. He tells of an attack by eight magical wands."

Without any initial clues, substitute letters to reveal the following: "A giant wheel stood near the pyramids, and I saw three mystical words, one atop the other."

The Queen of Swords

The 3 words to read horizontally from top to bottom are raw, owe and bee. The letter E will be highlighted.

Select the bold letters from the following: TENglowingSWORDS to reveal the letters PUS.

Place the tangram pieces into the grid to show the phrase "Pentacles, cups, swords, wands".

Run your mouse along the top of the screen, then type in the hidden phrase "I take no credit for this".

Select the bold letters from the following: gazeINTOtheSANDS to reveal the letters EZC.

This is a jigsaw puzzle that shows two characters silhouetted, with the letters RW on the beach.

Without any initial clues, substitute letters to reveal the following: "To secure that which cannot be gotten, you must invoke the points of a compass and convince it to come to you."

You need to click on the white eye symbol without touching the red eye symbol.

This is a jigsaw puzzle that shows men and a horse on the beach, and ships in the water, with a reflection of the letters RW in the water.

The major task here is to identify the names of the 14 treasures, and enter them in the Book of Sloth (the book with the eye on it) on the right side of the Sun Map.

The Kings are Confused

Within the Kingdom of the Pentacles

The name of this treasure is determined from the 8x3 grid on the boundaries of The Page of Pentacles and The Merchant. Find the 3-letter words in the 4 scroll sections before The Merchant (YES, ERA, SIP, TOP) and the 3-letter words in the 4 scroll sections after The Page of Pentacles (AIH, ROI, MYR, FIE). Enter these in the grid, and the highlighted letters will read Star Sapphire.

The Queens are Confused

From the scroll sections for each of the queens, get the words CLAC, TRSC, YNAL and EKE. Unscramble these letters to get Crystal Necklace.

Within the Kingdom of the Wands

This treasure is identified using the 4x6 grid on the boundaries of The Canopy, The Watchtower, The Fighting Boys and The Stone Wall. Find the four 6-letter phrases in these scroll sections and enter them in this order: RED URN, RAT IVY, BAD YAM, NEW GNU. The highlighted letters will read Ruby Ring.

The Path of Six is Disguised

Starting from Three Ships, note the references to the first of six, the letters RW, and chasing a fish. The Page of Cups describes a fish chase, KD and a woman with 2 swords. A woman with 2 swords is found in The Chant, along with the letters EZC and a family on a boat. Read The Boat to find YH and reference to a broken wheel. Next comes The Chariot, with a broken wheel, HA and a thief stealing seven. Finally in The Thief, find the letters RW and a reference to the last of its kind. This gives the letters RWKDEZCYHHARW. Use the first horizontal translation area on the Sun Map and enter these letters, to be given Onyx Medallion.

The Mystic Chant is Disguised

Read The Stream scroll to get the mystical chant: NZSLTZMBHGZUU. Use the second horizontal translation area to obtain Mahogany Staff.

The Knights and Pages are Confused

Collect the eight green capital letters corresponding to the map locations of the four knights and four pages: DSULTDOG. Unscramble these letters to get Gold Dust.

The Maze of Thorns is Disguised

Go to the Maze of Thorns. You need to first identify the eleven monsters scattered around the maze, then you can start collecting items to get past them. You will get 3 keys along the way and use spells to get past 3 other monsters blocking the exit (you have to go slightly north of the fire demon to disrupt it). You will be given the letters XLPFYVXENPAZGZJ. Use the first vertical translation area on the Sun Map to reveal Diamond Bracelet.

The Hierophant is Disguised and Confused

If Justice Be Done

In the Justice scroll section there is a reference to the Emperor taking what is his, from what is hers. If you subtract the letters WIF DOVE from the phrase VILE SHADOW FIVE CIRCLE, you get the letters VILESHACIRCLE. Unscramble these letters to reveal Silver Chalice.

Within the Kingdom of the Swords

This treasure is identified using the 5x5 grid on the boundaries of The High Priestess, The Sentry, The Dream and The Nightmare. Find the 16 letters in The Tower, Death, The Dead Warrior, The Warrior and The Singer scroll sections, and the 9 letters displayed when the Wheel of Fortune is selected on the Sun Map. Enter all of these letters in this order: QM ZA, PUS BOW, EG LI OC, ONO ROR DND. The highlighted letters will read Magic Sword.

Within the Kingdom of the Cups

Find the puzzle where you must insert 12 horizontal words, on the borders of The Family, The Children, The Couple and The Dancers. Insert all the words from the scroll that have not yet been used: JOY, GRIEF, WHEAT, RICE, LEAP, HEX, DEAD, CARE, ERR, CORN, WISH and NINE. The highlighted letters will read Jeweled Crown.

Eight in the Land are Disguised

Follow the path and collect the eight large yellow letters: DRBUFVYU. Put these through the second vertical translation area to get Amethyst.

You then have to type FINALE at the dos prompt to access the last part of the game, which all happens automatically.