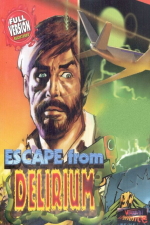 Escape from Delirium is a 3rd person adventure game that starts with the protagonist, Paul Cole, witnessing a crime. On the way to a court appearance your plane is hijacked and ends up crashing. After surviving the crash, the real adventure begins.

The Living Head of Stone

Pick up the set of pulleys and combine them with the string in your inventory. Head east and pick up the hook, then use this on the brick wall. Use your string and pulleys on the hook. Head north through the doorway and look at the screens.

Enter the tail section of the plane and pick up the metal piece (crowbar), and the broken glass from the window. Enter the storage room at the back of the plane. Pick up the glass from the floor and use it in your inventory to remove the rubber band. Use your crowbar on the box in the corner and you will get a parachute and a machete. Return to the plane, then go outside and head north into the jungle.

Use your machete on the bush, then follow the path north. Pick up the root (stick) near the garbage cans. Use your crowbar on the heavystone on the right and pick up some insects from beneath it. Next use the crowbar on the smaller stone on the left and pick up the little stones. Head east and pick up the bough between the large trees. Combine this with your piece of rubber to make a slingshot, then return west and head north. Use your slingshot on the bird in the tree. Give your insects to the bird, then look at the bird's nest and take it to get some worms and a silver ring. Now climb up the ladder so that you can see a village to the north. Head southeast, east and north to reach the main game map.

Go north and talk to the girl at the ticket-office until she lets you through. Continue north into the funhouse, then go northeast. Pick up the bucket of dry ice, then go east and pick up the dagger from Admiral T's body. Leave to the northeast, then continue east twice.

Use the slot machine to get a gumball, then use it in your inventory to chew it. Enter the fortune-teller's hut and talk to her about everything. Pick up the flusher (plunger), then go back outside and head west.

Take the flintstone from near the inspector's feet. Look at the notices, then pick up a form before talking to the inspector. Use your dagger on the corpse hanging from the pole. Look at the unconscious spy and you should get a tool. Continue west and enter the shop on the left. Talk to the rosary maker about everything. Use your chewing gum on the red gas tank, then leave and head east twice. Use your order form in the mailbox on the right to get some song lyrics, then go north.

Go west twice to reach a clearing. Use your string with the bough beneath the wires, then use your telephone tool with the telegraph wire to get a phone number. Use your flintstone on the large stone to the left to make a fire, then use your stick on the fire. Go north, east and north.

Use your burning stick on the roof of the souvenir stand. Go west twice and enter the rosary maker's shop then talk to her again so she will leave. Take the colored bowl from the left shelves, and the nylon cord from behind the counter. Head outside and go west, then talk to the rock connected to the hose (dial 30354 and convince the mechanic to fix the light).

Return east and open the library door then go inside. Pick up the black cloth and another colored bowl that was beneath the cloth. Also take the green Sanctification book from the left. Look at this book in your inventory, then exit the library and go east twice and north.

Head northeast and use the bowls on the columns around the statue. After the vision you will automatically return to the fortune teller.

Go outside and head north.

Head southeast and pick up the pole behind the bus stop sign. Combine this with your cord and worms to make a fishing pole. Enter the cave in the mountain. Swim to the small drain on the other side of the lake, then use your bucket of dry ice on the pool in front of the left tunnel. Head through the tunnel and pick up the ladder. Push the hanged man, then look at him.

Return west, then enter the right tunnel. Use your slingshot on the elevator switch, then go down to the door and head through. Push the blue diamond on the left stand, then use your piece of glass on the right stand so you can continue east. Use the tap on the pipe, then use your plunger on the open end of the pipe. Open the bulkhead and climb down.

Head east and pick up a shell, then open this in your inventory to find a pearl. Continue east and talk to the spirit twice to cover all options. From here, go north twice, up the ladder, south, west, up the elevator, west, south twice, west and north.

Use your fishing pole in the well to get a fish. Walk west 3 times and open the door, then go inside and talk to the cook. Give your pearl to the cook and you will get a bowl of soup. Leave and go east 3 times and north.

Head southeast, into the cave, through the lake and into the right tunnel. Go through the door, east, down and east twice to return to the spirit. Use your fish in the bowl of soup, then give it to the spirit. You will receive the mystic ring and end up back with the fortune teller.

Go outside and head north.

Head northwest, then go west over the bridge and north towards the temple. Read the sign over the secret door in the temple, then place your MEJ script (lyrics) on the stand next to the guitarist. Plug the guitar into the amplifier, then go through the secret door. Put your mystic ring (not the silver one) on the silver hand, then step on the teleporter.

Go west and pick up the screwdriver, loose wire and accu battery, then continue northwest into the bathroom. Use the pipe below the toilet tank on the open pipe on the left to connect them together. Use the chain to flush the monster away. Now look at Professor Smith before taking his hand. Return north and northeast and use the Professor's hand on the security system.

Pick up the note and read it, then pick up the colored test tubes from the left table and the empty test tube from the right table. Use the empty tube with the green liquid on the right, then teleport out of this room and teleport again to return to the temple. Head northwest, southeast, east, northeast and north.

Use your screwdrive on the box-tap on the side of the well to get a pump, then go west twice and into the library. Look at the files on the desk to find out who borrowed the Herbizide book. Leave the library again and go east twice and north.

Go northwest and then northwest again. Pick up the Herbizide book, as well as the shovel and money (you will also get a pen with the book). Read the book in your inventory and you will make a destructive liquid from the test tubes. Go north, west and north into the temple, then go east through the brown doorway to a cemetery. Use your shovel to dig up the nearest grave and you will get an inspector's ID. Dig up the King's grave to the right and you will find concrete. Go back inside, then head southeast, east, northeast and north.

Head west and give the ID to the inspector, then open the showcase and take the pneumatic drill. Return east and north.

Enter the supermarket and take the hair-dryer from the shelves on the left (you will also get a barcode). Use your pen on the barcode, then use the hair-dryer with the girl at the till. Go back outside and head east.

Go southeast, into the cave, through the lake and into the right tunnel. Go through the door, east and down. Look at the abyss near the dripping water, then use your ladder in the abyss and climb down. Next use your hair-dryer on the frozen object to get a brain.

Climb back up twice, then go south, west, up the elevator, west, south twice and west. From the signpost again, go northwest, west and north, then east to the cemetery. Use your pneumatic drill on the King's grave to get a key. Head back inside, then north to the altars. Use your key in the left altar's keyhole, then go down the secret stairs. Pick up the note from the floor and read it, then climb back up. Return south, into the secret room and on to the teleporter. Go north from here and use your pump on the pool to drain it. Climb down this ladder and charge your accu (battery) with the outlet here. Climb back up and head northeast. Use your loose wire on the exposed wires on the wall, then go through the hole that opens up, and through the north passage. Use your destructive liquid on the thorn bush and you will get a heart.

Return to the underground, then go west, northeast and west twice. Use your charged battery with the computer on the right, then pull the switch. Now you can pick up the flask hovering over on the left, and open it to find a spirit.

Go northeast, north, northwest, into the hole in the wall and then to the east. Use your note from beneath the altar on the combination lock, then look at the sword to see a signet symbol. Back up and go west, northeast, west and on to the raised teleporter. From here go north twice and down the secret stairs. Look at the large plate on the wall to see the signet symbol again. Use your crowbar on the plate, then pick up the skeleton.