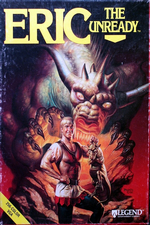 Eric the Unready is a comedy text adventure with graphical elements by Legend Entertainment. You play as Eric, an underqualified knight, who is sent to rescue the Princess of the realm from the evil clutches of her step-mother.

Go west, open the chest and take everything, then go east, northeast. Read the paper. Tie the rope to the hook, then go down, eat shit, kiss the pig, and give hog-wild to the pig. Go up, then southwest and kiss the pig again, then go west.

Read the card, wait twice, then take everything. Go east and read the newspaper. North, south, wait 5 times, west, read the sign, west again and give the card to Giovanni. Answer the copy protection questions, then wear your cloak. Look in the pocket, take the packet you find and read it. Now go east and south, then get some water with your helmet. Head north 3 times, then talk to the guard and take the kindling. Go south, plant the bean, water the bean and climb the beanstalk - you will get a gold coin.

Walk south, south, west. Go back to the east and put the kindling in the fireplace, then light the kindling. Head west then north and give the gold coin to the bard. Wear the earmuffs and wait twice. Go north, north, up, wait twice more, then go south. Take the banana and throw it in the pond.

Read the paper, then go west and give the float to the tree. Walk west, move the branches and open the door, then go down, open the box and read the mail and the sign. Head west, northeast, southwest, east. Open the door with the pickaxe. Go east and pull the rug, then open the trap door to be given a skeleton key. Unlock the case and take the beard, then go up and search the bones. Walk back down, then west twice and wear the beard. Kneel then go south. Give the mail and the license to Ed. A carnival will be created.

Walk west and win the memory game to get a magic slingshot. Now walk southwest and get some pity money, then northeast and buy a starter rock. Go back to the southwest and push the lever, then sit. Load the slingshot, press the green button, then shoot the red button. Stand and take the pitchfork. Tie the cord to the branch, then jump. Walk east, east, up, drop the rock, then go up twice.

Head north and read today's news. Talk to Bruce then Howard. Read the sign, book and coupon, then give the coupon to Bruce. Read the menu and order Mead Lite. Now walk south, west, west and north. Take the berries then head northwest and give the Tort-Ease to the turtles. Read the proclamation, then go east and give the mead lite to the two-headed oaf. Now take the branch while the heads are arguing. Walk back to the west then go up the stairs. Light the branch and go back down. Melt the wax and press the blob on the key. Go back northwest, east and north, and give the blob to Howard. Now head south, west, northwest and open the door. Win the gameshow to get the wrench.

Read the newspaper, then listen before heading north twice. Read the sign and wait for 3 hours, until you hear a tale about a dragon. After this, go south and northeast. Shoot the target until you have won all the prizes. Now go southwest, west and look at the woodcuts, then the red shell. Talk to the musician. Leave to the east, then walk north and west. Take the band and the leech, then close the shade. Put the band on the viper, and the cord on the aardvark. Take the marble - the troll will catch you. Stand on the board and take the marble again. Head east and wait for 2 hours. After Lily sings her song, keep waiting and some jugglers will appear on stage. Throw the leech to them and they will leave.

Take the gloves, then head south and wear them. Climb the maypole and you will get the boa. Head north twice and give the boa to Lily, who will give you a weed and another quest. Now go south, south, west and wait twice. Give the reed to the musician in exchange for his glasses. Wear the glasses and play the game - turn over the shell with the correct color. Walk east 3 times and sit on the whoopee cushion to gain a fool's cap.

Spit, then wait 3 times and spit at the boy. Wait 6 times then go west. Give the apple to the chef, then take the apron. Look at the woodcuts. Walk northeast, give the woodcuts to the barker, then walk back southwest. Go south and wear the apron and cap. Go west, then shoot at the tail repeatedly until you hit the dragon. Take all.

Crowbar of the Apocalypse

Read the paper, then moon the unicorn and take the leaf. Go west, then take and wear the robe. Look in the pocket and get the hanky. Ring the fourth bell, then give the newspaper and hanky to the girl. Wait twice and you will be kicked out. Go west again, and put the leaf and hanky in the bowl. Take the chow. Ring the fourth bell again, then wait twice and you will be accepted. Walk north, then wear the ring and get in the vat. Wait twice. Give the book to the girl. Wait 3 more times, then go north into the mouth. Read the sign then wait.

Walk southwest then west. Talk to the goddess. Head north, then listen twice. Walk south, east, south and show the note to Clio. Read the note and wait, then give it to Morty. Head east and take the costume, then go east again and read the board. Walk north into the library, then go south twice and talk to the Repairgod. Give him a token, then put the penny in the slot to get a can of nectar. Go north back into the library and read the list - choose "Setting up Sodom/Gomorroh". Read the book, then go south twice and give the book to Richard. Walk north and read the book. Now go east and push the crank, then take the slimewig.

Go north, west, north. Pull the dragon tail, then light the candles. Head south and take the key. Now go east, northeast and give nectar to the god 3 times to make him leave. Take the egg, then go southwest and drop the egg. Wear the costume and the woad. Hold the book, stand on the egg, and eat the slimewig. Turn around twice, then squawk. Climb up the stairs, then open the lock and take the crowbar. Now just wait.

Read the paper, then walk north on to the raft and give the berries to Zulu. Wait 5 times, and you will lose your crew. Go northwest to board the raft again (this time in the captain's chair). Go to Milligan's Island. Take the umbrella, then wait. Take the bottle, then look inside it to see a matchbook. Get it and look at it, then join the dots. Put the matchbook in the bottle, then the bottle in the swamp. Wait 4 times then take the bottle again. Look in it, then take and read the certificate. Sit on the raft and head to Treasure Island. Read the sign, then climb over the fence and pass the exam. Sit on the raft and go to Monkey Island.

Call the banana, then say yoohoo. Give the banana to the monkey so you can take the coconut. Sit down again and go to Lilliput. Put the umbrella and coconut on the belt, then flip the lever. Put the dragon on the belt. Now you can sit and head to the iceberg on the bottom left of the map and the dragon will melt the ice. Sit and go to Gnoll Island. Get off the raft and go east. Put the coconut on the guillotine. Put the umbrella and rum in the coconut. Walk west then northeast. Go back to Phantasy Island and give the coconut to Daddoo.

Read the paper (last time!). Put the pitchfork in the tar. Throw the crowbar at the bird, then put the steak on the black eye. Cut the lightning with the bolt cutters, take the candygram and turn the moon with the wrench - you will end up inside the castle. Turn the hourglass, then take the eyeballs and put them in the skull. Read the book, then hoot - the answer to the mirror's question is IIIVX (add the roman numerals read backward). Go west and look in the hole, then go west again. Take the makeup and read it, then go east and wait for 1 hour. Wait for whatever interval is required to make the time exactly 10:30. Put the makeup on the chain, then go west and open the window. Ride the broom twice. Open the door and go up. Read the candygram, then the fine print. Wait 30 minutes, then give the candygram to the witch. Take Lorealle and go out of the castle. Blow the whistle, then get on the duck to complete the game.