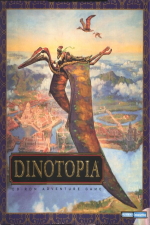 Dinotopia is an adventure game based on the book by James Gurney. You play as Nathan Drake, a survivor of a shipwreck that lands you on an island inhabited by dinosaurs.

Search the beach thoroughly to find rope, a conveyor belt, and a purple shell. Enter the beached ship and take the candlestick and crowbar. Walk back to the closed shell and pry it open with the crowbar, so you can get the pearl.

Head up the path through the jungle to the Hatchery. Click on the door near 2 children, then talk to the old woman and get the dinosaur alphabet. Use this on yourself and take note of the letters (decipher messages later on). You can now talk to the other characters and dinosaurs. Go back to the first house and use the conveyor belt in the gears. Show your sister's picture to the people and you will be told of Pumicetown. Talk to the dinosaurs attached to the carriage and you will be there.

Play cards with the dino in the booth - you must first place an offering (eg. candlestick) in the offer box. When you win, you will receive a metal item. Head to the northern edge of town, and walk down the stairs into the smithy. Place the key mould on the platform, then put the metal item into the hanging pot. Push the bellows to heat the metal, then use the gloves to tip the pot (and fill up the mould). Use the tongs to place the mould into the water, then take the key. Talk to everyone and show them the picture of your sister - you will be told to go to Waterfall City. First go back to the Hatchery, then walk back to the beach. Use the key to unlock and open the chest, so you can take the timepiece. Go back to town and take the carriage to Waterfall City.

In this city, look for blue octagonal squares in the pavement - you can enter these places. After meeting your dino friend / tourguide, go across the bridge, and straight east to find the museum. Talk to the curator about the gramophone and your sister, then enter the slide room. Clean the slides, dry them on the cushion, then look at them in the projector. Leave again, and take the gramophone base. Exit the museum and west over both bridges (a long walk). Enter the building by clicking on the right-hand door. Listen to the notes the dinosaur through the window sings, and repeat the pattern on the xylophone. Continue until you get the recording device. Head east over one bridge, then south, and enter the greenhouse. Talk to the dino, then water the plant just to your north, cut the flower with the shears, and take it. Head all the way back to the carriage and go back to Pumicetown.

Go back to the smithy. Use the same process as before to melt the key and make a gear. If the gramophone does not assemble itself (it should!), then click on the individual components in turn. Give the gramophone to the dinos pulling the carriage, and a new location will appear on the map. Go there: The old ruins...

Head south, then west to find the big dino. Show him the picture of Constance to get his insignia (tusks) and find out about the World Beneath. Head north to the ruins, and walk through the hole in the far northwest wall. Take the east branch of the path to find stairs going down. Walk through two screens of caves, then through a mountain pass until you reach a woman. Talk to her and show her the pictures. Stand on the carpet and wait until the flags are still for a moment. Walk off the cliff to land on a flying dino. Fly to the Savannah.

Talk to the dino at the factory entrance. Walk to the entrance to the machine room in the northwest corner. Enter and pull the levers to get the same musical pattern as in Waterfall City. After heading downwards, put the three slugs in the three pipes, then take the scroll. Exit the factory and fly to Treetown.

Head directly east to the water's edge and find the fireweed. Head directly northwest (up) to find two large trees, one surrounded by bees. Go to the closer tree and click on the sap-collecting cup. Go back to the other tree and take the moss. Head east until you find a ladder to climb up into a tree. Start walking east and keep walking until you find another downward ladder. Climb down and talk to the big dino. Put the moss, then the fireweed in the empty flask, then climb back up the ladder. Give the flask to your little friend and he will cure the big dino, so you get a prism. Exit and fly to Alpine.

Head north, and follow the path of footprints and other markings in the snow up the mountain. Make sure you cross the slippery ice at the bridges, or you will have a long walk back up. Generally, you need to head northwest (straight up). Talk to the monk in the Temple of the Sky, to get a red sunstone. Exit and fly to the desert.

Enter the oasis to the east and talk to the big dino. Escort him northwest to his father, and you will be allowed into their home. Climb the ladder, go north through the next room, down the ladder, and north into an area with stone columns. Place your prism on the central sundial, then read the scroll you got from the Savannah. Arange the central stones of the sundial according to the scroll and make sure the SW and SE stones are lit (click on them). The scroll says "give your time to another", so give your timepiece to the old dino. Go back to the sundial and descend the new ladder to enter the submarine.

Remove the used sunstone and replace it with the one you received from the monk. Click on the right-side levers to activate the sub. Drive the sub down and to the left, following the passages as far as possible. Move the fish / sharks with electricity, and the jellyfish / tentacles with smoke. Ascend into a new temple. Move sub near to the open doorway and walk through. When you have a decision to make, stay in your new world.