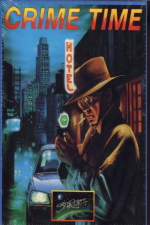 Crime Time is a first-person mystery game. You play as a guest in a small hotel where a murder has occurred. You need to prove your innocence by discovering what really happened.

From here, walk north 4 times, south and then east to the dining room. Open the kitchen door and head north. Show the greenback to Alex and he will give you some wine and some coins. Return south and close the kitchen door, then use your coins in the jukebox. Now head northeast and take the security key. Go southwest, west and south. Use the security key on the west door, then go west and take the toolkit and flashlight. Go back out to the east, then head north and west. Use the toolkit on the shower.

Back in your room, you will have found a piece of paper. Go east and use the general key on the southeast door, then go southeast. Examine the nightstand and you will take a walkman and some ammunition. Go northwest, north, east and southeast into the bathroom again and you will see Gwendolyne here. Ignore her and go northwest, then use the general key on the east door and go east. Take the sheets. Use your scissors on the sheets to make a rope. Use the cassette in the recorder and activate it, then use the recorder on the bed.

Walk west twice and north. Use the general key on the west door, then head west. Examine the phone to learn a number. Return east, then go north, south and east to see the dining room is empty. Head west, north twice, south and east. Take the recorder and activate it to stop recording. Go southeast and use the toolkit on the shower.

Use the general key on the east door, then go east. Examine the nightstand and the bed. Open the recorder to retrieve the cassette. Use the cassette and the headphones on the walkman, then activate the walkman and use it on the phone.

Head to the dining room by going north twice and east. Talk to Mr Fuji, then show him the bottle of wine; he will give you a building kit. Next go west, north twice and south twice. Use the general key on the east door, then go east. Take the manual and examine the nightstand to get a calculator and an issue of Hustler.

Now head west and north. Use your combination on the lock here, then go west. Examine the dead body to get a lighter, and also take the gun. Use your ammunition with the gun, then use the lighter on the piece of paper to reveal a formula.