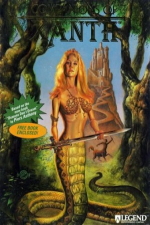 Companions of Xanth is a comedy adventure from Legend Entertainment, based on the book Demons Don't Dream by Piers Anthony. You take the role of Dug Mundane, a normal boy from Earth, who gets teleported through a computer game into the world of Xanth. After choosing a companion to help you, you begin a quest to save magic and the world of Xanth.

Start off by picking up the envelope, and reading the letter inside. Also pick up the yellow post-it note from the computer (note down the phone numbers on it). About now, the phone should start ringing - go into the lobby and turn the light switch on, then proceed into the kitchen. Answer the phone and accept the bet. While you're in here, pick up the teabag, and get the sandwich and mustard out of the icebox (fridge). Go and answer the front door when the doorbell rings, and pick up the package before shutting the door. Go back and turn your computer on, then open the package. Get the disk out of the box (and fill out the warranty card, of course...) and put it in the floppy drive. Close the drive and look at the computer screen. Learn as much from Grundy as you can, and then select Nada Naga as your companion. Wait three times for her to break out of the cavern.

The Land of Xanth

Head north-east to the crossroads, and take a cherry bomb and a buttercup (leave the butter in the flower, or it will melt). Head south-west and look in the spring to catch a glimpse of your opponent. After finding and chasing the bucket for a while, talk to the man at town and get the key. While you're there, pick up the rock. Unlock the gate and head north to the pier. Pick up the piece of sailcloth. Talk to Nada to have her free the rope and get you the anchor, and then head back to the log jam. Use the anchor on the log to free it, and then give the log to the headman (woodsmith as well!). Go east of town and set up a catapult using the boulder, board and rock, before getting Nada to slap the catapult with her tail. You've trapped the bucket! Whatever you do, don't kick it...

Pick up the bucket and proceed to the north-east. Talk to the eye on the door and it will eventually let you through. Open the screen and then the door. Walk down the fariway and pick up the egg. Go to Nuff's booth (north-east) and talk to him. Get the recipe by saying there are 2 censors. Put the egg, butter and sailcloth in the bucket. Go back to where the eye door was and place two chunks of eye scream in the bucket. Go back to town and take the covers off both lights. Continue north-west and get Nada to catch two cough drops, which should go in the bucket. Go back to the brook and fill the bucket three times to get the water you need. Use the empty buttercup to catch a firefly and put it in the bucket. You've made the solution. Before leaving, make sure you pick up another buttercup. Return to Fairy Nuff and give him the bucket. Take the two containers back to the ship and douse the censors with them. Talk to the headman and go back to see Mr Nuff. Take his advice and go to the north-west.

Alternate waiting for a door to appear and talking to Nada to make the door appear real. Open it and walk through.

Head south-east and refuse Metria's offer - she'll open the barrow door for you. Wander around in the barrow until Nada disappears temporarily. When she reappears and drags you back to the spring, refuse to drink. Metria will eventually reveal herself and give you a Nada finder (but will tell you the exact opposite of how it actually works). Go back into the barrow and explore again. You should really explore every room in the barrow (using the map makes it easy). Find the mortar and pestle. Look in the mirror when you find it. When you find the door that is ajar, take it (a jar). At the room with the switches, flip them all as they appear, and when they stop appearing, flip them all a second time and push the button to reveal a staircase. Don't look at Nada. Collect some moss in the jar and then talk to the manacles to free Nada. Head back to the tree and use the moss.

Head through the door, then north, east and south-east to find a fireman and his hotdog. Get Nada to put her hair in a bun, and then squirt mustard on it to get rid of the dog. Talk to the fireman, and then go and pick up the charcoal (from the north-east). Go back to the plaque and use the flattened paper and charcoal to get a rubbing of the recipe. Place the flower in the mortar and return to the fireman. If you wait, he will give you some firewater, which you should add to the mortar. Use the pestle on it to form dough, and put the mortar in the over-like hole on the left of the screen. Wait until the dough is golden brown and then remove it. After your conversation with the fireman and the hand, go to the firewall and throw the cracker at it. Wait a while and the wall will disappear. Continue north and throw the grappling hook (anchor combined with rope) through the hole so you can climb out.

Go north and agree to help the troll. Cross the bridge and pick up the hose (after turning off the valve), then go down into the troll's house. Go west into the lab and put the hose in the sink. Turn on the faucet and then swim in the well to get the key. Go out and give it to the troll, then solve his puzzles:

After solving all three puzzles (for maximum points) head out of the troll's house, north over the bridge, and then north-east into the lair of Com-Pewter. Answer the riddles with the following tiles (you should be able to find the answers in the Com-Pendium anyway):

When you get the last one ("gleans") you will note that the answer should require the letter T. Use either the tee from the golf course or the tea bag from the kitchen to complete the word. After talking to Grundy, open the metal door, place the virus inside and shut it again.

Go north-east and enter the cabin. Talk to Ma Anathe, then take her sock. Leave the cabin and talk to the ogress to the south-east, before going north-east to the agre boy. Put the sock over the vent to get the ball. Have the boy fix the cart, then push it to get a sail. Head north-east and take the windbag, then continue north. Attach the sail to the boat, open the windbag and untie the line from the mooring. The following are the answers for the guard's riddles:

Climb the mountain until you reach a sign. Take it and give it to Ma Anathe. She'll give you the ugly potion, which you should then give to the Ogress. She'll show you the path to Gap Chasm.

The Chasm and the Castle

Head south-east, and then continue north-east until you swap companions with Kim. At the base of the chasm, keep talking to Fracto the cloud at every opportunity and insult it, so that it snows on the dragon and protects you. You will be saved by Che Centaur and taken to the castle. Press the loose brick on the right of the gate, and then flip the switch that appears. Proceed through the archway. Draw the bridge on the path three times to effectively lower it. Walk across, knock on the wee door and talk to the eye (no use whatsoever!). Head south and then north-west to the head of Lok Pic and notice the cricket jumping around. Get Jenny to sense the dragon's dilemna, and then catch the cricket with the jar. You will now be able to walk over Lok Pic's tail to a grate and prise it open with the crowbar. Head down the tunnel and flip the 1st, 2nd and 4th switches. Talk to Humphrey and find out about the sword and the game. He will give you a hypnogourd - look in the peephole to enter the Gourd.

Head north-east, and ignore the zombie. Continue north-west and unlock the cellar doors with the Lok Pic's scale. Open the doors and go down. Take some twine from the top-right of the screen. Look at the skeleton and take its key. Use the skeleton key to unlock the cellar door. Open it and go north. Tie the twine to the lever halfway up the stairs to prevent them turning into a slide. Go up and talk to Nada. Press the red button on the wall. In the new room, take the pills and then read the third book from the left. Back in the other room, use the pills on the window pane, then take the cane. Go back upstairs and use the cane with the hook. Climb the stairs to the final landing. Throw the sword at the prize to end the game.

Back on Earth, answer the phone when it rings.